In television, when you bring in a big change of status quo, like destroying your heroes’s home base and refuge, it’s usually for the sake of new storytelling possibilities.  Sometimes situations can grow stale — be they environmental, psychological, or relational — and there’s often nothing more invigorating than a big, shattering change to shake things up and breathe new life into tired premises.  Well, nothing more invigorating other than quitting the show cold turkey and moving on to something better (for both the creators and viewers).

Based on last week’s preview, I was hoping for this week’s “Still” to be a fast-paced, hard-edged episode, the kind we rarely see, that would remind us of how dangerous the world of The Walking Dead is even without the horrific machinations of the evil that stirs within all of us (as seen through villains like the Governor).  Even by now, after almost four seasons, The Walking Dead the show still gains a lot of traction from the simple terror of being surprised and then bitten by a zombie, moreso than the comic ever did, and this seemed like a good opportunity to momentarily turn away from all of the forced, downer melodrama and dive straight into action-hero territory with a Daryl-centric episode.

“Still” was not a Daryl-centric action-hero episode.  Through most of its running time, I don’t think the writers knew what it was supposed to be.

The only remaining group still not really looked in on, Daryl and Beth have basically been running around, day and night continuously, trying to avoid walkers, while our other hero factions have been doing more sensible things like finding shelters and hiding out or travelling in armoured vehicles.  Barely surviving on things like adrenaline, snake meat, and the determination to not get killed until the most overtly dramatic storytelling moment possible, we pick up on Daryl and Beth’s story as Beth is ready to face the fact that she might not be a survivor in this harsh walker/biter world.  And she wants to have a drink before she dies.  To be clear, she’s not dying or anything, she’s just experiencing typical teenage growing pains alongside the survival-horror things going on around her.  Our mismatched duo find their way to a golf course where they’re chased (or at least broadly threatened) by walkers from without and within, descending deeper and deeper into the golf course’s clubhouse, which, if this were a grade nine discussion of metaphor, might result in the suggestion that the depths of the clubhouse represent the layers of our characters’ feelings. 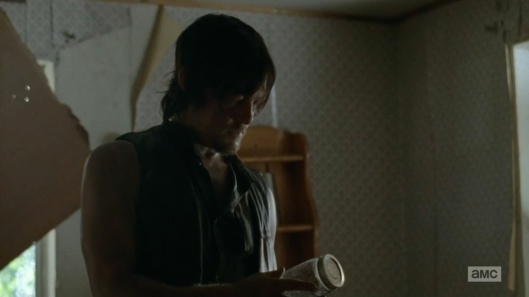 Ah, there’s nothing like moonshine from your own still.

Eventually the two make it out, abandoning the peach schnapps Beth finds for bottles of shine Daryl had hidden in a safehouse he and Michonne had found off camera at some unspecified time.  The two exchange deep miseries, including the revelation that Daryl had, in fact, been nothing but a straggler following his even bigger-of-a-loser brother when the walker attacks started (putting to rest the speculations started by Zach/Kid Flash all the way back in the first episode of this season).  And he had a bad father and childhood (shock!).  And he feels bad about Hershel’s death.

Then they burn the safehouse down in a burning, angst-ridden, against-all-logic-because-now-you-guys-are-on-the-run-again effigetic statement, the house representing their regrets (?), and y’know what the whole thing ends up feeling like?  Garden State, that overwrought, early to mid-2000s-era love song to feeling bad when you’re in your twenties.  You can almost hear the Frou Frou coming from the only-slightly-more contemporary (and much more on-the-nose) Mountain Goats track the producers chose instead.

I guess that’s a… kind of storytelling departure.  But it wasn’t worth blowing up the prison for.

-I think Beth is supposed to be, like, 15-16 in the show — and for a 28-year-old, she pulls it off pretty well — but it was hard not to watch she and Daryl throughout the episode and not see two full-grown adults. That kind of changes the overall feel of their plight from what I think was intended.