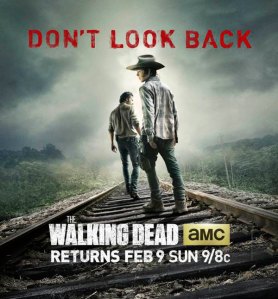 All images courtesy of AMC and Fox International Channels

For readers of the comicbook, by now we’ve gotten to a point in the show where it’s hard to say what’s going to happen with any real specificity.  Though it seems inevitable that most of our group will find the second major safe zone (after the prison) and follow at least the basic spine of that comicbook storyline, there are now way too many divergences to know where the show’s going in the near term.  For starters, Dale was still alive at this point in the comic (his much earlier death on the show was one of the first and biggest shockers for comicbook readers) and he played a major part in where the show seems to be going next.  There was no Daryl or Beth, Bob is an entirely different character, Maggie was never separated from Glenn, Tyreese had previously played a much bigger role and was now dead, Carol died a long time ago, and the only kids left were Carl and Sophia, the latter of whom had just started seeing Glenn and Maggie as surrogate parents (again, Carol — not Sophia — is dead in the comic; Sophia’s still alive to this day).

While none of that may necessarily be important to know for those who watch the show to the exclusion of the comic, for me, where we are now is at a serious crossroads.  While it may seem more exciting to not directly know what direction the show’s going, I also don’t have enough faith in the show’s producers to take a path that’s not largely, if not entirely inferior to the comic.  Right now I’m assuming the sanctuary will essentially be the same thing as the Alexandria Safe Zone, and I’m really just wondering how much of the Hunters storyline will make it into the show (and how much more time will be wasted trying to hammer themes into our skulls without much actually happening).

This week we alternate between Maggie, Sasha and Bob’s adventures in the fog and Daryl and Beth finding another house, this time a funeral home.  They don’t burn it down, probably because it doesn’t represent their inner demons, but rather food and maybe the kindness of strangers.  Thematically, “Alone” obviously represents the repercussions of the choices we make and the price and toll of faith (or lack thereof).  In Bob’s case, his faith was tested after so much time alone, his previous groups having all died out, and now restored and rewarded when he’s reunited with Maggie and Sasha, that trio’s storyline this episode essentially being little more than a temporary breakup over differences of opinion.  On the other hand, Daryl is reminded of how foolish it was for him to have faith in others as Beth gets kidnapped, driven away in a town car, as soon as he starts to believe in others, leaving him alone.  While the two stories serve the opposed sides of the thematic throughline reasonably well, I can’t help but feel that following Maggie, Bob and Sasha exclusively would have served the theme better.  Alas, for that to work any or all of the three characters would have to be much more compelling or further developed. 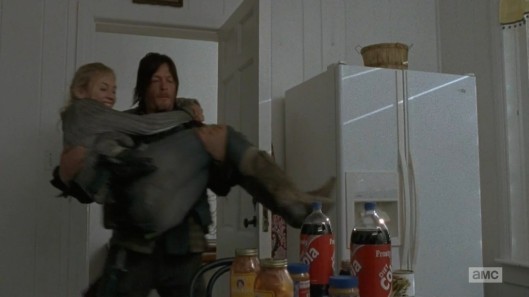 With only three episodes left in the season, we’re still missing a major opposing force.  The struggles of survival as our heroes make their way to Sanctuary isn’t enough, and the threat of walkers is becoming entirely too marginal and conventional, both for the viewers watching and for the characters surviving (even the actors seem a little bored killing zombies).  I guess the re-emergence of the Jerks I mentioned in my review of “Claimed” (from two weeks ago) suggests that there’s more to them and that they might become the villains we need if not the villains we want, but there just isn’t enough time to develop any real meaning to their potential threat, nor is there enough space to establish the villainy of Beth’s kidnapper(s).  Maybe a threat from the past will come back — one that doesn’t need much explanation — or maybe the producers will prove that they had an endgame in mind for this year, but so far most of the back half of this season has been wasted.

-I literally fell asleep watching Bob’s lone wanderings at the beginning of the episode.  Sure, I’d just gotten home from work and it was late, but I don’t think that’s the audience response the producers were looking for.