They say this one has a surprise ending

I’ve been a big fan of writer/director M. Night Shyamalan ever since his first movie. Well, actually, that’s not true, I’ve never seen Wide Awake, the Rosie-O’Donnel-led comedy he wrote and directed from 1998, nor did I even know about his 1992-released Praying with Anger until I bothered to look up his film credits. No, the M. Night Shyamalan I’m speaking of, the one we’re probably all thinking of when we dig into the rosier side of our movie memories, is the storyteller, the wunderkind, “The Next Spielberg”, the man who brought us The Sixth Sense. And… actually, I never saw The Sixth Sense either. ‘Cause somebody told me how it ends. I still look back on those early Shyamalan movies fondly, however, because even if I was never able to experience what it was like to sit in one of those theatres in 1999 — without any expectations as I beheld a gritty, suspenseful, unexpectedly well-told movie about seeing dead people with a monumental twist ending that would change everything — I had a pretty similar experience when I did see his follow-up, Unbreakable, the year after. Without anyone spoiling it. END_OF_DOCUMENT_TOKEN_TO_BE_REPLACED 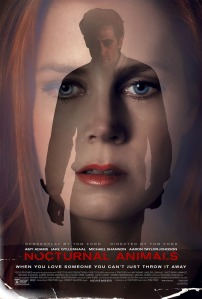 Okay. It’s the 17th. Of December. It’s almost Christmas. So here’s a review about the effect a sadistic, cruel book has on a lonely, isolated, and unhappy woman. It also starts off with a deeply unsettling sequence of fairly explicit nudity. And it’s December 17th, almost Christmas. Man, we gotta plan these things better. I guess there’s always next year.

In a lot of ways I think December is actually the best time of year for new movies, with a mix of low-brow, seasonally oriented fare and critically acclaimed features being released in near equal measure. While Oscar season — that time of year when the studios pump out their most prestigious, most award-worthy material in a vain attempt to eke out a profit from films that might not have been otherwise noticed — unofficially starts in November, by the time we get to December, we finally have a real measure of what the overarching narrative will be of that year in movies. We’ve had or will soon have the chance to see most of the films we’ll ever see in that year, and we can begin to make out the shape of the Oscars to come. END_OF_DOCUMENT_TOKEN_TO_BE_REPLACED

What a bunch of jackasses

Green Room images courtesy of A24

I’m a pretty critical person, both in real life (of hypocrisy, bureaucracy, “the man”) and in writing (with movies, TV… y’know, all the easier stuff we discuss on this website), but one thing I’ve usually stayed away from and we’ve generally steered clear of here on GOO Reviews is music criticism. There’s just something about the culture of music (a lot of things actually) that makes an honest, heartfelt analysis of it a really difficult thing to do for anyone who’s written for this website (at least so far), and it’s just something we’ve largely been able to avoid to this point. Until now, until I watched Green Room, a movie in many ways about music.

So here it goes. END_OF_DOCUMENT_TOKEN_TO_BE_REPLACED

The original Cloverfield was a movie that I was extremely excited about, mostly because of its great marketing campaign. Remember, this was arguably the point in Internet history just before it would become such a significant part of our daily lives, only months before the iPhone would be connected to high-speed mobile networks, but there were still hints all over the Internet of what Cloverfield was, with cryptic websites about the odd novelties and [evil?] corporations in and around the movie, and even social media pages of people who lived inside of the Cloverfield universe. END_OF_DOCUMENT_TOKEN_TO_BE_REPLACED

There’s a breed of movie, let’s call it an “Oscar movie”, that we all know, that we’re all aware of, and that many of us may even have an opinion on, but that few of us have actually seen. The joke of the Oscars, and it’s a joke that will continue to endure far past the recent James Franco/Anne Hathaway, “We Saw Your Boobs”, #OscarsSoWhite controversies, is that nobody sees these movies. I mean, who’s seen Room? Or Brooklyn? Or Spotlight? Actually, I’ve seen every Best-Picture-nominated movie this year other than Bridge of Spies (because it looked boring), but the argument still stands amongst most people. But who are “most people”? Is “most people” supposed to represent me? And how many movies do “most people” see every year anyway? According to 2014 statistics from the Motion Picture Association of America, “most people” see fewer than six movies a year. If nothing else, purely by number of movies seen it’s pretty bad odds that “most people” will have seen any or all of the Oscar nominees, even this year when two of them (The Martian and Mad Max: Fury Road) were pretty big, pretty mainstream hits. And that’s not even considering other variables like taste, preference, or availability, and it leaves out that, regardless of what movies people do or don’t want to see, “most people”… well, they suck. Don’t get me started on “most people”. END_OF_DOCUMENT_TOKEN_TO_BE_REPLACED