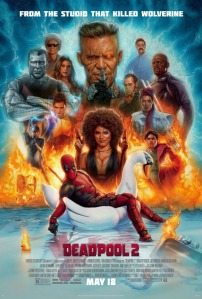 Deadpool’s never really been my kind of comicbook hero.  He’s dangerous, unhinged from reality and doesn’t take life seriously, but not in a frightening, Joker kind of way.  Deadpool’s more of an annoying, won’t-shut-up, Spider-Man type, only, unlike Spider-Man, he’s not masking his own insecurities or expressing himself in a way he can’t in real life.  No, Deadpool’s just annoying, and he constantly f*cks with people because that’s who he is on the inside, and I don’t really like that kind of character (or person).  For a long time that was fine too, the only type of person that liked Deadpool was a certain type of comicbook nerd, a subset of a group of people nobody in reality cared about or wanted to spend any time around anyway, but then, all of a sudden, Deadpool was, like, the biggest deal in the world, the titular lead character of his own titular action-comedy movie, and played by one of the most comically handsome and spastically charming men in the world.  And by the end of all of that, I didn’t really like Deadpool much more. END_OF_DOCUMENT_TOKEN_TO_BE_REPLACED

END_OF_DOCUMENT_TOKEN_TO_BE_REPLACED

Cobra Kai Never Say Die!  Is that right?  I might be getting my beloved ‘80s references mixed up. 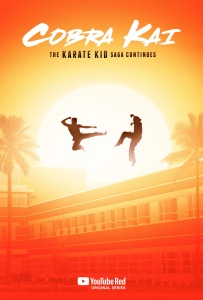 I have a weird relationship with The Karate Kid.  I mean, I’m mostly a ’90s kid, but I was born in the ’80s, a child of two worlds one might say (if one were being intentionally overdramatic), so even though it may have taken until the ‘90s for me to get to them, many of the biggest properties of the ’80s still managed to have a significant influence on my life.  In fact, four of my all-time top five favourite movies — Big Trouble in Little China, Die Hard, Back to the Future, and Transformers the Movie — are properties firmly planted in the ’80s.  And that’s not something I planned, I only just realized that as I began to write that last sentence, but 1984’s The Karate Kid was definitely a movie that never sat quite right with me, and there are two reasons for that. END_OF_DOCUMENT_TOKEN_TO_BE_REPLACED

Life of the Party

END_OF_DOCUMENT_TOKEN_TO_BE_REPLACED 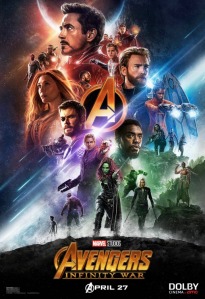 This world doesn’t make sense any more.  Californians are intentionally drinking untreated, unsterilized water they’re buying “off the grid” while people in Flint, Michigan still have too much lead in their taps.  A ridiculous, Immortan-Joe-esque ignoramous is the President of the United States.  Vaping is a thing.  And Thanos is a major figure in our popular culture.  Those four things might seem unrelated at first, but I’m pretty sure they all have megalomania and super-villainy at the heart of their origins.  But we’re mostly here to talk about that last one, Thanos, today, because, as of April 27, 2018, people — normal people all over the world — suddenly knew who Thanos is.  And the opportunity to talk about Thanos?  As if he was something or someone people might know about?  Someone people might actually care about?  That makes almost no sense!  That’s almost insane!
END_OF_DOCUMENT_TOKEN_TO_BE_REPLACED