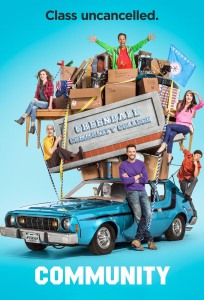 I don’t know if its the playback errors, the lousy buffering, the lack of a consistent HD signal, the need to use a geo-relocating VPN, the mobile app that’s not available in Canada, or the pause screens that made it impossible to take a good screen cap, but there was definitely something off about this season’s Community debut. I know beggars can’t be choosers, but Yahoo Screen really sucks even outside of the whole “We don’t care about Canadians” aspect of Yahoo’s distribution system.  Look, all I’m really saying is that there’s a reason I spent $30 on my computer speakers and $2400 on my home theatre speakers, and it’s not just so I could make myself feel like a big man when I tell people how much I spent on my home theatre system.  I just don’t like having to sit upright, stare at a tiny video window in a web browser, and use a service that tricks the servers into thinking I’m pinging from a different country when I’m just trying to watch a TV show (plus I got a pretty big discount on said speakers).

So here’s season six, the last of those prophesied before the fateful movie, and it comes to an even smaller than usual gathering of us here in Canada, forced to resort to online trickery and/or outright digital theft. Is there story left to tell? Do any of us still care? Has anything really changed other than another cast member leaving? Is there any more reason for the show to continue than a promise from long ago, that was actually about an even more ill-fated show called The Cape? It used to be that we could at least say “Who cares, it’s on TV” as we lingered back into the self-imposed oblivion of our couches and recliners, but this time around, they’re really making us work for the show. We can only hope that it’ll be worth it.

5. “Laws of Robotics and Party Rights”

What a long, strange trip it’s been on our way to five seasons (in what, by now, will pretty much have to be six seasons and a movie).  Community is my second favourite show of all time, and, despite my reservations about its more recent outings, I’m genuinely excited about the show’s potential going forward.  Sure, Chevy Chase’s Pierce is long gone and Donald Glover’s Troy is not long for this timeline, but Dan Harmon’s back, and that’s absolutely everything I need to believe that we’ll get a show at least worth watching again, if not outright worshipping (again).

This time around, Jeff’s back as a teacher, the gang’s back because Jeff’s back, the magic’s back because Dan Harmon’s back, the show will re-find its footing after a lost season barely passed, and we’ll finally return to the fetishistic post-meta modernity we all love to watch get shoved up its own ass.