It’s been two years since we’ve had a paintball episode, and four since we’ve had a good one. The first two — “Modern Warfare” from season one and the two-part “A Fistful of Paintballs”/”For a Few Paintballs More” from season two — are episodes that helped to define the early years of the show and still stand as some of the greatest episodes in the series. You can’t just close every season with “a flawless, postmodern homage to action-adventure mythology” under the guise of a campus-wide paintball game, however, so it’s a genie that’s largely been back in the bottle ever since the end of season two. We did have the gas leak year’s failed attempt to refresh Community paintball (an attempt [and year] best left forgotten) and last year’s thematically similar “Geothermal Escapism”, a game of hot lava that engulfed much of the school grounds, but for the most part, paintball as a concept has been allowed to rest and recharge its batteries until a true and proper successor could be produced. Words like “rested” and “recharged” are far from what I would choose to describe most of what we’ve seen this season, but mercifully, the decision to pick the lofty mantle of paintball back up here, near the end of season six (and quite possibly the series), turned out to be the right one. 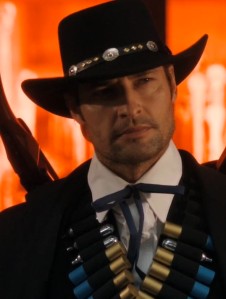 Living up to its namesake, “Modern Espionage” is much more of a covert affair, a cat and mouse game between the Greendale Activities Committee and whatever malevolent force is funding the latest round of on-campus brutality. With creator Dan Harmon, director Rob Schrab, and writer Mark Stegeman well aware of the role paintball has played in the Community framework and how long of a shadow it’s cast on everything that’s followed, “Espionage” manages to act as the same type of loving tribute to action movies that its predecessors were while also being a meta-narrative wink to the fact that it never made that much sense to have an entire school go crazy in a destructive orgy of paintball mayhem even once. For paintball to truly work again for a third time, Harmon and co. knew they had to find a take strong enough to add to the core concept without reducing it, and this time the remaining members of the Study Group, a.k.a. the Greendale Seven, a.k.a. the Save Greendale Committee, find themselves not only fighting against SILVER_BALLZ, the apparent agent of chaos in league with those funding the latest paintball outbreak (à la season two’s Black Rider), but the very idea of Community paintball itself as Frankie works to prevent it from destroying the school a third time. Which is the fiscally responsible thing to do. She is in charge of that stuff.  Also I think somewhere in there is some message about growing up that, frankly, went right over my head, probably for lack of caring or wanting to notice.

There’s not much to say about “Modern Espionage” other than it’s basically perfect all things considered. It’s not the type of episode you necessarily break down or unpack compared to the more complex episodes of the series, it’s not wall-to-wall laughs, it’s certainly not inviting to newcomers to the show (especially the Vicki and Garrett stuff), and it’s not even really that clever once you get beyond what exactly is happening and mentally reconcile with how ambitious episodes like this are. What makes “Modern Espionage” and its season one and two forebears work is ultimately how earnest they are. We all understand their tongue-in-cheek nature, but it’s also clear that everyone involved is all in. As Abed points out early in the episode, it’s incorrect to refer to them as a parody rather than a loving homage. It’s a lack of understanding this that kept the gas leak year’s paintball episode from working, and frankly we’re lucky we got something as good as “Modern Espionage” this late in the game. It’s fast, smart, exciting and cinematic, and a huge breath of fresh air compared to the rest of this season. It’s a spot-on triumph of an episode that’s only possible at this high a level and with this much of a payoff after this many years of waiting.

Before we get started… does anyone want to get out?

If we’re being critical, however, which is sort of the point of me writing these things, “Espionage” is fundamentally lacking the emotional core at the heart of its predecessors. Especially with season two’s “A Fistful of Paintballs” and “For a Few Paintballs More”, there was a genuine emotional investment (or at least one to be had for those looking) in that the entire student body was fighting together to save their school. It’s not “Modern Espionage”’s fault that saving Greendale is a theme now well-trodden and surpassed, but keeping things undercover just to appease Frankie is poor substitute reasoning for how and why this third paintball go-round turns out the way it does. I like Frankie, but not that much, not enough to hinge an episode’s resolution on. Let’s not forget, though, that this late in Community’s lifespan and after all the crap the show’s been through, it’s more appropriate to judge season six episodes against others of its type. It’s especially in that regard that I call “Modern Espionage” a nearly flawless episode — relative to season six.