King of the Monsters?  That’s an awfully binary way of looking at kaijus!

If you’re one of those [very] few people who’s spent a lot of time around this site over the years, reading our reviews, getting a sense of where our tastes lie, and maybe even paying a bit of attention to our overall website design, you might think that we’re all of us big time kaiju fans round these parts.  We’ve covered most of the major monsters movies that have opened in the last seven years.  There’s giant monsters in at least one of our five randomly generated banner images.  And, at least for me, Pacific Rim ranks almost irrationally high on my top 10 favourite movies [monster or not] of all time.  And that’s not even mentioning my ethnicity which all but gives me no choice but to be into things like giant monsters… and martial arts and… like, math probably.  But I’m not a kaiju guy [or a math guy].  Not really.  I’ve never watched Evangelion and have no plans to.  I couldn’t recite to you the names of any famous giant monsters beyond Godzilla and MechaGodzilla.  And I could count the number of Godzilla movies I’ve seen (including the subject of this review) on one hand even if two of that hand’s digits were forcibly removed (note, I didn’t say it was going to be my hand I was counting on).  And yet there’s still something inside of me, something foundational, something primal, that draws me to movies like Godzilla even if those things aren’t quite enough to make me a full-blown fan of the genre.  And I bet those same things are in most of you too. END_OF_DOCUMENT_TOKEN_TO_BE_REPLACED

This time the danger’s amped up to… twelve?

The first time I fully realized that nostalgia was a real and powerful thing and, more importantly, a definite consumer force was in the early 2000s when my mind started drifting back to childhood, I first started to remember how cool the Transformers were, and I went out to buy an anniversary edition of Optimus Prime, a toy I never owned in my youth.  Of course, I’m a little too young to have been there for the beginning of The Transformers, missing out on the show during its original TV run and not seeing (Naziing?) the 1986 movie until the early ‘90s, but I definitely felt its presence in each of its Saturday morning cartoon/toy/commercial successors, from M.A.S.K. to Teenage Mutant Ninja Turtles to COPS.  Remember COPS?  The Central Organization of Police Specialists?  Every cop had some cybernetic gimmick?  “It’s Crime Fighting Time?”  No? END_OF_DOCUMENT_TOKEN_TO_BE_REPLACED

When the hell did kid actors get this good?

Shouldn’t somebody be saying “There’s a storm coming”?

The odds are you’re never going to talk to Tom Cruise.  I mean, that’s pretty obvious from the perspective of logic and reason and cosmological significance — the odds are you’re never going to talk to a lot of people, important or otherwise.  Even you and I are probably never going to meet or have a conversation (and you come here to read our reviews all the time, don’t you?). What I mean when I say you’re never going to talk to Tom Cruise is that you’re never going to get to know Tom Cruise.  You’re never really going to meet him.  Maybe you’ll be allowed to ask him a question if you’re lucky and get chosen out of a crowd at a press junket, maybe you’ll hear what seems like a personal anecdote about him from someone you know who works in Hollywood, but Tom Cruise, a world-famous actor, a franchise unto himself and an icon who’s likely to spend the rest of his life in the public eye and leave a body of movie work behind that will be watched, loved, and even studied for generations after?  That’s not someone you’ll ever have a personal conversation with or learn a lot about even if you do somehow find yourself in a position to say something to him. END_OF_DOCUMENT_TOKEN_TO_BE_REPLACED

So, I’ve never actually seen the original King Kong, not all the way through or all in one sitting at least. That’s not something I regret either despite being ‘the movie guy’ in my group of friends and despite being a person who prides himself on his knowledge of movie history. It may ultimately be a failing on my part, but I just don’t have a great deal of patience when it comes to the classics, and, as has been the case with Citizen Kane, The Graduate, or Scarface, I doubt that I’m going to see the original King Kong anytime soon. I’ve seen parts of it of course, the same way we’ve all watched an episode of The Big Bang Theory, pressed the wrong floor in a cramped elevator, or eaten at Subway, but there was never any intentionality behind those viewings, so while I have a pretty good idea of what the movie was about, I don’t really know what people see in it. But I have seen the 2014 Godzilla. END_OF_DOCUMENT_TOKEN_TO_BE_REPLACED 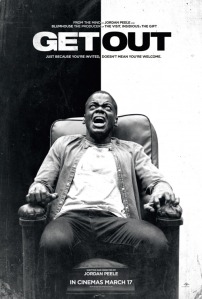 Get Out images courtesy of Universal Pictures

One of the most cogent and convincing arguments I’ve ever heard in my life was about cheating:

“If you can take advantage of a situation in some way, it’s your duty … to do it. Why should the race always be to the swift, or the Jumble to the quick-witted? Should they be allowed to win merely because of the gifts God gave them? Well I say, ‘Cheating is the gift man gives himself.'”

Eugenics isn’t explicit in that statement, but I think it is implicit, and eugenics, or at least the idea of pre-determining a preferred path based on your beliefs on superior genetic traits, is an idea at the core of Get Out. END_OF_DOCUMENT_TOKEN_TO_BE_REPLACED

They say this one has a surprise ending

I’ve been a big fan of writer/director M. Night Shyamalan ever since his first movie. Well, actually, that’s not true, I’ve never seen Wide Awake, the Rosie-O’Donnel-led comedy he wrote and directed from 1998, nor did I even know about his 1992-released Praying with Anger until I bothered to look up his film credits. No, the M. Night Shyamalan I’m speaking of, the one we’re probably all thinking of when we dig into the rosier side of our movie memories, is the storyteller, the wunderkind, “The Next Spielberg”, the man who brought us The Sixth Sense. And… actually, I never saw The Sixth Sense either. ‘Cause somebody told me how it ends. I still look back on those early Shyamalan movies fondly, however, because even if I was never able to experience what it was like to sit in one of those theatres in 1999 — without any expectations as I beheld a gritty, suspenseful, unexpectedly well-told movie about seeing dead people with a monumental twist ending that would change everything — I had a pretty similar experience when I did see his follow-up, Unbreakable, the year after. Without anyone spoiling it. END_OF_DOCUMENT_TOKEN_TO_BE_REPLACED

What a bunch of jackasses

Green Room images courtesy of A24

I’m a pretty critical person, both in real life (of hypocrisy, bureaucracy, “the man”) and in writing (with movies, TV… y’know, all the easier stuff we discuss on this website), but one thing I’ve usually stayed away from and we’ve generally steered clear of here on GOO Reviews is music criticism. There’s just something about the culture of music (a lot of things actually) that makes an honest, heartfelt analysis of it a really difficult thing to do for anyone who’s written for this website (at least so far), and it’s just something we’ve largely been able to avoid to this point. Until now, until I watched Green Room, a movie in many ways about music.

So here it goes. END_OF_DOCUMENT_TOKEN_TO_BE_REPLACED