If you’re anything like me (and let’s hope you’re not), you’ve only seen bits and pieces of Godzilla movies (the 1998 Matthew Broderick one doesn’t count), but you’ve never watched an entire Godzilla movie from beginning to end. For me, if anything, my biggest and best exposure to the Kaiju genre came from last year’s Pacific Rim. As much as I may have fallen in love with Pacific Rim, however, even I have to admit that it was very over the top and didn’t make a hell of a lot of sense. Giant robot Jaeger suits with inconsistent weaponry was your best bet? And when that plan failed, you thought you’d just build big walls around your cities? And the Jaeger plan failed in the first place just because the Kaiju kept getting tougher and not because fighting force (Kaiju monster) with force (Jaeger suit) results in massive destruction?

On the other hand, the 2014 version of Godzilla is incredibly grounded and as plausible as such a concept could be. Sure, it has skyscraper-plus-sized monsters devastating cities and taking thousands of human lives, but it’s also a deeply personal story built on a strong foundation rather than just an excuse to show giant monsters killing people and each other.

Fifteen years ago (which is, alarmingly, only 1999 rather than the late-1980s like it should always be), Doctors Ichiro Serizawa (Ken Watanabe) and Vivienne Graham (Sally Hawkins) have been called to a Philippine strip mine where they examine the remains of what appears to be a gigantic skeleton and correspondingly sized egg pods. Meanwhile, a nuclear plant in the Janjira area of Japan melts down, leaving plant supervisor Joe Brody (Bryan Cranston) and his son Ford without a wife and mother and forced to abandon their home when the area is evacuated. Today, Ford (Aaron Taylor-Johnson) is a U.S. Navy bomb disposal specialist with a wife (Elizabeth Olsen) and son, called back to Japan to bail out his father for trespassing in the Janjira quarantine zone. Though the two have a strained relationship, Ford wishing his father would leave their former home and the ghosts they’ve left behind alone, Joe convinces his son to travel with him where they discover that not only is the area free of radiation, but weird goings-on are afoot at the remains of the Janjira nuclear plant. Which, of course, leads to giant mutant monsters, Doctors Serizawa and Graham, who have been working for the Monarch organization, and a vast monitoring effort around the cause of the plant’s original meltdown, a hibernating Massive Unidentified Terrestrial Organism (MUTO) at its radioactive heart.

Y’know, Godzilla and Karl Rove actually have a lot in common. One’s a monster whose work has caused the unnecessary deaths of thousands, and the other’s Godzilla.

As is the case with most monster stories, Godzilla himself turns out to be a hugely destructive, but largely misunderstood creature, in this case symbolic of man’s inability to control nature (and, as always, raising the question of who or whom is or are the real monster[s] — p.s., it’s man). The MUTOs turn out to be the main threat, descended from a time when the Earth’s surface was radioactive, our modern-day machinations with nuclear energy causing their return. With an opening sequence composed of military footage of the Bikini Atoll hydrogen bomb tests, we find out that Godzilla was there, drawn to the radiation, his presence intentionally hidden and studied by the Monarch organization this entire time. Dr. Serizawa has come to believe that Godzilla is nature’s answer to keeping the MUTOs in check (proving that even nature doesn’t have a better plan for fighting giant monsters than with more giant monsters?). It’s only natural to look on a figure like Godzilla in terror, just as it’s in our nature to fear anything bigger than us and likely to kill us with a mere gesture, but unlike most monster movies, Godzilla mostly avoids taking potential misunderstandings too far, with a military that takes a more pragmatic approach to Godzilla, assisting him where possible rather than blindly attacking him and being hell-bent on destroying all monsters. I thought that was a particularly well-done part of the movie and a trope thankfully avoided; there’s only so much military stupidity one can take, even in movies like this. For his part, Godzilla makes it relatively obvious that he’s not looking to harm anyone, a fact well illustrated when, on more than one occasion, the movie shows his tell-tale back spikes gliding through the water and towards humans as a building force of terrifying oncoming destruction before he simply swims underneath them on his way to taking on the MUTOs and leaving everyone intact.

As a film, and this kind of feels weird to say, Godzilla’s greatest strength lies in its sense of restraint. For a franchise associated with a certain garish visual quality, a certain amount of ridiculousness, and a high level of kitsch, you don’t even really get a good look at Godzilla until about halfway through. There’s a quiet desolation to most of the scenes that, combined with the movie’s generally muted colour palette, brings to mind the way the original movies looked, the darkness of the scenes calling for a near black-and-white visual sensibility. It’s a deeply effective and deeply evocative take on the latest in a film franchise that’s gone through several iterations, and it’s an approach that suits the content of this movie as well as acts in service of fans who’ve stuck around the series for the last sixty years. The HALO drop sequence is particularly memorable, its eerie atmosphere showing us the scale of human efforts relative to nature as our heroes descend from high altitude, through the clouds, through the destruction, and to their destination as they attempt to play their own part in saving their world. 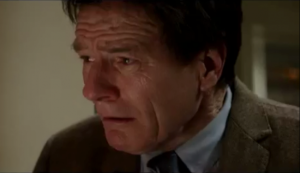 Now… SAY MY NAME… and… pretend I don’t look like I’ve been crying.

Though the human perspective of the film is where it gains most of its traction, the human element is a little underplayed, with most of the parts relatively thankless in comparison to everything else that’s going on. One notable exception to this is Bryan Cranston’s Joe Brody, the father of Ford (our ostensible hero). Cranston brings such a sadness and anger to the role that he leaves an indelible mark all over the movie, even during the many portions he’s not a part of. His hunt for the truth of what happened — fueled by the death of his wife (and the part that he played in that death) — informs the manic, but depressive energy he wields. His impassioned pleas, the desperation in his speech, the general way he delivers his lines as a hollowed-out shell of his former self are all surprisingly effective, particularly considering how old-hat his part really is in movies like this. Even though he doesn’t really have a direct contribution in the biggest discoveries of the film or in bringing the MUTOs down, without Cranston’s Joe, I really do feel like a lot of the humanity of the movie would be lost. Like all of the parts in the film, Joe doesn’t really deviate from character type, but Cranston’s performance stands out as just on the right side of gripping without descending into or relying on over-the-top delivery.

The way the rest of the roles are played, I’m not sure if the actors simply didn’t have big parts to play or if the director chose to underplay their parts. No character is underserved, but it’s clear that Godzilla is the star of the film. The human story we’re told lies largely in its economy of story and the way its scenes are shot. Though the characters all play to type, they’re at least given the room to breathe, to show us who they are without ever feeling like the scenes are dragging or leaving us too anxious to get back to the monster mash. 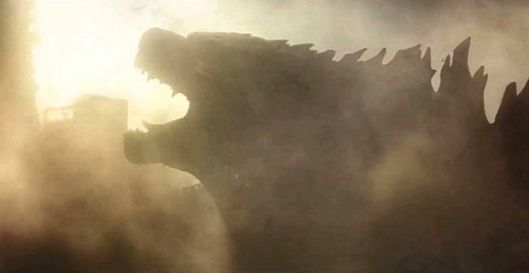 Ultimately and because of the rampant restraint on display all over the screen, when it comes time for Godzilla to lay the final beat down on the MUTOs, it feels like the fruition of fantasy that it should be rather than an overdone and ultimately tiring exercise in frivolity and excess (I’m looking at you, Transformers: Dark of the Moon). The action’s always well composed and it’s always easy to tell what’s going on, even in the many scenes where you, alongside the soon-to-die onscreen humans, slowly realize that the MUTOs have been hiding in plain sight, camouflaged in the darkness and foliage that make up the scene’s setting. Even the more exotic elements of Godzilla lore like his atomic breath are handled with restraint, held in reserve and saved for maximum impact.  And that’s really the fundamental difference between a movie that’s considered and thought out rather than stupid and overboard (again, I’m looking at you, Transformers: Dark of the Moon).

Every part of Godzilla adds up to a film you follow intently rather than grow impatient with or tired of. I think the only person who shouldn’t see Godzilla is a person who’s alarmingly un-cinematic, a person with an almost inhuman distaste for the inherent strengths of the two-hour, widescreen story format. It’s a movie that’s as epic and as small and as meaningful and as gleefully destructive as it can be depending on what the scene’s calling for, and even though it probably won’t be your favourite movie of all time (and probably not even of this year), it’s the kind of movie that you’ll be glad that you saw in the theatre rather than waiting to watch at home.

-It’s funny how a proper adaptation for next year’s Avengers movie would see super-powered siblings Quicksilver (Aaron Taylor-Johnson) and the Scarlet Witch (Elizabeth Olsen) making out more than they do than in this movie as a young, married couple.

-Ken Watanabe’s a compelling on-screen force, but you have to admit he’s also lucky he’s found such traction in American movies. Even though there aren’t a lot of American movies calling for Japanese men of a certain age, he seems to pretty much get all of them.