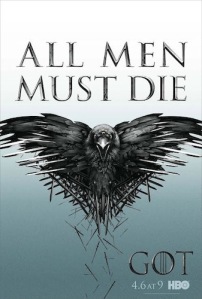 In my first year of university, I spent a fair amount of time in the library. Apart from a couple of guys in my classes, I didn’t know anyone in my year and didn’t feel comfortable sitting around by myself, especially because I went to a sketchy campus in the west end of the city. So in between classes I went to the library. And it wasn’t long before I stumbled across A Song of Ice and Fire.

I’d heard things about it. For one, there were two families, the Starks and the Lannisters. For another, a new book had just come out after a ten-year wait. And for yet another, the show Game of Thrones had just begun, based on the first book in the series.

I read the first book and watched the series at the same time. In between episodes, I would catch up in the book. But it wasn’t long before I had to watch ahead, because I couldn’t bear not knowing what happened next.

This was nothing like any fantasy I’d ever read. I was accustomed to The Chronicles of Narnia and The Lord of the Rings, not whatever this violent, incest-filled politifest was. But it was incredible. There was a whole world in here that had come out of someone’s head, and it was like a bucket of cold water after all the tame stories I was used to. (Well, maybe not water. A bucket of blood. That sounds more like this show.)

It’s painful having to wait so long between seasons, but it’s even worse having to wait so long between books. Yes, I eventually caught up on the series. I knew about the Red Wedding, and I know what happens at the end of season 4. And I am just super excited to talk about it for ten weeks without giving you any spoilers or rubbing it in. (Probably.)

If you’re not caught up yet, watch the whole thing below.

Caught up now? Good. Let’s get started, shall we?