Particularly In comparison to the last two episodes, both, in their own ways, gut-wrenching goodbyes to two long-standing cast members, “Analysis of Cork-Based Networking” is a relatively light episode.  It’s very plot-based, not particularly dependent on established relationships or longstanding quirks of the series, and it’s probably the closest the show’s felt to season one in a while.  Which isn’t a bad thing.

In establishing the “Save Greendale” Committee, Annie splits the remaining members of the Greendale Five (née Seven), along with Professors Duncan, Chang and Hickey, into teams to tackle a variety of pressing issues around the school, among them updating the Greendale Student Census, planning the decorations for the mid-term dance, and rehanging the bulletin board in the cafeteria.  So, three tasks, three storylines.

Of the three tasks, the bulletin board proves to be the most difficult, involving a labyrinthine series of interdepartmental give-and-take.  Along the way, we meet first time guest stars Nathan Fillion (of the custodians), Paget Brewster (of IT), and Robert Patrick (of the parking division), each representing different interests, pulling Annie and Professor Hickey into a tangled web of co-dependent favours and relationships as Annie learns a valuable lesson in backdoor dealings and staying true to her ethics.  Or something.  Meanwhile, Jeff, Shirley, Chang and Professor Duncan have to cover for somehow unknowingly making decorations of a highly controversial recent event for the dance, and Britta and Abed seem to entirely ignore their task in favour of one-upping each other in giving away spoilers in Bloodlines of Conquest (a fake [I almost wrote fictional, but this whole show and that series is fictional] Game of Thrones-esque TV show/book), Abed having watched the entire show thus far and Britta only having started and then deciding to read ahead in the book.

I just like how little sense this picture makes out of context.

It’s all very nice and good and very “Jokey Jokerson” at a level only notably (rather than the usual far) above normal sitcoms, and even though it doesn’t really further the overarching stories of our characters, it’s a nice breather before we go to the midseason break.  The conventional nature of the episode along with the plethora of guest stars is what serves to make the episode feel so much like a year one episode (back when NBC thought it might become a big hit and would commit to things like guest stars and full-season orders), but oddly, unlike any episode in that first year, in taking such an Annie-centric viewpoint, it becomes one of the first episodes where Jeff really doesn’t feel like the main character anymore. 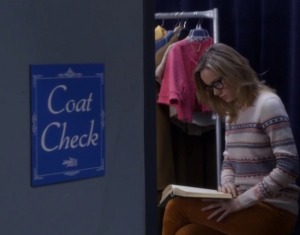 “Analysis of Cork-Based Networking” is a slightly above average episode and, therefore, worthy of a 7.5.  Crucially, though, just before the episode ends and after Britta ruins a potential romantic relationship for Abed in the duo’s further attempts to spoil Bloodlines of Conquest, Abed gets a chance at reconnecting with Rachel (Brie Larson), one of the few characters worth remembering from one of the few episodes worth watching from the Gas-Leak Year.  Turns out the two just never called each other and that’s why we never saw her again (and not just because last year’s showrunners never thought ahead enough to plan for Abed having a girlfriend).

To be honest, guest starring Brie Larson as Rachel in a second Community appearance is almost like a cheat code for me, and just like Iron Man 3 got a full point score above its actual quality from me for having completely ripped off scenes and scenarios from Lethal Weapon, so too does “Analysis of Cork-Based Networking”.

-Something that slightly undermines the episode is that so much of the resolution of Annie’s problems is dependent on the Dean’s approval as pretty much everything else about Dean Pelton in the show has been about immasculation, dehumanization, and a lack of power on his part.

-“I detonated a mollusk.”

-It’s kind of hilarious that they need to use a green screen just to make the cafeteria set look empty.

-A Paget Brewster-looking woman (Debra in IT) has been working at Greendale?  Seems like someone Jeff should have met three to four seasons ago (à la Professor Slater).

-This toast isn’t over until everyone says, “Easy-peasy, lemon-squeazy!”  Everyone!

-Make sure to watch the text crawl on the news show Professor Hickey’s watching towards the end of the episode for an update on how Troy’s voyage is going.

-Rachel:  “I guess I could’ve put in some effort… I started this coat check without permission anyway.”  Veiled denouncement of season four?

-This is our last week of coverage as NBC’s schedule gives way for Olympics coverage.  See you all (if any) at the end of February and our seventh episode of Community’s great comeback year.