Sometimes it’s easy to forget just how big the Community cast still is, with four remaining principals, one secondary character, two recurring guest stars, plus whatever Chang is. With a cast that size, it can be hard to find something for everyone to do, and even though “Queer Studies and Advanced Waxing” is comprised of three very separate stories and an eight-minute-longer running time than network sitcoms, the episode still had to shuffle three of its core characters out of its main stories.

Our lead story features Dean Pelton’s token ascension onto Richie and Carl’s (that’s right, they have names!) school board due entirely to the Dean’s seemingly apparent homosexuality. It’s not a very interesting or original premise, but it offers us perhaps the first in-depth analysis of the Dean’s preferences. At least in terms of sexuality, Dean Pelton is a lot like The Simpsons’ Smithers in that homosexuality is a little reductive and only part of the story. In Smithers’ case, the writers eventually just went with an openly gay lifestyle, probably because there weren’t that many gay characters on TV at the time, but originally Smithers was less gay and more just in love with Mr. Burns. In the words of Simpsons showrunner Al Jean, Smithers was a “Burns-o-sexual,” which was hilarious, especially given how repulsive Mr. Burns was on every level. For the Dean, homosexuality may be one of the bigger pieces of the puzzle, but it’s still only one of many. In his own words:

If coming out is a magic show and gayness is a rabbit in a hat, I’m one of those never-ending handkerchiefs.

Probably one of the best analogies I’ve ever heard. We’ve seen atypical fetishist behaviour from the Dean before, all vaguely suggestive of varying levels of omnisexuality and paraphilia, but I think the funniest way to look at the character, not because atypical sexuality is funny but because he’s a funny character on a funny show, is similar to the original Smithers — the Dean is a Jeff-Winger-o-sexual first and foremost. Ultimately we learn that the Dean’s acceptance of the gay mantle has made him the one thing we all hate: a politician. It’s all mildly funny, but mostly because the Dean’s funny.

Though a little more one-note, I enjoyed Chang’s story much more as he tried out for the lead role in a stage production of The Karate Kid. The idea of a Karate Kid stage play may not be as ridiculous as, oh, say, a live musical version of A Streetcar Named Desire, but the writers get about as much out of the premise as possible. Annie’s over-acted portrayal of Daniel LaRusso is pretty funny, although not quite laugh out loud, and the abuses of director Matt Lundergard (played by perennial sitcom guest star Jason Mantzoukas) towards Chang at times recalled J.K. Simmons’ Terence Fletcher from Whiplash. Just like that character, Lundergard’s verbal abuse winds up being all in service of the potential he sees in Chang as the truly beaten-down actor necessary to bring his version of Mr. Miyagi to life. It’s a small victory for Chang, but I was genuinely cheering for him given what a ludicrously tragic character he’s become.

As for the Elroy-Abed story which saw the duo hunting down Greendale’s Wi-Fi problems only to find a bird’s nest with still-developing eggs? Pretty tacked on. We don’t really learn anything new about Elroy, Abed doesn’t get much to do, and the concept of Elroy and Abed guarding and preserving the bird sanctuary even at the great cost of no Wi-Fi didn’t really move the emotional needle. Really, if you think about it, that whole story could’ve been excised and the only repercussion would’ve been a running time closer to a normal network half hour. 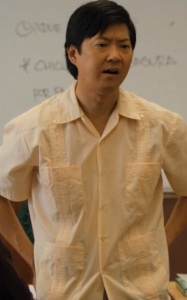 Don’t question Senor Chang, or you’ll get bit. Ya bit! Ya bit!

When it comes time for me to give a final, quantified, numerical verdict on an episode this late in Community’s run, I usually try to compare like with like, which means “Queer Studies and Advanced Waxing has to compete with episodes more like last week’s “Basic Crisis Room Decorum” rather than masterpieces like season two’s “Paradigms of Human Memory.”   From that measure, I got a lot of enjoyment out of this week’s episode. I’ve become attached enough to the Community world that even though the show isn’t as sharp and funny as it used to be, I can still appreciate it for its human elements. In a finer world, we might’ve seen a more spectacular scene with a dominant personality like Mantzoukas’ director going up against the considerably more formidable season one “El Tigre” Chang.  In this timeline, however, where a show like Community is barely hanging on, it’s good enough for me just to see Chang finally achieve even this minor level of success.