It is with perpetual background character Garrett’s declaration, “Ass… Crack… Bandit!” (and the accompanying screams), right at the beginning of this week’s episode that it instantly becomes clear why this is Dan Harmon’s show and only Dan Harmon’s show.   “Basic Intergluteal Numismatics” is a concept episode that elects to take on the muted colour palette, dramatic camera angles and serial pacing of a night-time investigative procedural (think Law & Order mixed with the fatalistic overtones of David Fincher’s Zodiac) as our heroes chase down the menace of that aforementioned bandit.  While it’s a tonal change that works well for the episode’s plot, it’s also a choice that perfectly illustrates the depth of Harmon’s understanding of this world.

Last season’s much-maligned Gas-Leak Year was showrun by producers David Guarascio and Moses Port, who, at that point, had most recently worked on ABC’s Happy Endings, one of the stronger sitcoms of the last few years (don’t worry, it’s cancelled now, so you can all go f*ck back off to your Two and a Half Men’s and Big Bang Theory’s and the monstrous thing Family Guy‘s become).  At its best, Happy Endings was wall-to-wall jokes, a manic expression of funny ideas only loosely tied together by characters with just enough to keep us interested, and it gave us great moments like this:

It wasn’t a deep show, but it was smart when it needed to be, meaningless when we wanted it to be, and entertaining when it had to be, and it’s a show that I miss more than I probably should.  Guarascio and Port were never able to translate that success to Community season four, but as Happy Endings evinced, it wasn’t entirely for lack of talent.  Community is just too Dan Harmon, too much a product of a singular vision, and as I watched “Basic Intergluteal Numismatics” unfold, I realized that Harmon isn’t necessarily that much smarter than Guarascio and Port (though he probably is a bit more clever), it’s just that when it comes to Community, he always knows the right choice to make and he’s usually the only one that knows it. 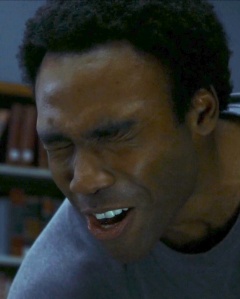 This episode introduces us to the Ass-Crack Bandit, a heretofore unrevealed threat that had, off and on, terrorized Greendale for the last couple of years… by dropping quarters down people’s ass cracks when they bend over.  It’s a pretty dumb idea when you come right to it, but the show is so committed to the concept that it’s hard not to get caught up in the fear just a little bit.  As the bandit assails victim after victim, the stakes rise (even though we’re still talking about quarters down exposed butt cracks), and the bandit’s identity is revealed, the episode draws laughs through sharp writing, a comfortable, knowing use of its characters, and effective undermining of procedural genre conventions.  Newcomers like Professor Hickey and the returning Professor Duncan fall into natural roles during the investigation, and the return of Starburns is well earned after an entire season’s absence.  Troy brings a particularly melodramatic reaction to his own ass-crack assault, with a perfectly rendered combination of facial discomfort and victimized scream.

It’s all pretty silly and out there, and I don’t know if your average viewer is going to pick up what “Basic Intergluteal Numismatics” is putting down, but it all works for long-term viewers.  <SPOILER ALERT> And then, rather than a gentle quarter drop, the episode punches you straight up the ass with the reveal that Pierce has died, a moment with more emotional impact and resonance than I thought it could have, one that makes me feel a little sad even now, hours after the show’s airing.  It’s a surprisingly affecting moment that wouldn’t have landed as hard in an episode that hadn’t taken the tone that it did.

The mystery of the Ass-Crack Bandit is never truly solved in this episode, but as we’re left with various concluding revelations in the final few minutes that point in multiple directions, we can all draw conclusions of our own.  I choose to believe that there was no Ass-Crack Bandit, and a bunch of different people have been dropping quarters down exposed ass cracks for years.  Because butts are funny.

-One of the Ass-Crack Bandit’s notes and his/her particular brand of cryptic:  “I hope you enjoyed my work again.  You can’t stop me, because what are you gonna do, not have butts?”

-Britta’s assessment of the bandit’s motives:  “We know that he hates money… or loves it.  Or doesn’t care about money and hates butts.  Or loves them.”

-Fat Neil’s call out to “Advanced Dungeons and Dragons”!