Images courtesy of The Weinstein Company and Macmillan

In the last few days before the Academy Awards — perhaps the most majestic, magical, pompous and circumstantial annual event of our times, a living monument of self-congratulations and extravagance — I managed to watch one more Best Picture nominee.  And it’s the quiet, British one.

With the possible exception of Nebraska, Philomena may be the least of this year’s Oscar nominees.  It’s one of the least talked about, one of the least mentioned, and it has one of the smallest stories.  There is no long con, no kidnapped ship captains, no artificial intelligences, or billions of dollars in stock fraud involved, and even in movie-obsessed circles, few will tell you that Philomena will win Best Picture.

And I’m not going to argue otherwise.

The Oscar and the Academy of Motion Picture Arts and Sciences it represents, is a strange, fickle mistress, and though it may be an honour just to be nominated, a win in any category is no more representative of genuine value than the biggest box office earnings awarded to what many regard as the worst movies of the year.   The entire practice of red carpets, designer dresses and jewellery worth more than most of us make in a year is an affront to the sensible, and the clubby, closed societies of actors and producers who deign to share their works with us while gnoshing on champagne dreams, caviar wishes, and gift bags with more than $25,000 in free merchandise and services is an almost Orwellian attack on meritocracy, freedom and openness.

Or whatever.  Sometimes it’s not worth thinking about these things too much.  Now here’s a movie review.

Inspired by the true life story and based on the book The Lost Child of Philomena Lee, Philomena is the story of journalist Martin Sixsmith (Steve Coogan) and Philomena Lee’s (Judi Dench) attempts to locate Philomena’s son, Anthony, lost fifty years earlier.  In 1951, Philomena had been sent to Sean Ross Abbey after becoming pregnant, and after giving birth, was forced to work in the convent’s laundry for four years to pay off the cost of her stay, allowed only infrequent access to her son.  Eventually, the Abbey adopted her son, along with the sons and daughters of several other women in similar circumstances, out to American parents, and Philomena kept her son and her transgression a secret from her family for fifty years, believing her suffering was the price of her actions.  Even though she had attempted to find him several times over the intervening years, the Abbey continued to tell her that they were unable to locate him.

To me, Catholicism, deep down, is about the dogged pursuit of positioning yourself somewhere that you can feel right in judging others.  Rational people will often ask themselves, “Who am I to judge?”, whereas Catholics assure themselves that, “Naturally, moral superiority is what allows me to judge, and judge harshly, the wicked actions of this fallen world.”  Now these are all broad and largely uninformed viewpoints built more on ignorance and, at best, superficial understandings of a belief system that brings comfort to millions, but there’s no denying that, both in my personal dealings and the popular fictions I’ve been exposed to, that Catholics don’t always come out looking good or right in any significant way.

Watching Philomena’s early days as a young girl, without a mother to teach her of biological conception and largely the victim, first of the man she slept with and then the church through which she served penance, it seems a special kind of hell that young Philomena had been born into.  At least as presented, Philomena really didn’t know any better.  Imagine being told that the child you gave birth to is a living symbol of your sins, that you must work slavishly in the pits to atone, and that your time with your son will be short, no more than occasional glimpses and visitations until the day he’ll be lost forever to a family in a far-away land.  That’s not a situation I would wish on my worst enemies (of which there are frighteningly several).

There’s a wide-eyed optimism to Philomena, old and young, one that seems ripe for the crushing in all of the times and settings we see her in, but it’s also a hopefulness that she never loses.  The story takes us from early 1950s Ireland to near-present-day Washington, D.C. as Martin uses his contacts to track Anthony.  The film pays careful attention to the type of woman Philomena is, and in many ways she’s the same wonderful, warm, baffling, and paradoxical woman many of us see in our most-favoured maternal figures.  At once a woman unaware of the intricacies of the world, as we see when she phones Martin (staying in a separate room of the hotel) to make sure that he also has a bathrobe and slippers (because she was given two in her room), Philomena is also possessed of a worldly perspective, aware of the value of life more than most.  Judi Dench puts in a measured performance, vulnerable but never weak, and the only cogent argument one could possibly make against another nomination for Best Actress is that she brings the same high level of craft, depth and emotional complexity to every role she’s ever in.  Why should this one be any different (even if she won’t win)?

Steve Coogan’s Martin is the counterpart to Philomena, world-weary having recently been sacked from his position as Labour Party adviser, and searching desperately for meaning in his life.  At first shuddering at the thought of writing a human-interest piece like that of Philomena’s search for her son, Martin is the obvious voice of reason, generally a non-believer and occasionally devout in his religious disbelief in the face of everything that happens in the story.  Importantly, however, though he and Philomena are occasionally at odds, the two are never adversarial.  It’s not a role calling for any major swings in action or temperament, but its full of the type of subtleties that call for someone an actor that actually knows what he’s doing.  A major star in other parts of the world, celebrity continues to escape Coogan in North America, making sporadic and largely forgotten appearances in major American productions (see:  Tropic Thunder, Night at the Museum).  For his sake, I hope this relative obscurity continues, because I would hate to see him have to miss roles like Martin Sixsmith in favour of more of this:

While tackling fairly serious subjects, including religious discord, sexual preference, and the evils that men do, Philomena is a fairly light movie.  It wouldn’t be incorrect to call it a comedy, though it would be severely limiting to view it through that lens.  What I can say is that I laughed watching Philomena more times than I ever laugh when I watch The Big Bang Theory (to help me go to sleep).  Ultimately, I think British humour can be worked down to the broad idea that one character will frame some action or belief as horribly unconscionable or massively undesirable and then the other character will immediately and without hesitation perform that action or have that belief without question.  And occasionally that action or belief will be understated (and no, you’re not supposed to laugh at that description).  There’s a wicked irony in a statement Martin makes early on in his belief in God:  “I don’t believe in God… and… I think he can tell.”  Later on, Philomena asks Martin if he believes in God and he responds with what a difficult question that is to answer before she immediately, and without question, reminds us that she does.  And it’s all comedy gold.  There’s this idea running around that you have to be paying attention to understand British comedy, and while that’s true, that shouldn’t mean that it’s hard to understand.  You JUST have to PAY ATTENTION. 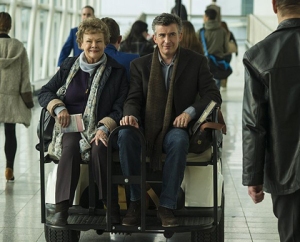 At its centre, Philomena feels like a film designed to tell you a story.  That might seem obvious, but it’s quality not always evident in a lot of the movies that see release.  There’s a moment, as Martin and Philomena are riding a cart through the airport where Philomena tells him the exact, specific contents of an entirely predictable novel she’d been reading before asking if he’d like to read it.  It’s these little moments, combined with the bigger, more dramatic scenes that let us know who these characters are, where Martin will note, as he looks at the back of the book, “Oh, there’s a series of them,” or Philomena will marvel at the incredulous hilarity of Big Momma’s House (on pay-per-view at their hotel in America).  The film doesn’t waste a minute to anything that isn’t essential to the story, and yet it never feels hurried, allowing viewers the room to fully absorb the story on display.

Eventually, Philomena builds to a dramatic boil as it’s revealed that the Abbey and its sisterhood knows more than it’s letting on, consciously and deliberately withholding information.  And even though Philomena never wavers and never gives in to her baser instincts through a film that’s shown us a naïve, innocent and overly trusting woman full of wisdom, grace, intregrity and understanding, it’s hard not to see the Abbey for its plainly wicked, vengeful and selfish actions.  Philomena holds steadfast to her beliefs, condoning the Abbey’s actions even as Martin states, “Well… I couldn’t forgive you.”  It’s a statement that will be echoed by many viewers, a near rage that I would feel against these sisters and their beliefs.

But then… who am I to judge?

-Seriously, they call it “maths” in Britain?

The Wolf of Wall Street review