So here we are. After this week’s “Vesuvius,” there are only four episodes left until How I Met Your Mother is over forever. I would say it’s a bittersweet parting, that it’s time this show wound down to a close, that the curtain dropped, that everyone got their happy ending. There’s just one problem:

Something is terribly, horribly wrong.

The episode opens ten years from now, with Ted and The Mother having dinner at the hotel where this season’s happenings are all taking place. It’s snowing outside, and Ted comments that this isn’t the worst storm he’s ever seen. He prepares to launch into three separate stories, but The Mother says that she’s heard all of them. It turns out that, at this point in their relationship, they’re an old married couple, and they’ve told all their stories.

One of these stories is on the morning of Barney and Robin’s wedding. Lily feels that Robin isn’t handling the seriousness of her wedding the way she should, as she’s playing indoor hockey with her younger sister and watching The Wedding Bride Too (even though at some point Ted asked them not to, for some unexplained reason) in her hockey jersey with a glass of scotch.

Lily sets out to change this by making Robin go through an overly sentimental scrapbook about her and Barney’s relationship. When that doesn’t work, she puts on her wedding dress and says she’s going to borrow Robin’s photographer to re-enact her and Marshall’s own pictures, as they didn’t turn out well six years ago. (That’s what happens when the groom gets frosted tips and then shaves his head.)

Throughout all of this, Robin doesn’t care. She doesn’t make a big deal, and she doesn’t get nervous, and she doesn’t have a freakout about the fact that she’s getting married in a few hours. Right up until the moment she goes to refill the ice, she’s cool as an Edmonton hockey rink in January. Until that moment, anyway, because that’s when her mom shows up, having overcome her fears and managed to come to the wedding after all.

Barney, on the other hand, is not coping well. He’s convinced the suit Tim Gunn made for him–special for the occasion–is just too uncomfortable and not quite right. He goes through literally the rest of the suits he owns and finds some reason to discard each one (usually because he banged somebody in it). Eventually he puts the Gunn suit back on, and though at first it looks baggy and ill-fitting, it looks great after he realizes that he’s happy to wear this suit for the rest of his life.

Of course it’s all a metaphor for the fact that he’s about to make a colossal commitment and he’s giving up a lifestyle he lived for so many years, but honestly, after all the character development Barney’s done in the last couple of seasons, it falls a bit flat. I don’t feel like Barney needs any of that anymore, and it’s a bit strange to suggest it when he hasn’t needed it for a long time. 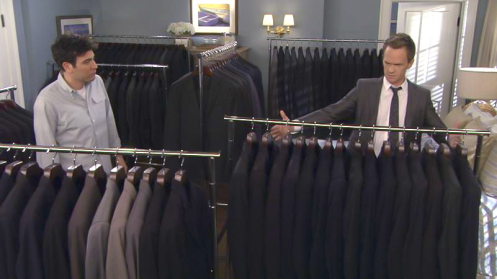 He still needs literally every single one of these suits, though.

Let’s talk something weird: the title of this episode. If we were looking at the conflict between Lily and Robin or the internal storm raging inside Barney, “Vesuvius” could be appropriate. Only thing is, the much-publicized fight between Lily and Robin was a minor tiff, and Barney’s problem is easily solved with the help of his best man. So let’s discuss the nature of Vesuvius for a second.

Before Vesuvius erupted, there was no word for “volcano.” (At least that’s what Doctor Who told me.) There was no warning, no indication of what was about to happen, because as far as the living world knew, nothing like this had ever happened before. It was an explosion, a disaster, a devastating blow to a developing world. In moments, Pompeii was buried, and people’s lives were wiped out of existence. There was no memory of them, no indication they had ever lived at all, until they were finally unearthed thousands of years later. At that point, we researched them extensively and told their story, ensuring they would never be forgotten.

In my experience, whatever happens in the middle, comedies usually have happy endings. There can be no real comedy without a touch of sadness, just as tragedy loses its impact when there isn’t any humour to temper it. How I Met Your Mother does a good job of balancing the two with small touches of sadness here and there to mimic the way the real world works. Life isn’t completely happy, but neither is it wholly sad (unless your life is a terrible place to be, in which case I’m sorry and here’s a funny video about sad cats to make your own life less sad).

At the moment, though, I’m increasingly suspecting that these last few episodes of How I Met Your Mother are going to punch me right in the heart and make me leak feelings out of my eyes. Ted’s statement about enjoying the moment and leaving the unbearable things unsaid; The Mother saying that Ted shouldn’t live in his stories but should move forward; her saying, “What kind of mother doesn’t come to her daughter’s wedding?” followed by Ted tearing up; even the song lyrics at the end of the episode that talk about remembering a woman: all of these things are bringing me to one awful, inescapable, stomach-clenching conclusion.

Ted is telling the kids the story of how he met their mother–his best friend, his soulmate, the woman he waited for for his entire adult life–because she died, and he wants them to remember her. He’s unearthing the story of them, reminding their children that she existed, and making sure she’ll never be forgotten.

Like an eruption of choking ash and boiling-hot magma that suddenly bursts out of the ground and leaves devastation behind it, something awful is coming. Right now we’re feeling the warning rumbles, but there’s not enough time to escape. I’m in this story for the long haul, and with only three episodes left, I’m very much afraid that this show, which has brought me so much joy in the past, and which I’ve been so, so invested in, is going to make me Vesuvius tears right out of my face.

I guess we’ll see in the episodes to come. But if they kill The Mother, who I’ve been in love with since the moment I saw her face, “sumb*tches” gonna pay.