When I was fifteen, my school put on a production of Les Miserables (which, as you know, is one of my favourite stories of all time). It was my first year in musical theatre, and I was absolutely psyched—until they cast me as, and I quote, “Whore #3.” Obviously it was exactly the sort of role that every girl dreams about getting, and I didn’t even go home crying about how my teachers obviously thought I was a tramp or anything.

END_OF_DOCUMENT_TOKEN_TO_BE_REPLACED

Remember when you’d talk to your high school guidance counselor?  He’d ask you what you would do if you had a million dollars, if you didn’t have to work.  And invariably whatever you’d say was supposed to be your career.  So, if you wanted to fix old cars you’re supposed to be an auto mechanic.

Hopefully the reason that sounds familiar to you is because you can pick out movie quotes pretty easily and not because it’s a reflection of your life.  It’s a cliche.  I never spoke to my high school guidance counselor; I’m not even sure if my high school had one.  Frankly, I don’t think I’ve ever had a serious conversation about what I wanted to do with anyone.  Careers are a tough thing to get a handle on.  When somebody asks you what you do, do you just tell them where you work?  What your title is?  What you actually do?  Or do you make something up that sounds a little more impressive?  Are you happy with where you’ve ended up?  Is it at all what you imagined?  Does it even vaguely resemble what you would do if you had a million dollars?

END_OF_DOCUMENT_TOKEN_TO_BE_REPLACED

Like you, Thom, I am an Anglophile. I love all things British, from their flag to their television programming to their remarkably civilized and emotionally understated mannerisms (they make tea in the middle of crises. How delightful). But perhaps one of the things I love best is their astonishingly photogenic royal family. Yes, I’m one of those people (but my practicality beats out my romanticism every time; for example, I watched Will and Kate’s wedding on YouTube like seven hours after it happened, because let’s be realistic here, they got married at like four in the morning my time and I like sleep more than I like them, no matter how adorable they are).

I’ve always had a fascination with royalty. Not in a “I want to wear a crown and have high tea every single day and make everyone call me a pretty princess” kind of way, but in a “how interesting these people are to study” kind of way. It seems so strange to me that, a long time ago, we chose people to be our leaders. And hundreds of years later, we exalted those people’s descendants to celebrity status, even if it occasionally ended in revolution and widespread destruction. Some people like the royals and some people don’t, and it’s become an increasingly common topic of conversation because of the aforementioned couple of Cambridge, whose engagement, marriage, and first child have completely dominated the media over the last few years.

END_OF_DOCUMENT_TOKEN_TO_BE_REPLACED

When I was growing up, I had a lot of friends.  Some good, some not so good, some who would eventually become bitter enemies.  But they all had ambitions.  They wanted to be somebody.  Some wanted to become policemen, some firemen, some wanted to work with computers.  One of them, even as a child, knew that he wanted to go into investment banking.  And even in my wavering, barely conscious understanding of who I was and who I was supposed to be, even I knew what I wanted to be when I grew up:

I wanted to be a Transformer.

I saw Transformers the Movie at just the right time for it to leave an indelible mark in the psyche of my older-on-the-inside young soul.  It’s a movie that I remember every part of almost word-for-word.  It had massive battles.  It had the hero’s journey in all of its reluctant-hero, supreme-ordeal, seizing-the-sword glory.  It even had undertones of romance as I’m sure there was something going on between the Autobots Springer and Arcee (the only canonical female Transformer that I’m aware of).

END_OF_DOCUMENT_TOKEN_TO_BE_REPLACED 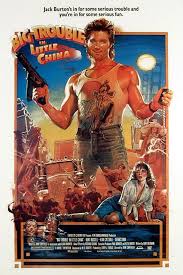 It’s hard to explain what it is that makes Big Trouble in Little China so great, mostly because said explanation would require a scene-for-scene description and re-enactment of the entire movie because it’s all amazing.  I guess it all comes down to Kurt Russell’s Jack Burton, who, for lack of a better term, is a “tour de force” (am I using that right?).

END_OF_DOCUMENT_TOKEN_TO_BE_REPLACED

Batman is a jerk!

That hallowed little missive, famously uttered by Kitty Pryde about Professor X during Chris Claremont’s classic X-Men run, rung through my ears as I read Batman:  Earth One.  A jerk and a moron.  What an idiot.  My favourite parts of Batman:  Earth One all involved Batman generally screwing up.  I laughed out loud twice within the first eight pages as I watched Batman misfire his batline and then miss his jump to the next rooftop as he chased after his target.  Geoff Johns’ initial Earth One story begs the classic question from Grant Morrison’s impenetrable Seven Soldiers series, “How do you know you’re a super-hero and not a crazy fetish person with a death wish?”  Of course all of this X-Men and Seven Soldiers talk means nothing to anyone not well versed in the comic world.  And, ostensibly, the Earth One books are all about appealing to people without such knowledge.

END_OF_DOCUMENT_TOKEN_TO_BE_REPLACED

How I Met Your Mother images courtesy of 20th Television

Man, friggin’ Ted. I may as well tell you right off the bat that this guy is a colossal douchecanoe.  He’s got some funny quirks and charms, but for the most part you just want to slap the guy.  So we’re going to skip past him and on to his friends.

Marshall and Lily are a single unit.  They are basically male and female forms of the same individual; no real-life couple could function this well or be this perfect for one another.  They can be nauseatingly adorable or surprisingly dirty, redefining what a couple can and should be.  Robin is a Canadian stereotype with Daddy issues and a love for handguns and fine cigars, and I want to be exactly like her when I grow up.  Barney is awesome (I’m serious; were you to ask him to describe himself, not only would you be a crazy person for asking a fictional character to speak to you, but he would talk back, and he would tell you that he is indeed awesome).

END_OF_DOCUMENT_TOKEN_TO_BE_REPLACED

Anyone who knows me can tell you: when someone asks me why I like something, I can only look at them in absolute confusion and say, “Because it’s awesome.”  I lack the words to explain myself, but for your sake, Thom, I will attempt to explain myself, since I’d rather you didn’t think that I told you to watch Firefly just to torture you.  Firefly is, quite simply, a show like no other.  It’s a space Western. It’s the story of nine people adrift in a universe fringed by black, devoid of the basic morals that governed Earth-that-was, but with a code of honour that you can’t help but identify with.  They struggle to get by, proving that no matter how technologically advanced humanity becomes, no matter how far out into the vast reaches of space we push, we will always struggle to find a place in the world, no matter how large it’s become.  I want you to watch this show because it spoke to me like no other show ever has.  It’s about the little guy.  In the pilot episode, people are chased by Feds, shot, and killed (though these three things don’t necessarily happen to the same person).  One character expresses skepticism about how this can be considered a win.  Another character replies, “We’re still flying, aren’t we?” It may not be much, but “it’s enough.”  It’s about survival.  After its untimely demise, the show still survives a decade later.  Time hasn’t worn away at it.  It’s a classic.  It’s brilliant writing.  It’s cold, hard truth-telling.  It’s real life… a few years down the line.  Enjoy the show.