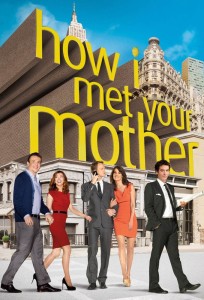 How I Met Your Mother images courtesy of 20th Television

Man, friggin’ Ted. I may as well tell you right off the bat that this guy is a colossal douchecanoe.  He’s got some funny quirks and charms, but for the most part you just want to slap the guy.  So we’re going to skip past him and on to his friends.

Marshall and Lily are a single unit.  They are basically male and female forms of the same individual; no real-life couple could function this well or be this perfect for one another.  They can be nauseatingly adorable or surprisingly dirty, redefining what a couple can and should be.  Robin is a Canadian stereotype with Daddy issues and a love for handguns and fine cigars, and I want to be exactly like her when I grow up.  Barney is awesome (I’m serious; were you to ask him to describe himself, not only would you be a crazy person for asking a fictional character to speak to you, but he would talk back, and he would tell you that he is indeed awesome).

The show is meant to be about Ted’s search for true love in the world’s greatest city, but I definitely don’t watch HIMYM for him.  I love the side stories, the ones about his friends.  We all have that friend we don’t like, who thinks the sun rises and sets with his life choices.  But we hang out with him anyway, whether because we owe him money or because we’re related to him or because we slept with him once and kinda want to see where things go.  And it’s our stories that are the interesting ones, not his, because we’re not so desperately fixated on finding true love that we forget how to live.  If it’s meant to happen, it’ll happen, and in Ted’s case, we know it will.  At the end of this season.  Maybe the next one.  I’m not sure.  If it goes too much longer, the conversation Old Ted has with his kids will eventually take an awkward turn, because they’ll be way too old.

So enjoy the show, because it’s pretty legit. (Except not Ted, ‘cause that guy’s a tool.)

Ted, Marshall, Lily, and Barney are living in New York and generally tearing it up.  But Marshall and Lily get engaged, prompting Ted to take a hard look at his life.  He sees Robin across a crowded bar (romantic, right? With the cigarette smoke and everything? Nice) and immediately knows she’s something special. And he’s right… except she isn’t the mother of his children, and he immediately screws it up for himself by telling her he loves her.  All of this paves the way for crazy romantic shenanigans for, like, eight years, in which time I probably would have given up on finding the love of my life, proving that Ted is just really freaking desperate.  But the shenanigans are pretty damn entertaining, as is the show’s breakout character, Barney Stinson.

How I Met Your Mother

Y’know that feeling you get, like a thousand knives of fire and brimstone are stabbing you right in two out of the four lobes of your brain?  I got that right now.

The first time I ever saw How I Met Your Mother (HIMYM), my instinct was to change the channel.  Immediately.  So I followed that instinct.  I can’t pinpoint when that first time was exactly, though it was definitely well after the show had started its run.  There was just something about it that I didn’t like.  The laugh tracks jump in too early and obnoxiously.  For some reason I’m turned off by the opening sequence.  And there’s just something about the sets that I don’t want to look at or feel a part of.  It’s really weird and HIMYM is one of the few shows that I just didn’t ever want to give a chance.  And then Grace made me review it.  I’m not sure if that sharp, stabbing pain in my head has anything to do with having just watched the first few episodes, but it’s hard to imagine the two are unrelated.

I’m a funny guy.  Y’know how I know that?  Because the things I’m thinking when I’m with a group of people are usually said by somebody else and then everybody laughs.  Sometimes, for whatever reason, you just hold back.  There’s a moment at the end of the pilot where Ted goes back to talking about how Robin, in fact, had not given Ted the signal and Barney says, “Yeah, Ted, we’re not on you anymore.”  And I get that, I totally get that.  There are elemental forces at work in any group situation that are hard to foresee or take control of.  A separation of self, no matter how well you relate to those around you, that never lets go — you know that there’s something singularly wrong with you and that nobody would ever understand or really be there for you.  Even though the rest of that scene carried on with Ted still basically as the central figure, it’s hard not to feel that there’s an element of the rest of the cast, even in this early stage, that is ready to move on from Ted’s weird need to get married.  He just needs to hold back a bit.

Obviously, at least at the show’s inception, Ted is the protagonist.  We start with him in voiceover in the future of 2030 and we transition to his internal and external romantic struggles of the present day of 2005.  Ted sees his friends getting engaged, worries about where he is in life, and resolves to find himself a long-term relationship.  And when he thinks he’s found the right one, he falls hard.  Too hard.  In a lot of ways, I feel like I’m Ted.  I think about where my friends are in their lives, I worry about my relationships, I can tell when romantic figures in my life don’t feel quite the same about me.  Most men act and project themselves as more Barney-type characters — predatory, unattached and unaffected.  But guys, let’s be honest… it hurts.  It hurts when she’s just not that into you.  It hurts a lot.  And if our Barney-style role models hadn’t told us and shown us that that’s the wrong way to feel, I’m sure we’d all be a little bit more open.  We’d all be a little more comfortable with the hearts-on-sleeves thing.  And that might even be healthier.  We men, perhaps, should all be a little less Barney and a lot more Ted.

There’s only one problem with that:  Ted is f*cking annoying. 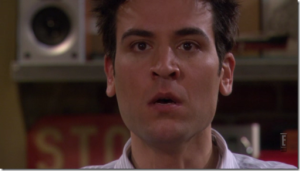 Yeah, I watched HIMYM, with Ted as the protagonist.  And I hate him.  I hate his little face.  I hate his guts.  And I hate the way he’s always pining.  Shut up, man.  Stop being the way you’re being.  Stop doing the things you’re doing.  I don’t know if it’s the construction of the character, the scripting, or the actor that plays him (who I’ve never seen before and will probably go out of my way to not see [nazi?] again), but Josh Radnor’s Ted Mosby is very, very annoying.  Kind of like Zach Braff’s Dr. Dorian would be if he wasn’t better fleshed out during the pilot or if Scrubs didn’t end up being such a good overall show.

I can understand where you’re coming from, Ted.  I know what you’re going through, Ted.  I can even feel what you’re feeling, Ted.  But don’t talk about it, at least not all the time.  It doesn’t matter if I feel empathy for a character if that character comes off as more pathetic and less sympathetic.

The entirety of the first two episodes revolve around Ted’s struggles to woo Cobie Smulders’ Robin who, we quickly find out, is not the mother.  Towards the beginning, I actually thought Ted did a decent job of introducing himself to Robin, and I can imagine why she would say yes to a date.  Though not overtly smart, it was at least clever for Ted to make the drink-in-face offer to Robin.  But after proclaiming his love for Robin after not even having completed one date, the alarmingly visceral backlash of Robin’s reaction pretty much ruins any chances of that relationship working out.  Ostensibly, Robin just isn’t looking for that much of a relationship right now, but I also think she can see how pathetic Ted is.  And if Robin could even contemplate being interested in Jon Bernthal’s Carlos (who you just know would be the type of guy you’ll eventually have to kill if you ever find yourself in a post-zombie-event-type world), it’s not hard to see how she’s not the one for Ted.  Because he’s pathetic.

Meanwhile, Alyson Hannigan’s Lily and Jason Segal’s Marshall have just become engaged and Neil Patrick Harris’ Barney is established as a socially comfortable individual if not the out-and-out womanizer that he, I gather, eventually becomes.  Based on the first few episodes at least, I would much rather spend time with these three than Ted or Robin.  They may not be the deepest, most well drawn characters at this point, but… at least they’re not pathetic.

So, having exposited all over the dramatic aspects of HIMYM, it is at this point that I’ll remind you all that HIMYM is a comedy.  And it’s very much a traditional sitcom.  While its construction as a retelling of the romantic labours of a fully grown man, kids and all, is more high-concept than most sitcoms, its execution is anything but atypical.  From the moment the show opens, multiple cameras are used, laugh tracks abound, and characters just wait around there for their lines to come up, just as scripted.  I don’t directly have a problem with traditionalistic, multi-camera sitcoms, but… I’m not sure how to finish that sentence.  I’m not claiming that my sensibilities are so avant-garde that I’m always right and the rest of the world is always wrong, I just didn’t like HIMYM.  I did laugh once though, at Barney’s “This just in” line.

On the other hand, I think HIMYM is very much a singular vision that manages to be surprisingly inclusive, and if you find yourself feeling comfortable inside of that vision, it’s very much a show you’ll find yourself invested in.  It’s got enough of the stuff necessary to attract a wide audience, and a cast that is at once attractive and affable, uniquely approachable and yet still just barely aspirational.  And that’s a pretty rare combination.

Ultimately, I just didn’t like HIMYM.  It’s not a blathering mess, it’s not blitheringly idiotic; it’s reasonably well conceived, and it’s not intolerably horrible.  It’s got an annoying lead, but the rest of the cast makes up for that.  I.  Just.  Didn’t.  Like.  It.  So while you’re all over there, watching season eight and what looks like it’ll be HIMYM’s final season, I’ll be over here lamenting NBC’s continuing dismissal of Community’s season four and what will, criminally, probably also be that show’s final season.

How I Met Your Mother final score:  4