Anyone who knows me can tell you: when someone asks me why I like something, I can only look at them in absolute confusion and say, “Because it’s awesome.”  I lack the words to explain myself, but for your sake, Thom, I will attempt to explain myself, since I’d rather you didn’t think that I told you to watch Firefly just to torture you.  Firefly is, quite simply, a show like no other.  It’s a space Western. It’s the story of nine people adrift in a universe fringed by black, devoid of the basic morals that governed Earth-that-was, but with a code of honour that you can’t help but identify with.  They struggle to get by, proving that no matter how technologically advanced humanity becomes, no matter how far out into the vast reaches of space we push, we will always struggle to find a place in the world, no matter how large it’s become.  I want you to watch this show because it spoke to me like no other show ever has.  It’s about the little guy.  In the pilot episode, people are chased by Feds, shot, and killed (though these three things don’t necessarily happen to the same person).  One character expresses skepticism about how this can be considered a win.  Another character replies, “We’re still flying, aren’t we?” It may not be much, but “it’s enough.”  It’s about survival.  After its untimely demise, the show still survives a decade later.  Time hasn’t worn away at it.  It’s a classic.  It’s brilliant writing.  It’s cold, hard truth-telling.  It’s real life… a few years down the line.  Enjoy the show.

The first episode, which for some reason wasn’t even the first to air, thus hammering the first nail into Firefly’s coffin, shows us a crew of six who’s stopped at a port to unload hot cargo and take on passengers.  Three men and a mysterious box come on board, as well as the unsaleable cargo.  And once that Pandora’s box is opened, a chain of events unfolds that isn’t resolved until the film Serenity.  Feds, Companions, Shepherds, Reavers… and that’s only the pilot.

Those who know me (and many more who don’t) will tell you that, despite the far-reaching accolades constantly being thrown his way, I don’t care for Joss Whedon.  I most certainly don’t hate the man or his work, but I really haven’t been as taken with him as everyone else. I find his dialogue often very unnatural, his characters and stories a little too gleefully insular, and his oeuvre generally overrated.  And if you read my Avengers review, you know that while I liked it, I, by definition of who and what I am, couldn’t possibly not like an Avengers movie.

So when Grace asked me to review the Firefly pilot episode, I went through a wide range of emotions.  First I was apprehensive, then anxious, then wary, then sleepy, then… kind of hungry, then worried, and then almost angry.  But then I realized that, just like learning to ride a bike, moving out of my parents’ house, marrying somebody I don’t really like, having horrible kids, and meeting a premature death at the hands of my second greatest enemy, watching Firefly is probably just one of those things I would eventually have to do.

Firefly was launched by Fox in 2002 in the days before the network decided to be more merciful in its wholesale execution of critically acclaimed but ratings-challenged shows.  Nowadays, many shows that seem to display a sustained fan-following despite low ratings are often at least given a chance for a final send off to give fans a sense of closure.  A great show like Fringe, for instance, was given a 13-episode final season, almost as a thank you to those who stuck by it.  But back in the bad old days of the early 2000s, a show like Firefly was not only cancelled prematurely, but butchered even before airing.  As originally broadcast, Firefly was shown almost comically out of order, interrupted by live events, and given very little chance to find an audience.

I’ve found there’s often an odd culture built around certain creators, actors, and intellectual properties.  An unidentifiable cache that builds and continues to build on itself unabated, constructing legends around creators like Whedon, actors like Nathan Fillion, and shows like Firefly.  It’s easy to see, but difficult to identify.  There’s just something in the air about these things that makes them essential viewing, bulletproof in the eyes of a certain audience.  Perpetually on lists of shows gone too early, this type of atmosphere surrounds Firefly more than any other show I’m aware of.  I can look back at shows that were cancelled too early — Better Off Ted and Freaks and Geeks spring immediately to mind — but few shows command the type of sustained, fevered attention that Firefly commands to this day.

All of this is a roundabout way of saying:  “I didn’t hate it.”  After watching the pilot, what I can say without a shadow of a doubt is that this is by far the finest thing I’ve ever seen from Joss Whedon. 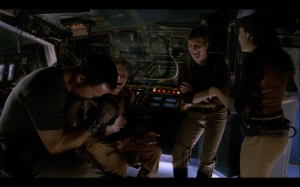 So, having started with the pilot episode, I can definitely say that it was a better entrance point for the series than “The Train Job”, the episode that originally aired first.  And when I really thought about it, I half-remembered watching “The Train Job” when it first aired and not particularly wanting to continue with the show.  But having watched “Serenity” (the episode, not the movie), I now get a reasonable sense of the characters, I can see where things are going, and I can see why I might want to watch it further.  I liked it.  It had a reasonably high level of action and intrigue, and fairly strong direction. I even laughed at Kaylee’s so-called death.

Now I’m not going to bore you with a scene-to-scene synopsis and commentary, so I’ll just list a few of the things that stood out to me from the episode:

One of the big things I thought about while I was watching “Serenity” is what makes this show a western.  Every time I heard the guitar twanging as we transitioned between scenes, looked at the way people were dressed, or listened to the way that people talked, it was sometimes hard to feel that the western motif was anything more than window dressing.  The general feel of a western is that of desolation — a hard life full of hard people, living in a hard world, where, despite the potential for a new frontier, people usually find themselves subjugated by the same sort of tyrannical systems they had hoped to escape.  And while I could certainly see these elements in the show, I was glad that Firefly seemed to be reaching beyond these obvious tropes to get to what westerns do best: exploring deeper elements of the human soul.  Captain Malcolm certainly seems to hold a bit of a grudge when it comes to the matters of divinity brought up by Shepherd Book, and that seems like it’s probably going to continue.  For my part, I certainly pray that it’s something explored well as the series progresses.

That’s right.  You can take “as the series progresses” as my declaration that I, Thom Yee, being of sound mind and body, will continue to watch Firefly, in all of its Whedon-ness.  And while I can’t give the pilot a ringing endorsement, I can at least say that watching Firefly was a decent way to spend an otherwise lonely Thursday night.