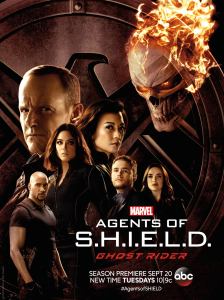 I’m going to be honest here… I fell asleep watching Agents of S.H.I.E.L.D. I did go back to review the parts I missed — I would never claim to know what I’m talking about if I hadn’t — but I thought it was important to tell you guys that up front.

So the first thing I have to say about “Uprising” is that I can’t believe I forgot to talk about Daisy’s goth look in last week’s Superhero Showdown. Seriously, not only is it tonally ridiculous, it represents a serious regression for the character, the once immature but promising hacker who grew into an effective field agent and Inhuman ambassador now acting out and dressing like she’s 14 years old. Bad news for everyone involved on that creative decision for the character. 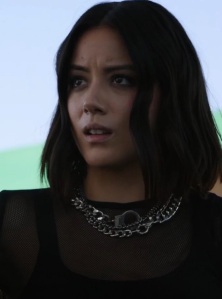 Bid my blood to run, Before I come undone, Save me from the nothing I’ve become

I mention that first because I didn’t think there was all that much worth noting from this past week’s episode. It was serviceable, sometimes funny, had good fight scenes, did an okay job of setting the stage for this year’s overarching seasonal menace (Bend it Like Beckham and/or the shadowy anti-Inhuman cabal she represents), and, in the end, was pretty much just a little adventure in which we get more time to spend with our favourite S.H.I.E.L.D. agents. That bit of adventuring was probably the best part of the episode, especially Fitz’s near-disgust over everybody’s lack of basic science knowledge. Oh, and Ghost Rider’s younger brother chased off Daisy or something, I didn’t really care because Ghost Rider (and Chris from Fear the Walking Dead didn’t help things either). By the way, until further notice I have every intention of referring to Parminder Nagra’s character as “Bend it Like Beckham”.

I do wonder why they gave May her haunted-after-ghost-touch storyline only to have it resolved so quickly, though that wondering is more than balanced out by the fact that I hated it and am glad to see it over with. I’m also having a tough time with Bend it Like Beckham’s anti-Inhuman agenda since it seems like nothing more than unyielding, hate-for-the-sake-of-hate prejudice at this point, but hopefully the writers have something up their sleeve with the character (at which point I’ll consider no longer calling her Bend it Like Beckham). Another minor negative, although it’s not this show’s fault, is that they never once mentioned Inhumans in Captain America: Civil War even though, as discussed in the episode, that movie’s superhuman registration has implications for the Inhumans as well. And am I the only one disheartened to see that the hellfire-powered GhostRidermobile still needs to be filled up with gas? 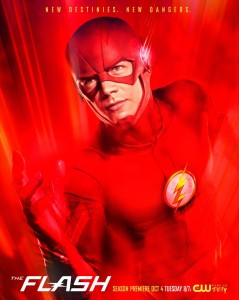 In last week’s Superhero Showdown, I posited the idea of Barry taking smaller steps over the course of the season to fix the timeline à la Quantum Leap (did we ever find out what he was actually trying to do in that show?). This week, in “Paradox”, they squashed that idea pretty quickly. Because Barry needs to learn how to be a man.

From all of the various fictions we’ve absorbed over the course of our lives, we all know that time travel has unpredictable consequences and wide-reaching implications (at least I assume your knowledge of that fact comes from fiction), but when Barry’s pulled out of the time stream by Jay Garrick (the real one) before he can complete his latest trip into the past, he learns a hard lesson on why time travel can’t fix all of your problems. Well, it’s a hard lesson in terms of it’s a-cup-is-never-as-strong-once-broken metaphor, but it’s an overall much softer lesson in that basically Jay tells him that real men don’t run away from their problems. That’s disappointing on several levels, first, because it avoids having to give a more cosmic answer to not messing with the timeline, second, because the Legends team (see below) screw with time travel all the time (it’s basically their job), and third (and most important), because it’s disheartening to see Barry never learning his lessons. That’s really the worst thing about this episode, and it might be the worst thing about the series as a whole. The writers just don’t seem to be able to get to a place where they can explain their universe’s rules or show their characters growing without making other characters look like idiots, and it’s always worst with Barry. I mean, he’s a crime scene investigator, but he never seems to know science, he’s been a superspeedster for two years but never has any of his own insights on how his powers work, and, as of last episode, he’s seen first hand why not to screw with time and he goes straight to doing it again anyway. He knows the potential consequences of time travel, that’s what the last episode and even the whole first season was about, but he does it anyway. 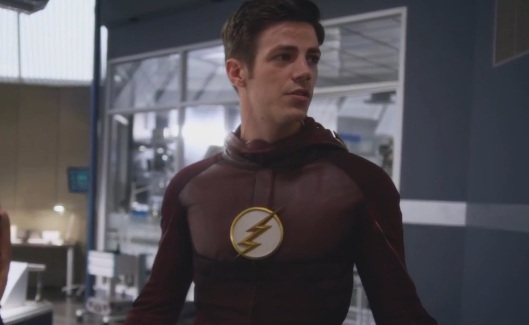 You’re lucky you got looks, Barry.

I still liked the episode though, quite a bit actually, and that’s even after acknowledging that Barry’s still an idiot and the episode’s major drama – everyone’s in a bad place because of Barry’s messing with time – was resolved entirely too easily. The great thing about “Paradox”, other than seeing the real Jay again (and here’s hoping they don’t run that character into the ground), is that it set up so much for the future of the series. Who is Dr. Alchemy? What’s with Draco Malfoy (and how could he possibly not be Dr. Alchemy?)? When will Wally be Kid Flash again? How did Caitlin get her Iceman Killer Frost powers (and will they automatically make her a bad guy?)? Are those husks going to continue to be important? I care about those things, I care about them a lot. Well, maybe not the husk thing, but good episode anyways.

Legends of Tomorrow — Out of Time

The first episode of Legends of Tomorrow’s second season began with a tour of the timeline and the relativistic impacts the Legends have had on the timeline vis-à-vis new character Hank Heywood, a self-described time detective, as he lays out all the reasons he thinks the Legends are in danger to mayor Oliver Queen. All of which bears the question, “When are they gonna get to the Justice Society [cries]?”

I almost always appreciate the in media res storytelling technique, and in “Out of Time” it’s used effectively to introduce us to our new “time detective”, but with the scope of this episode’s reintroduction, I can’t help but feel like the overall story was a little bit wasted. With each of our six remaining Legends scattered to different time periods (well, Stein + Jax = Firestorm was still together), following our heroes for even just a little bit longer in their individual adventures seems like it would have been in order, and the mystery of how they got there could have been a lot more compelling. At the very least, these stories looked a hell of a lot more interesting than last year’s two-part Ray and Kendra and Sara trapped in the ‘50s story arc.

Watching “Out of Time”, it’s pretty clear the showrunners are trying to hit the reset the table with the show, jettisoning the immortal menace of Vandal Savage, the eternal love of the Hawks, the Time Masters, and even Rip Hunter himself, and with this episode’s pace it’s also clear that it’s a reset they’re trying to finish as quickly as possible before moving in a different direction. We have yet to really see how Heywood will fit with the team, but I will say that even though I never really liked Rip, I will miss him for as long as he is missing, and if he doesn’t come back, I’ll be pretty disappointed that they dispensed with him so unceremoniously.

As for the story itself, there’s a plot line about Einstein and a nuclear bomb exploding in 1942 New York that didn’t seem very central to the story, and its inelegance in the overarching narrative of the episode is mirrored by most of the Legends’ interactions, particularly with Sara, who’s willing to abandon the group and its plans to try to save Laurel. Yeah, I get that she’s still torn up about the whole thing, yeah, I get that the idea to save her was rekindled when Damien Darkh shows up (i.e., kill Darkh in 1942, prevent Laurel’s death in 2016), but the team’s important too, they care about each other too, at least that much has been established by now, but here they still come off like raw rookies who can barely stand each other. The lack of believable character arcs is one of many things that held this show back last year, and if the writers haven’t learned that, then this show will continue to wander in the valley of mediocrity. Also, how’d Jax keep his phone charged back in medieval times? That dog won’t hunt, monisignor.

Sara: “I’ve been waiting a long time for this, Darhk, and, to be honest, I haven’t really prepared that well.”

Having not watched (and planning not to ever watch) Arrow, the menace of Damien Darhk was also a little lost on me, but I did metaphorically fist pump when Reverse Flash turned up as one of Darhk’s allies (I don’t think I’ve ever literally fist pumped), and I am genuinely excited to see their Legion of Doom once it’s fully formed. Even with the episode’s cliffhanger (of sorts) ending with the Justice Society showing up, it was the Reverse Flash’s brief cameo that was easily the highlight of the episode, and there’s two reasons for that. One, it was an unexpected and effective use of a character that hinted at future storylines, and two, I was looking for the Justice Society all episode! I didn’t want their role to also only be a cameo.

So, intrigue, excitement, brief greatness, some waste, and an ultimately maddening sense of disappointment? You’re damn right Legends of Tomorrow is back.

Legends of Tomorrow “Out of Time” episode score

There’s a maturity in Agents of S.H.I.E.L.D. that’s really missing from The Flash, in content and in character development, but there’s also a sincerity in The Flash that I would really like to see in Agents of S.H.I.E.L.D. Neither show has been really fulfilling this year, but in general I still favour The Flash’s clumsy, awkward character exposition over S.H.I.E.L.D.’s lack of essential feeling. And Legends of Tomorrow is still Legends of Tomorrow (i.e., probably don’t watch unless already a geek).

So for our second Superhero Showdown, The Flash still reigns supreme.  Next week sees the return of The Walking Dead, so exciting times here.  Exciting times.