At times like these, I’m reminded of an earlier moment in The Walking Dead, way back in season three when Rick and co. first discovered the prison and decided that one of the best people to send into the forbidding, unlit, pitch-black darkness of the prison interior corridors was Hershel, the only elderly person in the group and the only one with medical experience. And that’s how he lost his leg. Remember, this was back in the day when they still had pure cannon fodder like T-Dog around. And they had just found protective riot gear but should’ve kept their prison strike group smaller because they didn’t have enough gear to go around. And they definitely still needed Hershel if only because Lori was close to giving birth. But no, no, by all means, let’s send the doctors into danger, we don’t need them around (not to mention maybe having other people in your community learn about that type of valuable information).

So have we ever actually, y’know… met? I mean, do you, like, have a room in Alexandri— oh, someone got an arrow in the eye.

After raiding the Savior satellite compound, our heroes spend what could’ve been a restful, everyday episode instead getting themselves killed when Dr. Denise convinces Daryl and Rosita (Huh? Have these two ever been together before this episode?) to take her to a nearby apothecary where she hopes to find medicine (and a measure of courage when outside the walls) and Eugene takes Abraham to a nearby (within walking distance?) town’s industrial machining shop where he tells him he thinks he can use the space to make bullets. Then everything goes wrong. Maybe Rick and co. (or rather co. without Rick for most of this episode) have gotten cocky from all their recent wins, maybe they’re moving without fear now that they think they’ve wiped out Negan, but in any case, the two groups we followed this episode got sloppy and they paid the price.

“Twice as Far” is an episode about growing beyond your limits, of the greater Alexandria group in general, but specifically the limits of some of the less developed, less assertive, and more vulnerable characters in Dr. Denise and Eugene, but for an episode about growth and about getting over your own insecurities, it was very punishing in that the reward for Dr. Denise doing so was an arrow through the eye. Oh sure, she had her moment and a point to make to Daryl and Rosita, both receding into themselves for their own individual reasons, but it wasn’t the kind of point we really need for these characters at this point in the show and especially just before a major war with the Saviors. 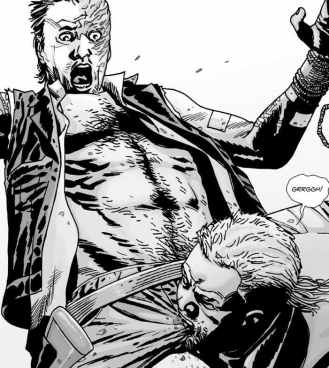 There were, however, still a few “Yes!” moments in the episode, including Eugene grabbing his moment to distract Dwight’s group, fresh from killing Alexandria’s only remaining medical practitioner, by doubling down on Dwight’s crotch, and especially when Dwight’s group retreats after a sound defeat and it’s like “YAS!!!!!! DARYL GOT HIS CROSSBOW BACK!!!!!!!!” In stark contrast to Denise’s fate, it wasn’t a bad episode for Eugene who may have finally gotten some agency after a very long period as dead weight. I’m also a big supporter of Morgan’s prison, both because he’s right, they need to be able to take some prisoners for reasons of intelligence gathering and negotiation (and maybe even mercy), and because it sets up a slightly more organic reason for the prison should things turn out the way they do in the comics with Alexandria’s war with the Saviors.

The big miss for me this episode is that after Dwight’s group gets the jump on Daryl and Rosita, they never reveal that they’re with Negan (as I’m sure they are), which could’ve been a big kick in the gut for our group to find out in this way that the Negan problem is much bigger than they thought. I can’t believe I still hadn’t put the Dwight we met back in “Always Accountable” together with the Dwight I know so well from the comicbooks, but if there was ever any doubt, those burn scars definitely make it clear who we’re dealing with now.

So it’s goodbye to Dr. Denise this episode, a major loss for the town and a minor loss for us viewers. She lived the way she died, having a point but not quite making it. As for the episode as a whole? To be honest, I kind of hated “Twice as Far”, but at least I cared enough to hate it rather than simply hated it out of boredom.

<< Last Episode: Not Tomorrow Yet
Next Episode: East >>