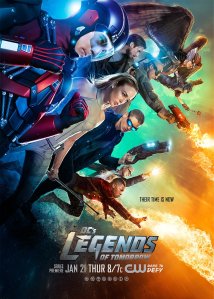 This week we pick up with our heroes still getting weird in the ‘70s, and once again we’re split up into three discrete groups as we try to solve the mystery of what Vandal Savage is doing with Hawkman’s deceased body. Forming new plans after failing to stop Savage during last week’s shenanigans, Rip and Sarah decide that if they can’t halt Savage’s plans, they can at least slow them down by hitting where it hurts (his wallet), Jax is charged with repairing the Waverider’s heretofore unrevealed secondary jump ship that was damaged during the team’s fight with Chronos and Leonard and Rory decide to take advantage by forcing Jax to use the ship to right a previous wrong, and Martin and Ray get into their own subatomic adventures in order to save Kendra’s life. By the way, I’m still trying to sort out whether to refer to these characters by their codenames or real names. I’m sticking to firsts for this recap, but in general I’m leaning towards first names for the Hawks, White Canary and Atom, Jax and Dr. Stein for Firestorm, and Cold and Heatwave for the rogues. 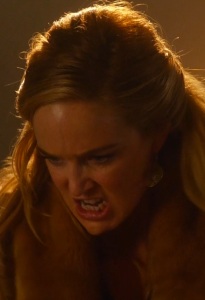 I can feel the bloodlust! The anger! I’m going into a berserker rage! I’m the … uh, White Canary!

Rip and Sarah take the lead in “Blood Ties” as we learn this isn’t Rip’s first rodeo with Vandal Savage, Rip having previously tried to kill the immortal villain back in 1700 B.C. When the two try to steal his money from the “the oldest bank in the world” (which, when you think about it, is a surprisingly banal approach to crippling the villain’s financial empire), they find the entire organization is a front for Savage and we finally get to see Sarah cut loose. Being the first to notice that each of the bank employees have the tell-tale signs of mercenary work, she quickly dispatches two of them and basically kicks everyone’s ass, and it’s pretty great, especially with how quickly she takes everyone out. It’s with “Blood Ties” that we finally go back to Sarah’s bloodlust being a plot thread, but it does feel a little at odds with the happy-go-lucky attitude we’ve seen from her in the preceding pilot episodes. In all the chaos, Rip gets some of his own hits in and, combined with seeing how he handled himself in his first encounter with Savage earlier in the episode, it’s obvious he has some training too, although I refuse to believe that the Rip we’ve seen so far is capable of taking on an immortal supervillain like Savage whose whole deal is being unbeatable from several lifetimes of experience. 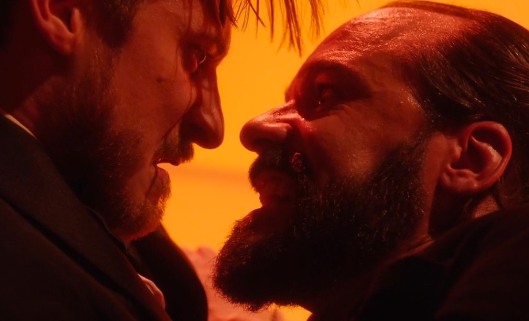 Savage:  “Stab away, I’m immortal!  Though it still hurts… and I should probably stop… just letting just anyone stab me… all willy-nilly!”

Later in the episode, when he faces Savage a second time, Rip once again gets the better of him in hand-to-hand combat, and it’s a little disappointing to see this immortal threat brought low so easily. I can accept that back when they first met in 1700 B.C., it was before Savage had his lifetimes of experience to draw on, but now that he’s been established as a villain who can reasonably fight a superspeedster, a Green-Arrow-level superhero and their sidekicks all at once, I just don’t see him being someone who can be beaten by a thin Englishman who doesn’t seem particularly tough. It was good to get a bit more of a sense of Savage and the scale of his operations in this episode, but with these beatdowns the villain is still far from being great, and I can’t help but feel that he would be a little more threatening if he was just played by a bigger, taller actor. Also, and here’s one of my biggest issues with the character, you’d think that being a time-travelling adventurer would’ve given Rip the causal werewithal to not reveal the names and an image of his wife and son so Savage knows who to look for and kill later in his life. That’s borderline Peter Griffin giving him his son’s picture with his school schedule and a list of his fears on the back. 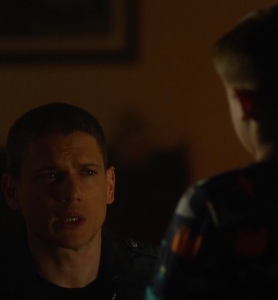 Leonard: “Always look out for yourself, Leo, or you might be tricked into going back in time and meeting your younger self in 1975 like is happening right now. Oh no, I’ve said too much!”

In our B story, Leonard tries to prevent some of his own tragic past when he pre-emptively steals a rare jewel to give to his 1975-era father rather than have the senior Snart be arrested and sentenced to five years in prison for its attempted theft, and we’re further reminded that time tries to stay on the same course when his father is arrested and given the same five-year sentence for trying to sell the jewel later anyways. That Leonard cares enough and was affected enough by some of the negative aspects of his past is revealing as he’s typically more of a tough, sh*t-happens type, and it’s genuinely funny and so true to his character when he answers Jax questioning their screwing with history with “Yeah, well history screwed with me first.” The whole setup is a little screwy in and of itself, though, as it seems like Jax would never have taken Leonard and Rory to steal the jewel in the first place, but, as with these Berlanti-verse shows, that’s just another case where we need to approach it with a heavy dose of the “whatevs”.

There’s also a C story about Martin and Ray saving Kendra’s life by travelling into her bloodstream at Atom-size, but other than further establishing the duo’s backstory from back in their teacher-student school days, it’s not a story beat that works that great. Though it afforded Martin the chance to give Ray some confidence and reassurance, it’s never really that clear why he lost it in the first place as Ray suffers little more than a minor setback before seemingly giving up almost entirely, and, along with the quasi-mystical stuff with Kendra babbling about Carter’s body’s location when we learn that Savage and his group can drink his blood to extend their own lives, the whole thing doesn’t really work past the point of yet another plot point we simply have to accept and move forward.

We’re still very early in the series and if this is its level, I’m going to be pretty good with the show overall, but still wishing for just that bit more. Hearing about what’s coming down the pipeline, Legends of Tomorrow’s greatest asset is that it’s willing to tackle some very particular nerd territory with upcoming storylines with the likes of a one-armed Green Arrow and his son Connor Hawke coming up. In that vein it’s still a series that I feel unbelievably fortunate to watch, but it’s also not hard to see how it could easily be just that bit better if the writers were just a little bit more careful. 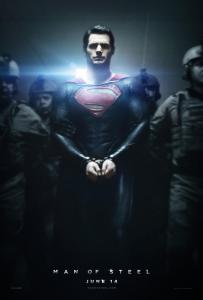