Between the Jon Snow Game of Thrones season six poster that debuted today and last night’s Walking Dead episode, what is this, the season of people not being dead? I mean, who else is gonna turn out to not be dead, Ned Stark? Derek Shepherd? Omar from The Wire?

So hands up, who’s surprised Glenn’s not dead? No one? No hands up? That’s what I thought. We were all hit pretty hard by Glenn’s seeming demise towards the end of “Thank You”, the third episode of this season, though there was a fair amount of skepticism about his death even back then, but the way not knowing what happened to Glenn has been strung out over the last four weeks made it increasingly clear to most of us that he wasn’t dead. I’m okay with that, you’re okay with that, most of us are probably even happy about that, I think we’re just not so sure about the execution. I mean, what was their end game with having Glenn turn out to have been just hiding out underneath that dumpster until the coast was clear, the guts that we all saw ripped apart having belonged to Nicholas, and everything turning out the way we all had immediately thought it would when we were thinking about ways Glenn could still be alive? If anything, this stunt death precludes the possibility of a more as-seen-in-the-comicbook death for the character sometime later in the season, and it may guarantee that that horrible fate instead befalls another of our beloved characters.

Other than that, “Heads Up” was a fairly calm series of vignettes and one-off, catch up moments where the most significant event was probably Carol’s discovery of what Morgan’s got going on with that Wolf in the camp. Having already confronted Morgan alongside Rick and Michonne for his unwillingness to kill earlier in the episode, this is a turn of events that’ll be sure to raise tensions in the group, but hopefully it’ll be in a way that lets both Carol and Morgan stick around for at least a bit longer. I really never noticed until now how preachy Morgan’s “All life is precious” mantra can be just because Morgan sells it so well (it also helps that it’s been coming from a character we know has been through a lot), but I did appreciate seeing that it’s still a line that’s hard for Morgan to believe in sometimes and something with which he’s constantly struggling. 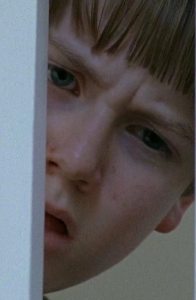 For the first time, I didn’t hate Father Gabriel when I saw his resolve in putting his prayer signs back up after Rick tore them down, because it finally shows the character in a virtuous light and finally trying to help (I think). He’s found purpose after recognizing that the Alexandrians are looking for guidance and comfort in these trying, I-don’t-want-to-be-bit-by-a-zombie times. I also didn’t hate Tara, who gave Rick the middle finger that I’m sure we’ve all been thinking about giving him at least once since we got to the increasingly less Safe-Zone. In this episode, Ron is probably going to be the character we hate most, and as soon as I saw that Rick was going to let him walk around with that ammo-less gun, I clearly remember thinking, “that f*cking little prick is gonna find himself some bullets.” Meanwhile his puny little brother Sam takes the cake for least manly as he’s still hiding upstairs, and I think the thing his scenes with Carol this episode most effectively illustrate is how perilous it is for shows like these to have to rely on kid actors to convey complex emotions.

The most action-heavy scene goes to the bozo move Spencer tried to pull with his grappling hook crawl, and it’s actually a scene straight from the comic, including that comment about losing his shoe, though they had a better reason for trying it in the book. Right now we’re actually in a point right before a lot of crucial moments from the comicbook, and that’s what “Heads Up” most reminded me of. If even half of those things come to fruition, there are a whole bunch of major, sudden, possibly horrible and graphic changes just around the corner, and frankly I hope at least half of those things do happen. After an unexpectedly, unrealistically, shockingly strong opening, the last few episodes have been more than a bit of a drag, and I think for all of us (I’ve been doing a lot of thinking for all of us in this review) the walls couldn’t have come down soon enough. 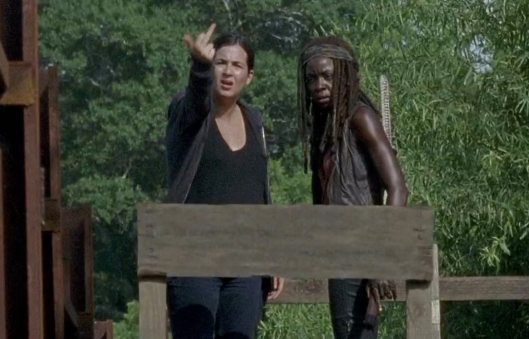 While all the while, Tara’s flashing her middle finger, going “do-do-do-do-doo, do—