You may think about homelessness on occasion, but, by and large, it’s not typically one of those things we usually consider on a regular basis. In a country like ours, Canada, most of us have the luxury of thinking about homelessness as a hypothetical rather than living it as a reality, contemplating it mostly at certain specific times of the year that encourage charity and caring for your fellow man [like now], but that doesn’t mean it just goes away or stops being a problem when you’re no longer paying attention to it. An extensive 2013 study from the Canadian Homelessness Research Network shows that at least 200,000 Canadians experience homelessness in a year, and at least 30,000 Canadians are homeless on any given night.

I’m not trying to tell you that we should all think more about the homeless or that whatever we’re doing to help isn’t enough. Those things are true, and unfortunately they probably always will be, but thinking that way and continuing down that path so often leads to self-defeat. At times we all feel alone, nothing more than momentary specks within an indifferent universe (to borrow a phrase from one of this year’s bigger but more thoughtful movies), and those are feelings that tend to harden us and cause us to think primarily of ourselves. And that’s easy, it’s even common, it’s the place from which our seemingly endless ability to be cruel to one another comes from. But that’s not all there is to us. On the surface, a number like 30,000 homeless people a night is just a number, a statistic, but the second you frame those numbers in more personal terms, the moment you’re told that there are approximately 2,300 homeless in our own back yard here in Edmonton and then you’re reminded of the extreme cold warnings we’ve been getting almost every night for the past two weeks, those numbers suddenly have more meaning. That ability to understand almost instantly, if only from the addition of a more personal note, that’s an example of our inexhaustible capacity for empathy. That’s human. That’s life. That’s where a film like Theater of Life comes from.

In 2015, Massimo Bottura, the world-renowned, award-winning chef of Osteria Francescana, gathered 60 of his fellow chefs from around the world to build the soup kitchen, Refettorio Ambrosiano, where they converted food that was going to be thrown out into gourmet meals for the homeless in Milan, Italy. Theatre of Life follows Massimo’s journey in building a sustainable space to feed the homeless as well as the struggles the homeless of Italy face in their quest to find independence.

One of the more interesting aspects of Chef Massimo’s efforts in building the Refettorio Ambrosiano is that it was built out of a specific event, Expo Milano 2015 and was inspired at least in part by the waste inherent even in an event where the theme was “Feeding the Planet, Energy for Life”. Obviously no one sets out with the ideal of wasting food or resources, it’s just that waste tends to be a natural consequence of the way we do things. After all, you don’t go to the grocery store and buy the most beaten-up, closest-to-expiring foods, you buy what looks freshest and newest, and as much as that only makes sense in the hunter-gatherer sides of our brains, it’s also one of the first steps towards food waste if only because people don’t buy bruised apples when unblemished ones are right beside them and partially spilled cartons of milk are no longer a complete, saleable units. 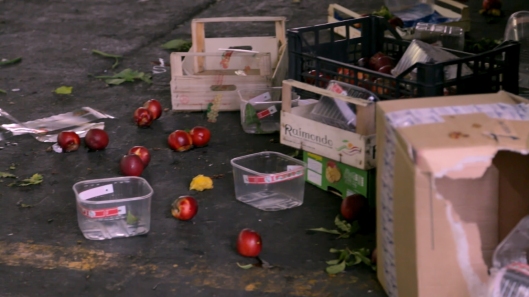 Food to be discarded at Expo Milano 2015

Chef Massimo not only built the Refettorio with the help of some of the greatest chefs in the world, but he built it with a robust model, with a modern design by Milano’s Politecnico, and with the support of Caritas Ambrosiano, the charitable arm of the Church in Milan. Though born out of the left over food stuffs of the 2015 Expo, all of the stakeholders in the Refettorio were dedicated to making sure it would last beyond the Expo, and today it’s an effort that’s even expanded to other parts of the world.

There’s an extent to which an explanation of what you’ll find in Theater of Life, no matter how broad, would serve more as an over-explanation than a basic overview. If you’ve read the preceding synopsis above or simply watched the embedded trailer, you have a good idea of what this documentary is about, the type of material it will cover, and probably even the flavour it will leave in your mouth as you contemplate its message. Instead, what I’ll point out to you about Theater of Life is that, while it is a movie with a message, it never feels preachy or overwrought. It’s an honest and truthful reflection of the situation of food waste and the situation of the homeless, but it has broader implications for even the most well off and meaning for anyone who’s ever thought about how hard it must be to not have a place to call home. It explores homelessness as a literal state of being and as a psychological space that’s not that different from the things that affect all of us — the need for a sense of self and belonging — and it never once claims that providing a plate of food is the answer for all problems, no matter how immaculately prepared that plate may be. 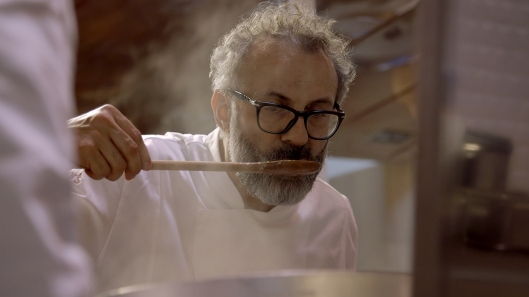 In fact, there are moments in the film where there’s a very real and very palpable divide between what sometimes feels like the high-minded ideals of the chefs making food for the homeless and the realities of what the homeless people in the film are facing, and it’s the type of unflinching look at the whole of what’s going on in this little ecosystem at the Refettorio that reminds you that this isn’t a movie with a narrative to follow but a real documentary that has ideas to spread but not an agenda to advocate. If there’s a hero in the film, I don’t feel it’s the chefs, the Vatican, or any of the financial backers, it would have to be Giorgio Papetti, a former homeless man who now works at the Refettorio as well as with other charitable organizations. He doesn’t do anything extraordinary in the strictest sense of the word, but he works directly with the homeless in the film and is able to speak more directly with them than many of the chefs that come into the kitchen, some of whom fully admit they don’t know what to say to these people.

Beyond any of Theater of Life’s deeper meanings, there are also elements that will appeal to foodies as we get to meet some of the most well-respected chefs in the world, including one of the world’s biggest celebrity chefs in one brief encounter (you’ll have to see it to find out who), and, as someone who’s always enjoyed watching cooking shows, it’s interesting to watch these professionals working at this high a level with such simple ingredients.

If you’re heading out to see Rogue One or Doctor Strange, I’m not going to tell you you should see Theater of Life instead. They’re clearly not the same thing and it would be disingenuous of me to suggest you’ll have a similar experience at any of the three of them, but I would point out that the former two movies will still be there later (and have already earned hundreds of millions of dollars for their parent companies) while Theater of Life will only have a limited, four-day engagement on the 23rd, 26th, 27th, and 28th of December at Metro Cinema. Theater of Life is, instead, a good and sobering look at and reminder of the plight of some of the less fortunate in the world, and it feels an especially appropriate movie to see after the Christmas dinners many of us will have and the left-over food from those dinners we sometimes throw out simply because we forgot they were in the back of the fridge. Or they’re yams. Honestly, I will never understand why people would willingly add yams to a meal. You have my permission to throw those out.