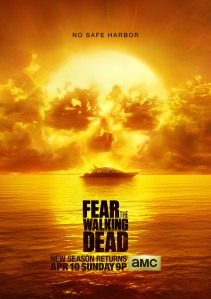 Jon Snow lives!!! Also, there was another episode of Fear the Walking Dead…!

“Blood in the Streets” actually starts off with a pretty good hook as Nick made his way to shore, swimming under cover of darkness to the Mexican border, still guarded by border patrol helicopters, presumably now more concerned with the infected than illegal immigrants. We soon find that he’s been sent on a mission from Strand to pick up Luis, a fixer of sorts who’s in league with Strand, and on the way Nick purposefully covers himself in zombie guts so that he can move uninterrupted towards his goal. It’s kind of jarring seeing Nick (or any one of our Fear cast members) on a very specific, mission-focused course of action, and it reinforced my [relative] love of Nick, who’s turned out to be surprisingly good at everything in this world. After calmly killing a zombie, he makes his way to the private estate where Luis could be found, quickly convinces the initially sceptical Luis that he was sent by Strand, has a conversation with Luis on how Strand will get the entire family into Mexico that’s pointed but not adversarial, and his actions lead directly to saving the Madison/Clark/Salazar family still on the boat, all of whom had no idea where he had gone. That’s all good work. 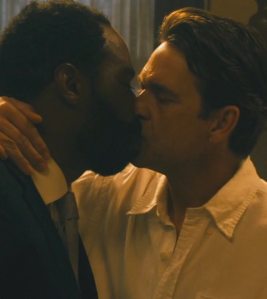 The kiss seen round the world! Wait, no, everybody was watching Game of Thrones.

Through flashbacks in the episode, we learn just about everything there is to know about Strand, chiefly that his father was a strip mall preacher and his mother abandoned them, he made his fortune through real estate and borrowed née stolen assets, and his business dealings led to a romantic relationship with Thomas Abigail. With the way Strand’s sexuality was played in the episode, it feels like the moment he kissed Thomas was supposed to be the denouement of the flashbacks, and though it might have been in a different era, it kind of lands with a thud here, and rather than being a revelation, it was a further reminder that nothing about Strand’s backstory was all that surprising or illuminating. It filled in holes, but it was nothing more (and possibly far less) than most of us had imagined of Strand, and given that the present-day parts of the episode literally threw Strand into the water, abandoning his crew until someone rescued him, the whole flashback story structure lacked the dynamism of a typical episode of the television king of flashbacks, Lost, which usually managed to combine its flashbacks with present-day actions so that the two stories added up to something together. Unfortunately, no such artistry can be found here.

Back on the boat, two unidentified men and a pregnant woman apparently in need of medical attention board and quickly take over, all in league with Connor, possibly the first major villain of Fear the Walking Dead. It turns out one of the two men, Jack, was the one with whom Alicia had been talking to on the radio, and… y’know, I really didn’t care about the rest of the episode. Learning about Connor’s group, seemingly a band of modern-day pirates who take whatever resources they can by gunpoint, was instructive, but Connor himself was underwhelming, arriving without pomp or circumstance before taking Alicia and Travis to their lair, and no one from this group seems capable to growing into a big bad. At this point, it’s up in the air whether or not a big bad would even fit the tone of the show. 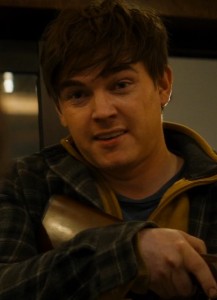 Next time you have the chance to kill someone, Chris, don’t hesitate.

I really wouldn’t have minded staying with Nick and Luis all episode, both of whom are, in the short time we spend with them, laid back and realistic about their situation and seem more concerned with solving their problems than stewing in overwrought emotional turmoil. Their story might not have amounted to anything thematically resonant, but it would have at least been more entertaining than what we got. When the two show up towards the end of the episode and quickly dispatch the two armed guards Connor left behind on the Abigail, it’s the saving grace the family needed, and considering it was a rescue Luis performed at the end of a sniper rifle, it (along with Luis’s Anton-Chigurh-esque haircut) tells you everything you need to know about the mysterious newcomer through action rather than the comparative inaction that’s come to define the show.

Fear the Walking Dead — “Blood in the Streets” final score