At the end of last week’s episode, we learned that the Time Masters had intensified their hunt, sending the mysterious (and non-creatively named) Hunters to find our legends after Chronos (nee Heatwave) had failed to capture them, a development that prompted many of us to think to ourselves, “Huh? Oh yeah, the Time Masters. Those are the guys who are chasing our guys, right?” To say that Legends of Tomorrow has lacked urgency in its first ten episodes would be an understatement, and for most of this week’s episode, that’s very much a trend that’s continued. Like “Left Behind” a few weeks ago, “The Magnificent Eight” is a Legends story that you really just have to accept at face value as a story that just wants our heroes playing dress up in the Old West regardless of what else is going on. And what a face we meet in this episode! I gotta admit, I’ve never been into western comics, and I’ve never had any feelings about Jonah Hex, so seeing him show up here to help our legends didn’t do a whole lot for me. By the time we got to the end of “The Magnificent Eight”, well, that feeling definitely hadn’t changed. 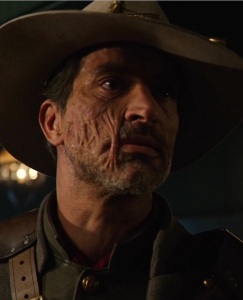 Hex: “Good thing I have these horrible burn scars or else there wouldn’t be anything remarkable about me.”

With our heroes hiding out from the Hunters in a time period the Time Masters can’t see into (?), we get some (still) much needed back story for our good Captain Rip, learning that a former mission saw him spending significant time back in the Old West, teamed with the aforementioned Hex well before he assembled the legends and even before his secret marriage to former Time Master trainee, Miranda. Intoxicated by the era’s many heroic opportunities for a guy with future tech, he nevertheless left only a day before catastrophe struck the town he guarded, and what’s more, he knew this catastrophic event that destroyed the town was coming and chose to maintain the integrity of the timeline instead of saving the day. It’s actually a really good development for the character, though it’s another case of tell don’t show that keeps us, as usual, at a bit of an arm’s length when it comes to really feeling this show.

There are two key time travel concepts that come to the forefront in this episode, 1) the butterfly effect, that sees minor changes having major effects later on, and 2) that time (or whatever unknown force) tends to want certain things to happen regardless of intervention. These are hoary old tropes in the broader lore of time travel fiction, and it’s funny how counter they are to each other, particularly when you consider Dr. Stein’s story in this episode as he chooses to save the life of a young boy he meets during the course of the episode only for that young boy to be famous science fiction (and time travel) novelist H.G. Wells. That’s all well and good and the type of fun but not especially meaningful wrinkle Legends likes to play with, but what if that boy had grown up to become something else? As is, “The Magnificent Eight” suggests that Stein’s intervention was meant to happen and was always supposed to happen (à la the 2nd time travel concept), but what if that boy had grown up to be the Old West’s Hitler (à la the first)? Basically, all this story shows is that, unless you have access to advanced time travel equipment (or have been making up your own rules this entire time), it’s all up in the air and you rarely know what’s the right thing to do when it comes to timelines. 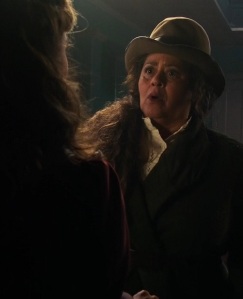 Old Kendra: “So you’re telling me that one day I’ll end up being a barista?”

The only other major story this week was that of Kendra’s, wherein she meets a mysterious woman who turns out to be one of her former selves, one who, like herself, lost Carter (in this case Old West gunfighter Hannibal Hawkes) well before her own demise, and she learns that, apropos to her relationship with Ray, every love she’s experienced other than with Carter has ended in tragedy. Looking at things this way (and in contrast to the romanticism of their fated to find and love each other throughout time backstory), Kendra’s eternal relationship with Carter could almost be more of a curse, but like everything to do with fate, I would think the resolution of this news would fall somewhere in the line of if it’s real love, it’s worth pursuing no matter what is supposed to be. Weirdly, Kendra’s story also implied that finding her former self may be key in her quest to find Carter, something that, to this point, didn’t to be something she was trying to do.

The rest of the episode is a pretty straightforward Ray becomes the sheriff story after passing off the local bad guy, with Jonah Hex his confidante and the rest of the legends his deputies, though it was a little aggravating to see the legends, once again, eschew using their powers to avoid disrupting the natural course of events. It’s somewhat understandable, but if you consider the scope of our heroes’ powers, someone like Ray is uniquely and perfectly suited to use his powers to fight bad guys without being seen. Still, despite how off the grid this episode was in moving our overarching story forward, I found it a surprisingly necessary story in that it allowed our heroes to spend at least a little bit of time outside of their own asses. Of course, the Kendra-Carter-doomed-love sidestory shoved us right back up there, so it was only so successful in that regard. As potentially interesting as that eternal story could be, the combination of how it’s been executed so far and the actress’s inability thus far to add any real pathos to it makes me really wish they’d leave it alone for awhile, particularly with how little time our heroes have spent seriously on the trail of Vandal Savage. Just let Kendra be someone, maybe even someone cool, instead of a constant plot piece. 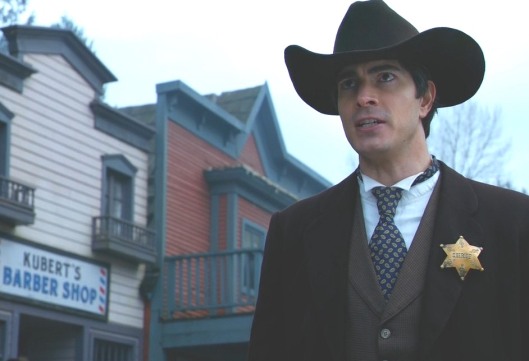 The resolution of the episode, as is vocally mentioned in the episode itself, was very easy, even after a few of the Hunters showed up to face the legends, and considering how big a guest star someone like Jonah Hex could have been, it’s disappointing to see the character be so passive throughout the entire episode. We did, however, get yet another interesting bad guy addition to the show with the Time Masters’ assassin, the Pilgrim, debuting as a villain who will be menacing our heroes by killing their past selves. Though this seems like yet another case where time travel rules that sound made up may have to come into play, at least one thing about the Pilgrim assassinations makes sense with what’s been established. We still know (though it might bear reminding) that our heroes aren’t important to the timeline, so it makes sense that the Pilgrim could go after their younger selves and not screw anything up too bad. It’s also an approach we have yet to see for this show, one that’s hard to discount once mentioned, so that’s refreshing.