So things look bad right now for Rick and co.  Sasha’s got some kind of survivor’s guilt going on.  No matter who Deanna believes, Glenn or Nicholas, her son’s still dead and she’s not okay with to that.  And Rick, well Rick really could’ve handled his whole side of things a lot more diplomatically.

The big news this week is that everything’s falling apart. After four episodes of building Alexandria up as the safe zone our heroes need, yet another of our group has died, and Rick’s carnal desires may cost them everything. We finally get the confrontation we’ve been waiting all of two to three episodes for (even though it feels like forever) and Rick takes it to Pete in a way that’s actually pretty disappointing. I guess Pete’s a pretty big guy, but I really thought Rick wasn’t going to have a problem with him in a fight, and even though the battle that followed had its own kind of ferocity, it lacked the sheer visceral thrill of seeing Rick machete a guy to death ‘cause he didn’t want to waste the bullets (which also happened this season even though that also feels like forever ago).

“I know you and I have had our problems, Pete, but you’re still going to give my kids that checkup we talked about, right?”

Seeing the newly appointed lawman covered in blood, vocally reprimanding the town leader and swinging his gun around at everyone seems like the kind of abyssal plunge that Rick may never come back from, but there’s still the potential for understanding throughout the community depending on how many people knew or suspected that Jessie was being beaten by Pete. Certainly the way that Pete almost always seemed to be stumbling around drunk should’ve thrown up some warning signs, and there may have already been a big enough contingent within the community that was simply wondering how long it would be until somebody had to do something with Pete.

While Rick’s public fall forms the majority of this week’s events for its dramatic enormity alone, it’s really the events of last episode — Aiden’s death — that have put everybody on edge, a fact beautifully illustrated when Carol’s apology casserole is rebuffed and her note burned at candlelight by Deanna’s family (though the burning note felt overly melodramatic). Nicholas has his story (a.k.a. lies) and Glenn has his (a.k.a. the truth), and Rick and co. are caught in the middle. I really hope we finally get to see some of Deanna’s supposed good judgment next episode when she handles things in a level-headed manner, but I also never got a good vibe from her, both from the actress’s portrayal and the fact that both of her sons seem like dicks. We’ll have to see how things go with her family’s story, but doesn’t her second son seem redundant so far? Unless the point is to amplify the dickishness? 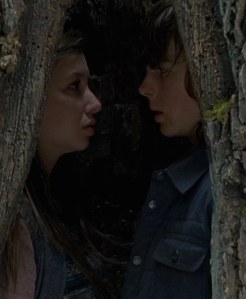 Unlike his father, Carl seems to be having more luck with the ladies as he’s spending more and more time with the mysterious Enid (whose name alone sounds like a lie). Of all the kids in Alexandria, Carl and Enid have spent the most time outside the safe zone, and that fact combined with adolescent curiosity is fueling what would normally be an almost instantly tiring storyline. Right now we have to ask ourselves, “Is Carl the luckiest boy in the zombie apocalypse?” or “Is Enid hiding a dark secret that could destroy the group?” It’s probably both.

Elsewhere, Glenn confronts Nicholas in a scene that shows us why we should all be cheering (and therefore fearing) for Glenn, and Sasha’s still going crazy and it’s up to Michonne and Rosita to go after her because girl power (otherwise I don’t see anything else uniting those characters other than they haven’t done much since arriving in Alexandria). The amount of time Sasha’s spending outside the walls hunting walkers is obviously unhealthy, and she’s the one character who hasn’t at all adjusted to the new circumstances, but she’s also not wrong when it comes to killing walkers even if they aren’t immediate threats. To me, the way everyone seems to walk past walkers whenever possible has always felt like letting murderers run around in the dark, and maybe if our heroes had been more proactive, they could’ve prevented some of the herding problems that have so often come up.

Finally, we also catch up with Daryl and Aaron’s recruitment efforts, the two continuing to find evidence of disturbing behaviour beyond the walls. ‘W’’s seem to be scrawled in zombie heads everywhere right now, and it’s becoming overtly clear that the writers are building future threats that go over and beyond secrets and lies and domestic disputes. It’s an interesting change of pace to see our heroes investigating potential threats if only because normally the group seems so far behind the eight ball. Right now it looks like this oncoming threat is of a particularly sadist bent, and at least by next season I’m expecting to see a lot of major character deaths and a lot of sh*t getting real. I for one have been freaked out ever since Michonne’s katana was blocked by those obviously intentionally placed guard on that walker’s neck back in Noah’s village of the damned, and if the show continues to follow the comic as closely as it has this season, we’re in for a level of brutality that’s going to be pretty hard for a lot of you to take. 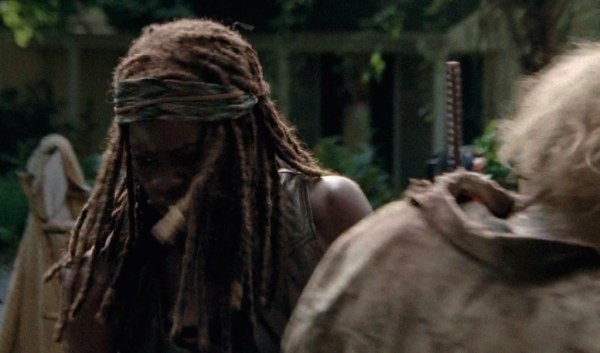 “Limit break!” What the hell?  Who put that spike there?

The one thing I’d say the writers have done well with the little time we’ve had in Alexandria so far is spread our heroes out in different directions. Abraham’s off with the construction crew, Maggie’s been advising with Deanna, Carol’s been ingratiating herself to the community, Daryl’s out recruiting with Aaron, Carl’s been off with the kids. From our perspective, these are people still very much united and following Rick, but from the community’s perspective, particularly for someone like Francine, whose life was saved by Abraham, a lot of the newcomers have done good so far, and the sight of Rick being knocked out by Michonne of all people drives this point home even further. I guess, then, the only major complaint I have with the current storyline, other than some of the characters not having much to do, is that Rick almost seems hellbent on taking everyone down with him. By and large Rick’s been right most of the time throughout the series, but right now he’s handling things with so little tact that it’s hard to get behind anything he’s doing. All of the conflicts that have been building inside Alexandria feel like they’ve been allowed to build, and threats just aren’t feeling as real as they used to.