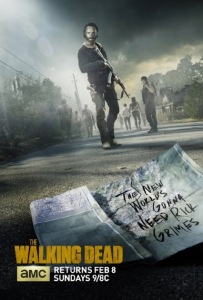 The Walking Dead is a show that’s had character and pacing problems ever since the showrunners decided to keep Shane around for so long past his due date, and that’s a trend that reached its crescendo last season when the Governor’s extended story was allowed to truncate the seasonal arc. While that may be an example of weak storytelling (no matter how valuable it may have been to learn more about the Governor), it’s also an example of how difficult it can be to write for a seasonal structure where a midseason break calls for two different climaxes. Even though the narrative through line should be strong enough to carry the entire season, it’s still tough to match up two different climaxes when they’re separated by eight episodes of material. In choosing a thematic through line rather than a literal one, the fifth season of The Walking Dead has turned out much better than I thought it would so far, and this week’s “Forget” is really the beneficiary of everywhere we’ve been this year.

Ever since we’ve have started back on the path of societal integration in Alexandria, the ongoing question of who and what our heroes have become has consistently popped up, and whether it was walkers, cannibals, depression or strange newcomers, we’ve generally feared less for our onscreen protagonists and more for whoever or whatever was foolish enough to choose the role of antagonist to Rick and co. No matter how grim things got on the sink of decapitation back at Terminus or how thirsty our heroes looked on their 100-miles-on-foot journey to Washington, nothing was going to stop them from getting where they wanted to go, and now that we’re in Alexandria, that sentiment has left many of us worried far more for the Alexandrian civilians than Rick’s group. 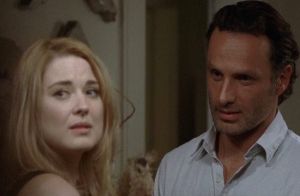 Suave, sophisticated, sexy-stuble Rick is thinking about asking Jessie if she wants to get out of here.

This week we learn more about what it’s like to live inside of Alexandria, and there are shades of storytelling subtlety that just weren’t possible in the world we’ve left because they just wouldn’t have fit. Michonne hangs up the sword, Abraham and Rosita face the horrors of a social gathering, Rick may be veering dangerously down the path of sex predator. Before, there was no time and no call for any of those things with a group constantly on the run, and to be honest, that really started to hold the show back. No matter who our heroes are becoming, at the very least the show spent too long on the outside, and that’s evidenced by how much meaningful character work has occurred over the last three markedly better episodes.

One thing I’ve always hated is when characters are defined more by what’s happened to them than who they are and what they’ve done, and that description has fit Sasha to a T. Up until we were introduced to Bob, Sasha’s been little more than a background character, and even as she’s moved gradually to the fore, she’s never been anything more than the girl who lost her boyfriend and then later her brother. Lately, however, through Sasha we’ve been allowed to see the post-traumatic effects of this world, giving her a little bit more to do. She’s also slowly becoming a character I have a lot more faith in because, basically, they’re just making her the TV-show version of comic-book Andrea, a character who, unlike her TV counterpart, has been alive, useful and at Rick’s side from the beginning, eventually turning into the group’s sniper. If Sasha manages to do nothing more than stay alive and shoot down some key bad guys, I’ll be as happy with her ascent as most of us were unhappy with TV-show Andrea’s descent into shrill, naïve and annoying.

Daryl’s another character who got quite a bit to do this episode, and his story is another striking departure from the comicbook in that there is no Daryl in the comicbook. It’s obvious that Daryl would be on the outs of Alexandria because he’s someone who’s only found agency in this world of the walking dead, and it’s interesting to see his progress in Alexandria being facilitated by Aaron, not only because of the two characters’ differing personalities and backgrounds but because Aaron was never the best served character in the comic. Right now I love the addition of Aaron, the level-headed character the show’s never had (where most everyone in our cast swung brutally and unrealistically in conflicting directions), and his finding a place for Daryl — replacing Eric as the newest Alexandria recruiter — further proves how valuable he’s been to the show in a short time. Though Daryl and Aaron’s interactions this episode will probably lead to some heavy Daryl/Aaron shipping in some quarters, it’s still nice to see Daryl just a little bit more at ease by episode’s end. 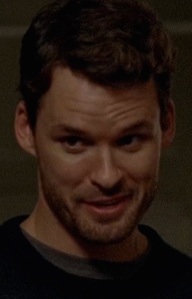 The Walking Dead finally feels like a compelling show for more reasons than the inevitable bloody battles, and it’s slowly becoming a show that’s worth watching without any major caveats. We’re worried about how things will go for our heroes and villains as those lines become blurred, we’re shocked (and delighted) by scenes like Carol’s nightmarish telling off of Julie’s son Sam (even if it does end with the promise of more cookies), we’re mistrustful of Deanna if for no other reason than she seems to have raised two horrible, cocky sons, and we’re worried about Rick’s unraveling and wondering just how much the Rick of today would agree with the best friend he was forced to kill so many yesterdays ago.

Ever since its inception, The Walking Dead has been dictated by the horrors of man being exposed by extraordinary circumstance, and while we’re probably never going to escape that, the tone of the show is gradually changing. Where once The Walking Dead’s intro music told us we were in for a torturous, painful and unrelenting affair, the show’s current narrative seems much more in line with the manic, escalating, and unintentionally disturbing music this week’s episode ends with.  And that’s a good thing.