For a long time now, The Walking Dead has had a huge problem with developing a certain type of character — voices of dissent. From Dale to Andrea to Tyreese, anyone who might have had a valid opposing point and who was clearly operating as the group’s conscience in the face of unrelenting death and violence invariably ended up becoming incredibly annoying even as our heroes slowly became the monsters others should fear. It’s a change perhaps best highlighted early this season with the group’s massacre of the remaining Terminites, but one that’s been been glimpsed as early as season two’s “Nebraska” when Rick shot Dave and Tony in that bar. Right or wrong, our surviving group members have moved further and further away from the virtuous beings they would rather be and have, by now, gone pretty far down the path of straight-up murder as first resort, mostly because the Dale’s and Andrea’s and Tyreese’s tend to die out, and with them their morality. For the most part, these changes in the group have occurred slowly up until this season’s rallying cry — “They’re screwing with the wrong people” — and for most of us, that’s been a good thing, because, again, those dissenting voices were just becoming unrealistic, useless, preachy annoyances right up until they died in deaths that most of us applauded. 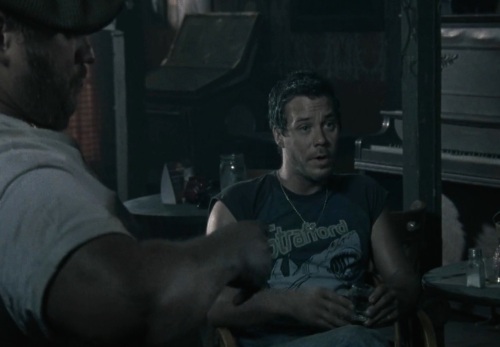 In sharp contrast, “The Distance”, our third episode since the midseason break and following two very down episodes, is finally, finally, moving the story forward by having everyone act realistically, in character, and as we expect them to, and it looks like it’s finally all working out. The voices are all right, all real, and all true to everything we’ve seen to this point, there are no plot-before-character moments that twist the story in an unnatural direction, and yet we still manage to see our characters seemingly take a significant step back toward humanity, all without a single annoying character telling us what the group should be doing instead. In fact, our one new character proves to be an invaluable addition to the show.

Daryl: Nobody gives a shit about your lame picture quality excuses Aaron — there’s no excuse for bad technique!

This week’s episode introduces us to Aaron, a mysterious newcomer offering the group a chance at lasting safety, and it’s one with a seemingly greater promise than anything else the group has seen before. It’s not an easily stormed farm, a fenced-in prison too close to a hostile community, [probably not] a gated community led by a secretly insane dictator, or a cannibal cult luring in victims. It’s steel walls, respectful people, and natural resources, and though those facts seem to be real, what really sells Alexandria, our latest hope for a safe zone, is Aaron himself. As Aaron, newcomer Ross Marquand (who absolutely nails celebrity impressions in his off time) approaches the group respectfully, realistically, and in a way that really seems without malice, and though it makes sense for any organization to elect their most presentable, least threatening and most media-trained people for outreach (if there was still mass media in a zombie apocalypse), there’s something about Marquand’s Aaron that transcends all of those things and just makes him seem like someone you can trust. Marquand just gets the beats of the character so right in the episode, and I think it’s the strongest character debut in the show since Michonne. And the fact that Aaron’s gay? Just more reason to trust him — no gay man can be evil.

Add in a strong character showing for Michonne, a meltdown sequence as Rick, Michonne and Glenn are forced into zombie melee mayhem after graphically crashing their car through a herd, blood everywhere, zombie arms akimbo, formerly internal parts becoming very much external, and you’ve got a pretty winning episode, but not one without fault. There was still a bit of a nagging in the back of my head as I watched, and not one that’s all that suspicious of Alexandria (he said smugly from the perspective of someone who’s read the book), and it probably comes from how hard the whole episode seemed to come down on Rick’s very valid suspicions. Considering the catastrophic nature of their past experiences, it just got to be a little patronizing that everybody was so willing to go along with Aaron, not because anything about Aaron raised suspicion, and not because anyone was out of character, but because of just how strongly the episode revolved around Rick (almost as patronizing as the implication that homosexuality naturally cancels out evil). It’s a storytelling choice that makes sense, but the whole thing got to the point that it almost felt like a Rick-oriented dream sequence where everyone was against him.