Possibly for the first time ever, we begin the latest episode of The Walking Dead with three separate storylines, each of which are stories that most viewers would actually wanted to follow. We’ve got our group’s hospital infiltration, Beth and Carol’s continuing adventures in the hospital, and Abraham’s road trip (plus the usual “Carl isn’t old enough to come along” sidestory). Of the three, Abraham’s group draws the short straw, where the only even mildly notable things that happen are some minor character development for Rosita, some fishing, the discovery of a yo-yo, and Tara further exposing her terrible sense of humour (more from her apparent lack of wit than the Gallows direction she’s trying to take). I’m starting to feel a little guilty for how hard I’ve come down on Beth, mostly because Tara also deserves a fair amount of that animosity if not the majority. What a horrible, useless addition to the group.

Meanwhile, back at the church, Rick and Co. are barricading the church (for general defense purposes?) before heading out to save Beth and Carol, while back at the hospital, Carol’s still unconscious and the writers are trying to fit Beth’s square peg uselessness into a round hole of toughness and ingenuity. Rick’s plan is to draw officers out of the hospital with gunfire to wittle their group down to as small as possible before stealthing their way in and outnumbering the remaining opposing force, which should be a snap since everybody hates Dawn and, according to Noah, will turn on her at a moment’s notice. Inside the hospital, Beth possibly saves Carol’s life by injecting her with epinephrine (which even I know is just adrenaline) after Dawn gives her keys to the medical cabinet in a series of decision-making processes that only really make sense in Dawn’s mind (which I’m secretly hoping is just a way for Dawn to justify giving Beth another slap [and a third set of facial stitches]). 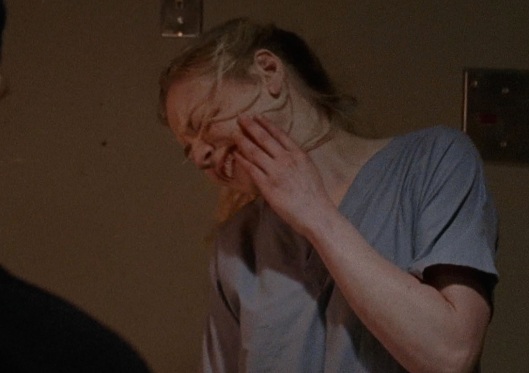 Rick and Co.’s hospital siege receives the lion’s share of attention, and we get to meet Officers Lamson, Generic-Girl, and Probable-Cannon-Fodder, who the group captures rather than kills after Tyreese convinces the group that they could be useful as hostages. That plan of Rick’s I laid out last paragraph? It was originally to kill everyone as they went along, but bleeding heart, liberal Tyreese keeps making his overtures toward humanity, fooling our group into a false sense of “Maybe we don’t need to kill everyone.” Frankly, the group that Rick gathered, though built mostly by circumstance, is highly questionable. Obviously Sherriff Rick and Deputy Daryl are going to lead the way, and I get that Noah’s along for his insider knowledge, but really, a cripple, a guy who won’t kill anything that’s not already walking dead, and Sasha, the girl who just lost her boyfriend to equal parts zombie bites and cannibal attacks? You really couldn’t have brought along katana-wielder Michonne on your ninja-stealth mission? I understand that leaving Sasha behind with Carl doesn’t make sense since the two have yet to say anything to each other, but nobody cares what’s going on back at the church anyway.

And as long as we’re talking about back at the church, WTF Gabriel?! Seriously, WTF?! That nail you stepped on? Definitely a sign from God that whatever you’re doing is dumb.

So anyway, the officers convince the group that Dawn’s already on edge and quickly losing support, Lamson in particular gaining favour among Rick and Co., and here’s where I kind of lost the plot. It’s hard to tell who stayed behind and who left (there are literally moments where people that you can’t make out are milling about in the background) and under which plan Rick and Co. were operating under (they didn’t really elaborate), but the important part is that Lamson tells left-behind Sasha some sob story to gain sympathy, suckers her in so he can knock her out, says Hail Hydra (I might have imagined that part), and takes off after Rick and Co. and their shaky, ill-defined plans.

Cut off one arm, two more shall take its place!

I didn’t really have a direct problem with anything in this episode (other than Tara, who’s annoying tendencies this episode have now put her square on my Walking-Dead-characters-I-hate radar), but everything about it felt a little clumsy and anti-climactic, especially with the brief ray of hope we got from the seeming conclusion of Abraham’s road trip, which went against the mid-season finale vibe everything else seemed to be serving. Ultimately, “Crossed” will probably wind up simply being a point-A-to-point-B, means-to-an-end episode in the grand scope of The Walking Dead, and at least in that respect, it’s still better than a lot of what we’ve seen from previous seasons. Again, except for Tara.