I kept on re-writing the end of last week’s “Strangers” review because I couldn’t decide on how much I thought was okay to reveal about what happened to Dale in the comics. After this week’s “Four Walls and a Roof”, I’m glad I didn’t reveal too much, because this time around, roughly the exact same thing happened to Bob. Tainted meat!

While not calling for the most intricate of plots (Terminites/Hunters try to scare Rick & Co. with Bob’s missing leg, Terminites/Hunters fall into Rick & Co.’s trap), quite a bit happened in this episode in terms of milestones.
The Terminites/Hunters storyline is fully resolved with their grim, grisly deaths, we lose a member of Rick & Co., we examine moral quandaries in a way that doesn’t feel too cloying or insincere, father Gabriel stands revealed, the group splits up, and we’re already on to our next threat.

As always, there’s been a bit of chatter about killing the Terminites/Hunters, both whether it was necessary and whether it needed to be so brutal, and while the answer to both seems obvious (“yes” and “yes”), it’s at least a conversation more worth having than just about anything else that’s ever happened in the show. There’s been a pretty distinct arc going on with Rick for a while now, but it really took hold with last season’s finale (“they’re screwing with the wrong people”), and now we’re seeing the results of that arc come to fruition with the church showdown. The sight of our heroes going totally sickhouse on living people is always going to seem a lot more savage than the usual walker attacks, but the real turning point comes when Gareth asks Rick why they haven’t killed them yet, hopefully intimating that Rick will let them live, and Rick responding quite plainly, “We didn’t want to waste the bullets.” That’s a statement made up probably of equal parts practicality and intentional cruelty, and it shows the cold-blooded and calculating operating platform the group’s now willing to work from. 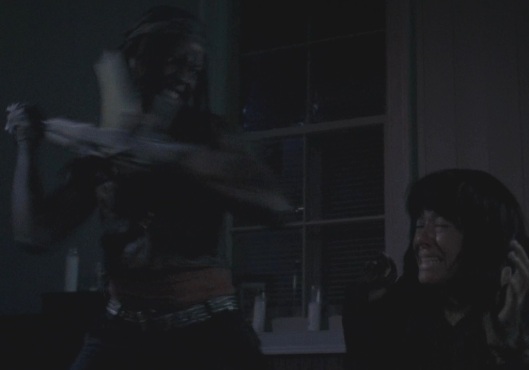 While all of this is a sharp departure from the moralistic overtones of seasons past, with our Dales and Hershels and Andreas doing their best to derail what makes obvious, practical sense in the name of too-far-gone people somehow working together, what grounds the episode and makes it work, surprisingly, is Bob, whose grace in death brings our characters back to their humanity without falling into the pit of false morality that always made those other characters so annoying. After more than a whole season of having this hard-to-pin-down, but relatively innocuous character hanging around, we finally have a reason for Bob.

A presence that’s been a little more troubling over the last two episodes is that of Father Gabriel, whose deep, dark past turns out to be condemning his flock to death-by-walker when he locked them out of his church/church-donated supplies (which probably includes that bespectacled church-lady-organist-turned walker we saw last episode). That’s an interesting enough contrast for what Gabriel’s supposed to represent, but between the elements of piety inherent in organized religion that have always rung false and the fact that Kirkman never did much with the character in the comic, I really don’t care about Gabriel so far, and I probably never will.

What ultimately makes “Four Walls and a Roof” work as well as it does is that it shows us that the producers may have finally learned from past mistakes. They’re clearly no longer too attached to their villains to let them go when the time comes, they’re ready to keep the story moving, and they’ve finally found a way to turn the morality tales of the show into something a lot more organic and a lot less forced. While Bob may have oscillated between almost useless and mildly annoying at times, and while he may have temporarily presented us with irrelevant tangents like alcoholism after the apocalypse, in the end he made a difference. For at least one, brief moment, he made all these people on this show about zombies finally seem real.

The Walking Dead “Four Walls and a Roof” final score: 8