So in a lot of ways, The Walking Dead has gotten progressively worse since its six-episode launch, all the way back in 2010.  Beginning with a strikingly shot, strongly paced and compelling first episode before settling into a tight, dramatic and fairly realistic overall arc (except for that one episode… you know the one), in many ways that first season was the high watermark for the entire series.

Now, when people tell you what’s good about The Walking Dead — that it’s exciting, that the action is well done, that nobody’s safe — they’re not entirely wrong.  On a technical level, the show does look like a post-apocalypse zombie world and all of the maiming and killing and set pieces look fully realized — the execution of the good parts is all very strong.  It’s just the storytelling that doesn’t add up.  We spend too long in places (the farm) and it really slows everything down, things are drawn out for way too long (letting the Governor live beyond the natural conclusion of his seasonal arc), we’re introduced to incorporeal threat (the virus), and we see characters hang around for three seasons without ever being fleshed out (T-Dog).

On the other hand, The Walking Dead is a show you just kind of don’t stop watching.  Yeah, everywhere you look the characters are making dumb decisions that only serve to further the plot, yeah, the show’s themes are delivered with all the subtlety of a hammer (or knife or bat or board with nail) into a zombie skull, yeah, the comic’s still ten times better, and yeah, zombies are slowly shambling their way out of the most populated parts of the popular culture, but if you’ve stayed with the show for this long, it’s probably too late.  You, me… we’re all infected.

Right now, I don’t know if the showrunners just don’t know how to write for long-term villains or if they just have some better ideas coming up. I’m very much in doubt of the latter.

So, welcome to our coverage of the fifth season of The Walking Dead. For our premiere episode we get… basically the back half of the last of episode of last season. The right people are killed, walkers are slain, the right people get away, and that’s about it. It’s action packed in a way that both illustrates how well our heroes have adapted to this world and makes some of us wonder aloud, “Oh man, if they blew this much of the effects budget on the first episode, then how slow are the next bunch of episodes going to be?” 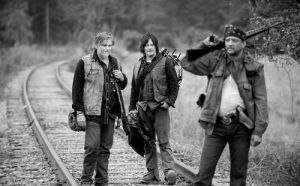 Like the Jerks before them, the denizens of Terminus proved to be an overblown and undercooked menace as Rick and co. escape their grasp at the first opportunity, kill at least 13 of them, including former Next-Generation-abandoner Denise Crosby’s Mary (who’s surprisingly effective in her role despite how little she gets to do), save everyone worth saving, and escape without injury. The fact that Terminus leader Gareth doesn’t die in the episode surely suggests that we’re not done with him yet, particularly considering that there was at least an attempt to give the Terminans a backstory (basically “don’t do unto others”), but so far the whole Terminus thing sure looks like a threat without teeth. Well, as without teeth as you can be while being cannibals. Yeah, they don’t directly pick up on that vibe in this episode either, but c’mon. I’m not sure whether to feel better about the Jerks’ rapiness or the Terminans’ wilful entrapment and cannibalism, but I’m definitely leaning towards the latter as slightly more palatable (which might not be the right word to use in regards to eating human flesh).

One thing this episode definitely reminded me of is my previously mentioned love of Carol, who’s gone from abused shrinking violet to tactical sniping, crazy-kid killing, leader of men and walkers. In some ways she’s taken over the role that Andrea got in the comicbooks, particularly with the sniper bit, and it kind of feels like the gang’s a lot safer with her back in the fold. In this episode, she immediately sees through the Terminans’ crap, proceeds with the certain knowledge that she’s going to have to cut them down, builds an army of zombies, and is instrumental in our heroes’ narrowly avoiding being made into human chow. 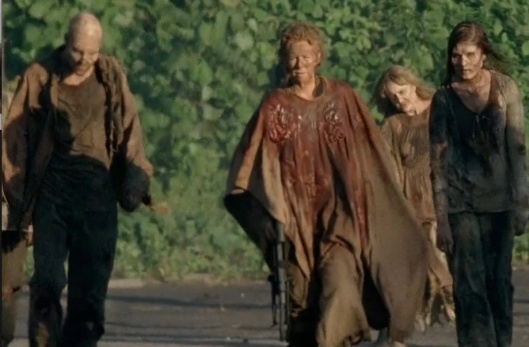 Zombie Hobo with a Sniper Rifle.

Tyreese also gets to do something important in this episode, even if it’s more along the lines of personal growth. Initially saddled with babysitting Judith and the Terminan he and Carol captured because he was too scared to fight (?), Tyreese is eventually forced to (re)kill a bunch of walkers encroaching on his cabin/hideout and then also kill the Terminan, who was being an a**hole. Seriously Terminan, threatening to kill a baby? That’s almost as bad as being a cannibal rapist (which somehow sounds better than “rapist cannibal”, even though that order makes more sense… maybe that’s enough talk about rape and cannibalism… for today at least). What’s especially great is that Tyreese stayed and waited for Carol and co. to come back. None of the usual crap like Carol telling Rick and Carl that Judith’s alive and okay only to return to a burnt-out cabin after what must have been a terrible struggle, Tyreese and baby nowhere to be seen, putting Rick and Carl through even more torment. No, this time they were just where they were supposed to be.

“No Sanctuary” doesn’t really do anything unexpected, but it does show us two important things:

I have nothing but doubts when it comes to The Walking Dead’s ability to not be highly, highly questionable in almost everything (while still being just good enough to keep watching), but if the showrunners really do have a better idea than the menace of Terminus, then maybe we’re all in for something more than just a show to make fun of.