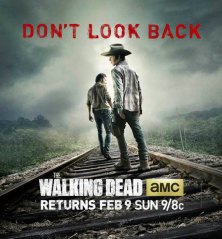 For me, after a more-than-two-month absence and a status-quo-shattering midseason finale, the thought of more Walking Dead elicits almost equal parts desire and dread.  No matter how you feel about the show, no matter which of its strengths and flaws you acknowledge or deny, you have to admit that The Walking Dead is an exhausting show.  When Robert Kirkman initially set out to write a continuing story about what happens after the horror movie, as compelling a premise as that may have been, I don’t know if he knew that the results could sometimes be so awful.  What this shows us is that, at the end of the day, as much as people’s instincts may lead to jealousy, rage, hatred and murder under the right circumstances  (and that may make for some interesting stories), most people aren’t any of those things so much as they are… just fundamentally awful to be around (at least in the long term).

“After” picks up soon after the destruction of the prison, our wayward heroes’ home (and prison) for the last season and a half, after the deaths of Hershel and the Governor, and after our familiar group has been scattered to the four winds.  Opening with a scene of Michonne running across and stabbing the brain of the zombified remains of Hershel (our conscience and the voice of reason), it becomes clear how much the writers want us to interpret what we’re about to see as a strong departure from what’s been a generally entertaining, but often dreary and drawn-out mess. 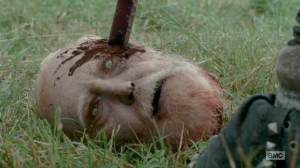 Next week’s episode promises to show what’s happened to the rest of our group post-prison, but this week we focus on two comparatively smaller stories — First, Michonne’s desire to reconnect with humanity and second, how even zombie apocalypses leave room for the natural growing pains of sons and fathers.

On the Michonne side, we get a bit of backstory as it’s revealed that she, at least, had a son, husband (or lover) and friend, in addition to the trappings of a normal life.  Seeing Michonne’s former life was surprisingly refreshing, departing considerably from the show’s usual style by providing reasonable amounts of information through natural dialogue.  The scene is one of the most realistic moments I’ve ever seen in the show, and it conjures a surprising amount of meaning and feeling by suddenly juxtaposing the more idealized times of Michonne’s life against where she and her family would eventually end up.  We don’t spend a lot of time here, but the whole thing really goes to show you how much more you can get from showing rather than telling.

Meanwhile, Rick’s barely conscious after the beating he received last episode, so it’s up to Carl to TCB (take care of business).  After clearing an abandoned house, Rick falls into a deep slumber, giving Carl the opportunity to act out, in some ways acting as the voice of the audience in blaming everything that’s gone wrong on Rick.  Carl twice barely survives his solo outings, protecting the house and scavenging for food, but you never really get the sense he’s in danger.  As reckless as Carl’s youthful actions seem at times (though not necessarily any more so than an adult’s [and as if you’d do any better]), it’s all part of the grander narrative of growing up zombies.  And that narrative usually doesn’t end until those characters have actually grown up. 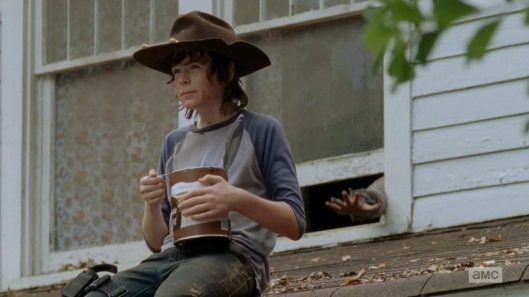 A giant can of chocolate pudding? That’s just empty calories. You need protein!

“After” is an episode that’s better in retrospect, and one that ends on an unusually bright note.  What remains, however (especially considering next week’s preview), is a show that still has fundamental problems.  A zombie setting provides for any number of styles (see:  World War Z, Shaun of the Dead, Zombieland, 28 Days Later), but The Walking Dead seems particularly bent on inevitability — the inevitability of broken spirits, the inevitability of oppression, the inevitability of evil, and the inevitability of people being awful to be around.  And sometimes, it’s hard to watch something like that for 13–16 weeks in a season.

The Walking Dead “After” final score:  7

-Y’know what’s gross?  In a world without running water and scarce resources, how clean could the utensils people are using possibly be?  Are people just using the same spoons they’ve been carrying in their pockets and wiping off on their shirts or pants between meals?