Platonic, adj. “The state of a relationship between two people if there is absolutely no chance of them banging in the next twenty minutes.”

Some people seize the day, grab life by the horns, #YOLO, or whatever they call the desire to control their own lives, the course they take, and where they end up. Other people just wait for the universe to hand stuff to them. And those people, like the Washington Generals, always lose.

So let’s talk “Platonish.” It’s a flashback episode, which was a nice breather from all the wedding drama, in part because I’m tired of seeing Marshall in an SUV. Robin is upset that her mom won’t come to the wedding, so Barney accepts the challenge and tells her the story of the greatest challenge he ever accepted. We’re taken back about six months (I think; I really have no idea), to a time when Barney and Robin aren’t yet engaged, and Barney is still happily throwing himself into his bachelorhood and every woman in New York City.

Ted and Marshall go to a basketball game (I think it’s the Washington Generals versus the Harlem Globetrotters, but that’s not relevant) and discuss the nature of Ted’s relationship with Robin, as well as the fact that, as long as “happily ever after” is only twenty minutes away, the two of them will never be together. Ted insists he’s okay with this, because if they’re meant to happen, they’ll happen; that’s just the way the universe works. Grand gestures don’t work anymore, he says, because it’s not eight years ago, and people don’t change.

Let’s skip over to Barney. Lily and Robin are setting him challenges for picking up random chicks, which he completes in spectacular fashion: 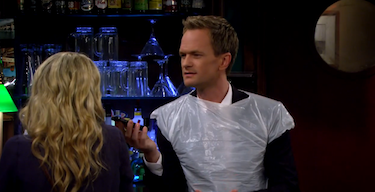 Finally, they send him to a drugstore for diapers and a samosa. While there, Barney runs into a certain big-eyed brunette and announces her as his next target. Unfortunately, he has no idea that he’s just hit on the most perfect woman of all time, and she sees how miserable he is, effectively shuts him down, and looks him in the eye, saying, “You’re gonna get through this.” He tried to shrug it off and scam on some other girl, but his heart just isn’t in it anymore. And that, ladies and gents, is the last time Barney ever tries to hit on some random woman, because he doesn’t want to keep playing: he wants to win.

So they sit on a bus bench, and Barney tells the Mother the story of him and Robin, and how everything went wrong. He muses that they could be together in twenty minutes, but the Mother shuts that down, too. She tells him that this won’t just take twenty minutes, but that it will take all his time, all his resources, and everything he’s got, because when it’s the Big One, you’ve got to do it right. “You can’t be messing around, picking up girls in drugstores.”

While all this is going on, Ted is still talking about the way things work, about how you just have to wait for the universe to give you the things you want. And that’s because Ted is so, so desperately afraid of getting shot down again. See, when you leave things up to “the universe,” you’re absolving yourself of any responsibility or any stake in your own future. Things don’t just work out one way or the other.

So yeah, I’m more than fed up with Ted. But now he’s seeing just exactly what his cowardice is getting him: diddly squat. He has to watch and see what his inaction cost, which is the one woman (or so he thinks) he has ever really loved. I mean, it’s true that he lives in a universe where the universe really is working itself out in his favour, which takes some of the punch out of my opinions, but I think they still have merit.

Yeah, okay, so maybe you just manage to catch the bus you wanted, and even managed to find a seat. Maybe you found a box of frozen waffles in the fridge when you weren’t expecting to. Maybe you met someone you weren’t expecting to, and your life became a better place as a result. But don’t mistake coincidence or dumb luck for a universe-given right. Even if the universe does work that way, eventually it’s gonna throw up its hands and say, “F*ck this guy, I’m going to a Generals game. At least those guys try.”

If you want something, whether it’s a degree or another person or even just a box of friggin’ frozen waffles, you have to go out and get it. Because when you’re lame like Ted and just leave it up to fate and chance, awesome guys like Barney are figuring out what they want out of life. They go home, they pick up a pen, they write down the last play they’ll ever need, and they absolutely throw themselves into the future.

And what are you doing? You’re thinking about asking someone to get you some frozen waffles.