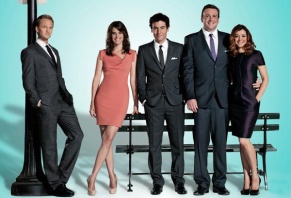 Tonight, though, the episode started out with references to Indiana Jones and the Last Crusade, and it only got better from there. So I would say I was pleasantly surprised. And now I’m going to explain why, because this is a review and that’s what people do in reviews.

Let’s start with Barney and Robin, because they’re the most entertaining. Remember the story of how they first met? “Hey Barney, see that girl?” “Oh, yeah, you just know she likes it dirty.” Well, they couldn’t exactly tell the uptight minister officiating their wedding that their history is a sordid one full of drunken debauchery and cheating and oh god why do I ship these people when they’re so terrible? Oh, wait, it’s because they’re terrible. Except they don’t realize right away that that’s what’s awesome about them (I’ll explain in a second), and so they lie, and they use Lily and Marshall’s how-we-met story.

They’re forced to come clean, and when they do, the minister refuses to let them use his church. So they absolutely clear out the attic as far as secrets go, to the point that the minister literally has a heart attack or an aneurysm and dies in his chair. Problem solved, I guess!

Yeah, it’s a bit shocking to me to see Robin and Barney’s history laid out like that, with all the things they’ve done wrong to each other and to other people. But to me, it kind of says that, throughout everything that’s happened, they were always supposed to end up together. And it was only when they fought it that bad things happened.  It’s sort of sweet, in a way, that when they’re together, they can wrap up all those bad things and throw them at other people instead. Like the minister. Who is dead now. And is also the uncle of Ted’s super unfortunate date.

Oh, yes, Ted now! Robin and Barney chose to help Ted score some hot tail at the B&B’s bar rather than write their wedding vows (red flag there), so they show him three women to choose from. And remember how I said something about The Last Crusade? Yup, that’s ’cause Ted chose Audrey from Pitch Perfect, and he chose… poorly (even though she’s even more stacked than IHOP). Her life basically falls apart while he sits there helplessly, and it’s actually kind of painful to watch. Not even because she’s super pitiful when she cries, but because I’m understanding exactly why Ted’s choosing poorly.

Not his motivations, no. I don’t know why guys go to weddings and hook up with random hotties they’ll never see ag— oh, wait, now I do. Anyway. No, I’m looking at the whole situation and realizing that he could’ve totally screwed up his chance with the Mother, ruining his entire life. And part of Ted realizes that, because the knight from The Last Crusade keeps showing up and letting him know when he’s chosen… poorly. Yes, there’s the moment at the end where he actually says that, but it says a lot that he’s hallucinating the knight from a movie so he can see exactly how much of a mistake each thing is. Not in the grand goal of getting him laid, but as a road sign to a much, much larger mistake that could haunt him for the rest of his life and affect his children. Namely, in that they wouldn’t be there.

So that’s supposed to be what the whole point of the episode is about, I think (that would be the titular knight in this week’s episode title), but that just ties in with what’s shaping up to be an epic conflict.

Marshall and Daphne are driving (quelle surprise) and she decides to coach him through the big conversation he needs to have with Lily about accepting the position as a judge. As is anything when you involve a sassy black lady, it’s loads of fun, but Marshall is getting impatient with having to repeat the scenario over and over, and he lets slip that he’s not just thinking about the job — he already took it.

Daphne gets peeved on Lily’s behalf, which is nice to see, especially as she knows how it is, having a husband who doesn’t support her dreams. Except her dream is to continue being a big oil lobbyist (I’m a little fuzzy on what lobbyists actually do, but I think it involves standing around in hotel lobbies until politicians come through and you can badger them about things. Right?). Marshall calls her the devil and storms out, and then Daphne texts Lily and tells her what Marshall did. And then Marshall’s phone rings.

The judge issue has been skated over for the last few episodes, but Daphne raised a good point: Marshall is putting himself and his own dreams ahead of Lily and hers. I’m not saying his cause is a bad one, or that Lily uprooting the family to move to Rome is a good one, but I am saying that I’m seeing a crack in Lily and Marshall’s perfect relationship. The last time one of them kept a secret this big, it was Lily’s credit card debt in season 3, and that ended in a colossal fight and a call to the divorce lawyer.

And if Marshall doesn’t handle things carefully, that could happen again. So I’m waiting pretty eagerly, and more than a little worriedly, to see how this turns out.

<< Last Episode: The Poker Game
Next Episode: No Questions Asked >>