So first order of business. I just finished my third year of university (yay me) and my fourth is my practicum. This was my first week at an ad agency (also yay me), and in honour of that I thought I would do a Mad Men review, because I was silly enough to think that watching Mad Men would be adequate research for the fast-paced world of advertising. Pro tip: it’s really not.

For one thing, I’ve yet to see an actual client (but that may be because the boardroom is downstairs and I work upstairs). For another thing, I haven’t yet found any alcohol sitting on conspicuous, well-stocked sideboards. For another, it’s been four days and I haven’t yet been smacked on the ass and called “honey.” I’m not disappointed or anything, but I did think my life would be a lot more like Peggy Olsen’s (minus the casual hookups and resulting pregnancy).

In my office, everything is done on shiny iMacs (I get a MacBook, because I’m special). Everyone is casual and irreverent and they all wear jeans. I’m loving every second of it, but I’m reminded how much the industry has changed over the last fifty years. Is that to be expected? Well, yeah, duh. I’m not going to go on about “the digital age” and “social media,” because the only people who do that are the ones old enough to remember a time before all that. I’ve been using computers since I was a kid, and I got my Facebook account when I was fifteen. I’m reasonably tech-savvy (although I broke the company website for about two minutes today). I know how we communicate with audiences now and what it takes to connect with them, even just for a second.

What is Mad Men about? There’s been some confusion about that point, as you can see here (warning: naughty language). Simply put, it’s about the ad men of Madison Avenue who created advertising as it stands today—for the first three seasons, at least. It wasn’t about presenting your product and trusting that loyalty or a low price would earn you business; it wasn’t even about making your product seem better than your competitors’. It was about making the customer believe that your product would make their life better. And that’s funny, because nobody in the show is happy.

“I just met you and this is crazy, but there’s an empty bathroom stall there and– oh, hey, your skirt’s already off. Awesome.”

That’s the simple version. The long version involves a large cast of characters with unique backstories of their own, which range from “serial adulterer” to “hipster communist” to “closeted homosexual.” We see attitudes and behaviours that would be utterly unacceptable today (smoking on planes, smoking and drinking while pregnant, and driving drunk, for starters) treated with such blasé acceptance that I just sit there on the couch, trying to decide whether to laugh hysterically or start swearing at the TV.

That’s really all you need to know; the plot isn’t important, particularly as it’s somewhat scattered and stories are left without any resolution. What’s important are the people themselves, and three in particular. For me, these people represent the point of the story, and maybe you’ll understand why.

Don Draper is a liar. He is also a cheater, a coward, and a thief. I hate him, as I do anyone who hurts people without any regard for their feelings, and he makes me incredibly angry every time he opens his mouth or unbuckles his pants. And maybe that’s why I find him so engaging. I’m not saying I like him; don’t think that for a second. It’s like watching a train wreck: it’s too awful to look at, but it’s such a spectacle that you feel you ought to look, and when you do, you can’t tear your gaze away. 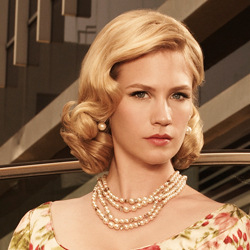 This. This is the slammin’ hottie he’s cheating on. Dumbass.

A prostitute’s son. An orphan. A runaway. A Korea vet who stole his dead CO’s identity. A husband. A father. An adulterer. A man of power. Don Draper is all these things, and he doesn’t seem to mind. Roger Sterling [of Sterling Cooper] cheats on his wife for the intimacy, not the sex. Don wants the intimacy, too, but he doesn’t feel he deserves it, so he just pursues the sex in the hope that it will satisfy him. But he’s well on his way to plowing half of New York City and he’s still not satisfied. He’s a brilliant creative director and dead clever to boot, but he’s not a good person, not by a long shot. In fact, nobody on the show is.

His wife, Betty Draper, starts out Season 1 with hand tremors (which I believe are left unresolved), so she goes to a psychiatrist. There’s some stigma around that, of course, as head doctors are “for people with more money than sense,” but she goes anyway, after getting Don to reluctantly agree. She was lovely for the first season and a half… until she found out about Don’s affairs and kicked him out. (And then had his baby later. This show is kinda weird.)

Wait, wait, hold on. She had every right to be upset with him; I know that. If that happened to me, I would be absolutely livid and nobody would want to be around me because I’d be a burning ball of pure rage all the time. But she let it make her bitter and angry, and by the end of Season 3, her children are clearly afraid of her. She’s divorcing her husband for another man, who seems like a nice enough guy, but Betty’s been poisoned by hatred, and I can tell the marriage won’t be a happy one.

I don’t know what it was really like in the ‘60s; I don’t know how married couples treated each other. Were they faithful? Did they cheat? If they did, did it matter? Did they just sweep it under the rug and pretend it never happened? I’ve heard about the way things were from movies and from my mother, but it’s so far in the distant past as to be fictitious for me.

I’m glad Betty was able to get out of a destructive relationship with a man who didn’t respect her. I guess I’m just disappointed that it didn’t make her stronger in the process. She’s really representative of the “housewives of America” group, and it would’ve been nice to have some development there that didn’t involve skipping from one man to the next.

This is basically me in a dress.

Peggy Olsen, on the other hand, enjoys the single life, and she starts the show in a bad way but only gets better. She hooks up with Pete Campbell (Pete. F*cking. Campbell.) right before he gets married, and she’s immediately knocked up—but she doesn’t know it. That by itself seems implausible to me, since you’d think she’d feel the kid kicking (maybe she thought she just had indigestion for six months?) or at least notice the lack of certain events at a certain time of the month. I mean, Peggy noticed she was getting fatter, so she should’ve figured something was up. She gets promoted from secretary to copywriter and spits out a baby the same day, followed by a period of time in which she’s so depressed she can’t leave the hospital.

And then she comes back. Slim, sassy, and kind of scary, Peggy jumps back into the thick of things with a determination I envy. She goes on to get her own office and secretary, handle major accounts alongside well-established writers with the company, and smoke pot one weekend, because why not. She goes from timid to tenacious in the space of a couple seasons, and I absolutely love her (and also her hair, because the ponytail had to go).

Although I really want THIS to be me in a dress. Hot damn.

That’s only a fraction of what the show is about, I think, but that’s what stuck with me. In my opinion (because this is where we post opinions, not definitive facts about things), this show isn’t really about the people at all. It’s about what was considered acceptable in a time when nothing was certain, when every day could be your last, when the only thing to live for was right now. People lived as though their lives had no consequences because The Bomb was looming over their heads every second. I guess Mad Men is a good answer to the question: what would you do if this day were your last?

You can do everything (or everyone) you’ve ever wanted to do. You can be angry and rail at the world that’s treated you unfairly. Or you can make the most of yourself in the hope that something of you will be left behind, and even if it isn’t, at least you know you tried.