Excuse me, I must have something in my eye 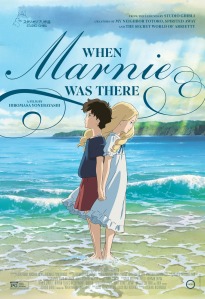 When Marnie Was There images courtesy of Toho and GKIDS.

A lot of our greatest fears (y’know, other than “shark!” or “sock puppets!”) centre on being alone. Really, really alone, without a genuine connection to anyone, that feeling of being set aside, cast adrift, that we don’t matter and that no one cares.  It’s only natural that at some point in our lives we’ll find ourselves overcome with feelings of isolation, whether it’s out of a natural anxiety, a sense that we’re different, or simply because we don’t know anyone yet. That’s something most of us overcome at least to some extent, but for those few of us who are truly alone — with no close friends, family, or even acquaintances — the real horror of that loneliness is that, more often than not, we did it to ourselves. It tends to be that it’s not that hard to make friends, it’s just tough to meet new people, but what’s easier than either of those is to simply stay quiet and fade into the background, in the vague hope that someone, someday will finally tell us, “there’s nothing wrong with you,” and really mean it.

At the beginning of When Marnie Was There, we’re introduced to our young lead, Anna, as she sketches the busy public playground scene in front of her. Children are running in every direction, on swings and play sets, in the sand and on slides, and Anna, though still a child herself but one old enough to have outgrown child’s play, sits on a nearby bench, alone, while a group of popular girls gossip on the benches away from hers. When Anna’s teacher asks to see her drawing, she hesitates, insisting that she messed it up, before gradually warming to the teacher and handing over her sketchbook, only for his attention to suddenly be directed elsewhere when one of the younger children is hurt. As Anna watches the teacher leave, she’s overcome with anxiety, barely able to breathe, the nervous impulses in her hand breaking her pencil as she thinks, “I hate myself.” If you don’t understand what’s going on in this scene, if you don’t immediately have at least a bit of sympathy for Anna, then this movie probably isn’t for you.

Either that or I’m terrible at describing movie scenes.

Anna is a quiet, introverted middle schooler who has lived in Sapporo with her adoptive parents from a young age. Though as happy and outgoing as any normal child in her younger days, Anna has become increasingly withdrawn, barely interacting with her fellow students, her sense of isolation only increasing as her asthma has gotten worse. Travelling to the seaside town of Kushiro to see if the clearer air could help with her breathing, Anna quickly becomes obsessed with the vision of a mansion off in the distance across the marsh by the seaside docks, and one night she meets Marnie, the young girl who lives there. Anna and Marnie quickly become friends, throwing picnics, getting into mischief as Marnie’s parents throw glamorous parties at the mansion, and sharing their innermost thoughts and feelings. But Anna can only find Marnie at night, and when she visits the mansion during the day, it appears dilapidated, almost abandoned, as if nobody had lived there for several years.

Unlike here in North America, where a lot of people, sometimes right, but often wrong, assume the mediums of animation and comicbooks define their message as juvenile, in Japan they’re for everyone. Japanese people of all ages watch animation and read comicbooks both privately and publicly, and it doesn’t really matter if what’s onscreen is animated rather than real life or if the prose being read is accompanied with corresponding sequential art, because those mediums have no particular bearing on the content’s perceived depth, meaning, or quality.

Spirited Away, a.k.a. Riding in Trains with Ghosts, a.k.a. the most successful movie in Japanese history.

Animated features are allowed to become both widely celebrated and culturally relevant in Japan, and the most popular of these animated features are the works of Studio Ghibli, whose movies, including Spirited Away, Princess Mononoke, and When Marnie Was There, have generally seen only limited release at best here on this side of the Pacific. These animated movies aren’t necessarily that much better, more mature, or better produced than ours (though on average, they do tend to be all of those things), but they’re created with what may be a little more respect for their audience if not at least the understanding that that audience won’t automatically attach the usual cartoonish stigmas that accompany animated movies in other countries.

For their part, several of Studio Ghibli’s movie releases have been the top grossing films in their respective year of release in Japan, and almost half of the top ten highest grossing movies of all time in Japan are Studio Ghibli movies. Unfortunately When Marnie Was There only earned a bit more than half a million dollars at the North American box office after its May release. To put that in perspective, Jurassic World, the biggest movie of the year, made 1300x that much (and was terrible), Fantastic Four, which is so far this year’s most notable financial and critical failure, made 111x that much, and Shaun the Sheep, another animated import that most of you also haven’t heard of, made 37x that much. To put that even further into perspective, there’s a good chance both you and I will make more than half a million dollars in our life times (if not much sooner).

What’s perhaps even more unfortunate is that When Marnie Was There may be the last Studio Ghibli movie ever as the studio halted production after the movie’s 2014 release in Japan and the retirement of the studio’s chief director and primary driving force, Hayao Miyazaki. Though Ghibli is said to be merely taking a brief pause for restructuring at the moment, it at least seems certain that When Marnie Was There will be the last produced under the system that has turned out so many seminal works.

Yes. Very. Though it isn’t for everyone. And it’s not really that fun. When Marnie Was There is a movie defined by deep emotionality more than anything else, and for a certain type of viewer — it’s core audience — there’s an intimacy and meaning in almost every moment and event that can make it almost eerily heartrending. And, surprise! It’s also a cartoon. 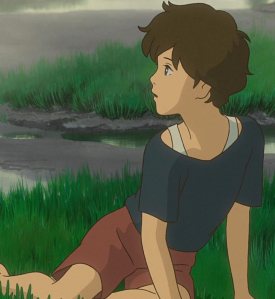 Anna: This fresh air may be helping my asthma, but am I supposed to be blacking out so often?

More than being withdrawn, our lead character Anna is on the verge of living almost entirely inside her own head. As the story begins in a children’s playground (and as you may have heard in the trailer), she believes that “In this world, there’s an invisible magic circle. There’s inside and outside… I’m on the outside. But I don’t really care.” Though she isn’t outwardly different than any of her peers, she has her own reasons for not feeling right, including her relationship with her adoptive parents and feeling abandoned by her biological family, and it’s clear that at this point she sees herself as so inexorably different and so separated from everyone and everything around her that she’s lost all sense of self worth and belonging. She doesn’t just feel isolated, she outright hates herself and sees herself as a burden to her adoptive parents. She not only avoids attention, she actively seeks to not be seen or recognized, physically recoiling at others’ presence as if she might shatter at the slightest touch.

After meeting Marnie, Anna slowly begins to come out of her shell, but she also starts building a bit of a reputation around town for staying out late at night, particularly from Mrs. Kadoya (who’s a bit of a town busybody [and whose daughter Anna earlier called a fat pig in an outburst of emotional instability]). Soon after, however, Anna loses track of Marnie, spending a week without seeing her, but makes more friends in town as she tries to discover who Marnie really is. From a certain perspective, it’s nice to see Anna start to get along with more people, but it’s never examined so much as it’s simply an incidental artifact of following the ongoing mystery. Anna may be gradually getting over her hang-ups and some of the more negative beliefs she’s held about herself and others, but the story’s not so shallow to directly address that growth, so much as it shows us how Anna is able to naturally overcomes her anxieties given the right circumstances. Also important is the support that Anna receives from Setsu and Kiyomasa, the relatives that she stays with in Kushiro, isn’t overt, but provides an important support structure in helping Anna to find her way. The two are comforting, unquestioningly loyal, and almost weightlessly present without being cloying, false or naïve towards what Anna is feeling.

Sometimes I forget how many Japanese people have natural blond hair and blue eyes.

Every part of When Marnie Was There plays a significant part in helping you to really feel what’s going on.  The movie is visually stunning, displaying the potential inherent in hand-drawn animation, with a richness and presence that makes everything come alive. Many of the scenes have a painterly look that lends the story a level of timelessness and mysticism that would otherwise be missing with computer animation. Similarly, its musical score is enchanting, deeply moving, and is instrumental in delivering the movie’s emotional impact.

To be honest, When Marnie Was There is a tough movie to watch, but also a richly rewarding one. It’s deeply, deeply emotional, to the point that it almost borders on the nonsensical and hysterical at times, but, importantly, you never once feel manipulated to feel one way or another when you watch it. Its emotionality comes from a place of deep understanding and empathy, and it’s the type of movie that doesn’t have to knock you over the head and outright tell you that it’s a story about emotions, allowing the movie’s intentions to come through the strength of its storytelling and attention to detail.

Ultimately, When Marnie Was There is a fairytale and a sort of ghost story in its own way when you finally learn who Marnie is and what she means to Anna and the town’s residents, but it’s only haunting in the impression it leaves after its over, and like all fairytales, When Marnie Was There is only truly sad when it ends, because that’s when you’re reminded that it was all imaginary.

But then again, so is every story.

Thom’s When Marnie Was There final score