Well, hello there! Bet you weren’t expecting a review from me. But I figured I’d swing by during my fall hiatus and let you know what I thought of Mockingjay Part 1, the third instalment of the Hunger Games trilogy-that’s-actually-a-series-now-and-what’s-it-even-called-when-it’s-four-of-something-anyway.

In Mockingjay Part 1, Katniss Everdeen is struggling to cope with life now that District 12 has been destroyed and all of Panem is in open rebellion. She’s expected to be the Mockingjay, the face of the revolution, but it’s proving difficult when every minute is plagued by the thought of Peeta and the other tributes being tortured in the Capitol.

She manages to pull through in splendid fashion, using her innate awesomeness to be the Mockingjay and rally the country behind the flag of President Coin and District 13. There’s also some emotional stuff with Gale, who’s drifting further away from her and being fairly nasty about it.

But in spite of that, he goes on a dangerous mission to rescue the tributes from the Capitol and bring them back to District 13. And when that happens, Katniss discovers that President Snow systematically tore down Peeta’s mind and sense of self, then rebuilt it on a foundation of fear that leaves him an enraged husk of a boy.

Because being punched in the face also indicates deep mental trauma. Totally the same thing, right?

And, as the person sitting behind me in the theatre so succinctly put it, “See you next year.”

MP1 makes the previous two films pale in comparison, particularly with gut-wrenching scenes like Katniss standing atop a mountain of human bones and realizing just how many people died because of what happened in the arena during the last Hunger Games. There’s a deep level of emotion that was hinted at in the previous two but never quite tapped, like when Rue died or when Peeta was electrocuted by the fence.

This movie has moments like Katniss singing “The Hanging Tree” or, when a woman in the District 8 hospital asks about the baby, Katniss remembering what people thought of her and just how much they actually care about her, despite them not even knowing who she really is (not to mention that she wasn’t even pregnant). And those are the moments that stay with you, that impart deep emotions that you can’t quite shake.

Like the vague unease often associated with holding a flower.

Yes, the level of character development is amazing — at least for Katniss. She starts out as a broken woman trying to hold it all together, just telling herself what she knows and going from there. And from there she becomes the Mockingjay, a rallying call for the people of Panem, the voice for the voiceless and the face of a revolution.

But even at that highest point, she’s still struggling to make sense of it all. She’s in love with Peeta but also with Gale (don’t even get me started on love triangles; I don’t believe in them and I think they’re pretty darn schlocky, but what do I know), and it’s even more complicated by the fact that Gale is present and in pain, while Peeta is held prisoner and in an ever-declining state of health that Katniss can’t do anything about.

No matter who she chooses, someone will lose, and the only person who doesn’t ask anything of her is her little sister Prim. So the relationship between the two of them is the only solid foundation in Katniss’s life, which is CRAP SALAD because I know what happens at the end of Mockingjay Part 2 and it’s gonna be even worse than Rue.

Have an attractive picture of Gale to distract you from what he’s going to do.

Apart from Katniss, though, everyone else kinda seems to be revolving around her. Haymitch is sobering up, which is a nice change, and Effie has grown startlingly well accustomed to the spartan conditions in District 13, which is equally nice to see. But apart from them, everyone else seems stuck in a state of stasis.

They exist to define Katniss’s strengths and weaknesses, and while I understand that Katniss is the main character and thus expected to be the focus of much attention, it seems as though literally the entire world revolves around her, Mockingjay or no. And it’s been that way since the start: everyone thinks Katniss is awesome, even though she’s brusque and prickly, and they all want to be her friend.

Don’t get me wrong, she isn’t a Mary Sue, because no author in the history of Mary Sues would willingly drop themselves into this kind of world. All I’m saying is, it would’ve been nice for some of the characters to be better fleshed out and to have lives of their own outside of what’s happening with Katniss. And while that was at least somewhat true in the book, it’s missing here in the film. 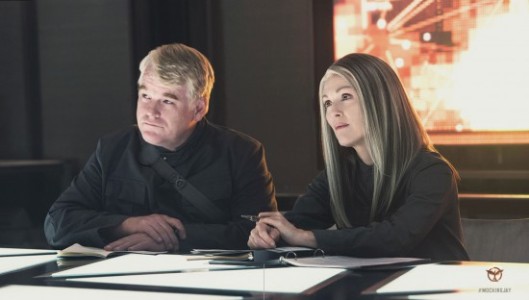 “You raise an interesting point. Now let’s get back to talking about Katniss.”

And that leads me to the final point: how true the movie is to the book. There are a few points missing, like Katniss’s old prep team being kept in awful captivity right there in District 13. I felt like that was important in the book because it highlighted the austere brutality of the district right off the bat, and it underscored the fact that not everything was on the up-and-up here.

There’s also the fact that nothing was said of Gale’s significant role in the army, especially his developing traps for the enemy (although I expect that to be in the last film, given the events therein). And let’s not forget the part where Katniss kicked Boggs in the face, because I was actually looking forward to that one (don’t ask me why because I don’t know. Poor Boggs).

Then on the other hand, there are parts in the film that weren’t in the books. I especially liked the attack on the dam while the people are singing “The Hanging Tree”; their sacrifice perfectly mirrored the sentiment of the song while showing a fierce determination going up against stoic brutality.

The other part I really noticed was that we got to see the rescue mission in action. It’s intercut with Finnick spilling state secrets on live television and Katniss trying to keep President Snow occupied while Gale and the others sneak into the Tribute Centre to liberate Peeta, Annie Cresta, and Johanna Mason.

It was skimmed over in the book because I think Katniss slept through most of it, so it was awesome to actually see the mission in action — successes, failures, manipulations, and all. And that was for obvious reasons: you can’t have the climax of a movie happen while the main character is out cold, so she was actively involved instead. And that was fairly amazing.

But here’s the thing. When I was a teenager, I wanted nothing more than to see all my favourite books perfectly captured on the big screen. I wanted eight-hour Harry Potter movies and a 39-hour miniseries of Lemony Snicket’s A Series of Unfortunate Events. I wanted every single last detail immortalized in glorious Technicolour, and I pitched an absolute hissy whenever it wasn’t done.

And then I grew up a little. I realized that books are a separate medium for a reason. They allow for that extra detail, those tiny little bits of characterization and connection we don’t realize until we’re re-reading the book for the hundredth time. They force the reader to use their imagination, to construct the world for themselves using their own experience and impressions as boundaries to the events within it.

Movies are different; they’re more self-contained. They build the world for you, asking for nothing more than your attention, so you can just shut off your brain and immerse yourself in the events at hand. At times they’re richer than stories, but only in certain moments. They only capture what’s immediately relevant to the story at hand. Films don’t do tangents, they don’t generally do side stories, and they ruthlessly eliminate that which isn’t vitally essential to the main plot.

Except for this riverside picnic, but you won’t hear me complaining, because Natalie Dormer.

So it’s unrealistic to expect a movie (which lasts three hours at its most generous) to follow the same guidelines as a book (which can take upwards of a day to read, depending on the length of the book and the size of the font). And that’s why movies can take more liberties with the plot when they’re adapting a book. It’s a chance for the director to tell the story from their perspective, prune some of the bits they deem unnecessary, and make the main plot more clear to the viewers.

Granted, sometimes this ends badly. Harry Potter and the Prisoner of Azkaban is proof positive of that. But sometimes you get picture-perfect adaptations like Mockingjay Part 1, and if you’re determined to find something bad in everything, you might realize that maybe the adaptation shouldn’t have been quite so perfect in the end.

I think there might have been a missed opportunity to expand on some of the smaller plot lines, for one thing. It would have been great to see Gale in his element as a trusted member of the army, to see him develop as a character outside of Katniss. That way there might be more sympathy around his character when Mockingjay Part 2 comes out and all hell breaks loose. 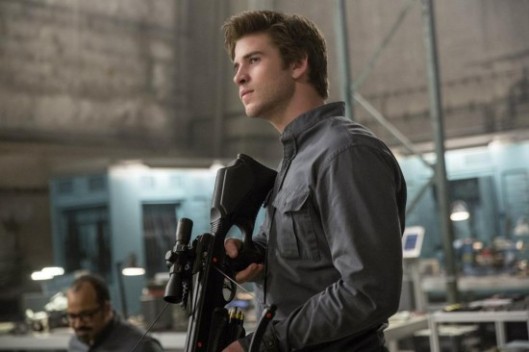 “They’re showing me using weapons to disastrously destructive effect. Could that be foreshadowing?…Naaaah.”

It would have been lovely to see Prim assisting with surgery rather than just saying she’s going to be trained as a doctor, because that would show the little sister becoming a woman in the harshest of circumstances. And I would very much have liked to see, apart from that brief side conversation with Plutarch Heavensbee, what President Coin is like when she’s alone.

It feels silly to criticize a great film adaptation for adapting too well. But it seems to me that when you transfer a story from one medium to another, the viewer should get a different experience out of it. They should feel something more profound, more lasting, than a few really well-done scenes.

Again, don’t get me wrong: this was an amazing movie, I’m giving it a high grade, and I’m going to buy the crap out of it on DVD. But if I wanted the story exactly as it was told in the book, I would have gone to my bookshelf.