After this you should probably get something real to eat

The cult of celebrity chefs may be one of the more peculiar developments of the early 21st century, but it’s a celebrity that’s at least a lot more earned than many of the other celebrities that have risen and fallen over that same time. Rather than trading explicitly in their looks, notoriety or leaked nudes, the celebrity chef must use his implicitly earned skills, often developed over years of a culinary schooling several times more difficult and demanding than your common business or dental schools (though who am I to talk, all I ever learned in school is how to write things down I hope make me seem thoughtful or clever).

However, it’s also true that the chefs for whom celebrity has come most naturally tend to be those who combine some level of photogenic intangibles and an unpredicted twist (e.g., they act crazy and wear sunglasses on the back of their head or… maybe they yell a lot), but there’s also a warmth in their tone and methods, an invitation to a world that’s not so far from our own that lets us all know that these are people often worth respecting, doing something much more worth watching.

I, for one, have always had a fondness for cooking shows that goes far beyond the expected, and it’s a fondness that’s served me well over the last few years of having to make my own food. Sure, I’ve screwed up a lot of dishes and I’ve never proven that my cuisine reigned supreme, but after so many hours of watching television cookery, there are definitely certain techniques and insights that have become relatively ingrained and instinctive in my processes, all without ever having studied or really paid all that much attention. And that’s real value, far more than society’s ever received from the latest episode of the Kardashians, even if one sometimes wonders how valuable learning the techniques and insights from watching hours of celebrity sex tapes could’ve been.

Chef is the story of one such celebrity chef whose public meltdown causes him to lose everything he’s worked for before learning the true value of everything he’s ever wanted. So pretty much the same basic underlying story as every other (or every other other) movie.

Food trucks. Is there any problem they can’t solve?

Preparing for a visit by infamous food critic and blogger Ramsey Michel, Los Angeles chef Carl Casper’s (Jon Favreau) ambitious but experimental new menu is kiboshed by restaurant owner Riva (Dustin Hoffman), who encourages him to stick to his proven hits. After his conventional, uninspired food is ravaged in Michel’s review, Carl sends the critic an insulting Twitter message (or “Tweet”), not knowing his comments would be seen by the public, causing a chain of events resulting in his dismissal. Seeking to return to a time ten years previous when he was called one of the edgiest chefs in Miami, Carl opens a food truck, giving him the chance to find his original inspiration and repair his relationship with his ten-year-old son, Percy.

Chef represents director and star Jon Favreau’s departure from the main-est of mainstream Hollywood after years of elves, iron men, cowboys and aliens, but make no mistake, this is still very much a mainstream movie, just not a particularly big one. Boasting the likes of Dustin Hoffman, Robert Downey, Jr. and Scarlet Johansson, Chef would practically be bursting at the seems with star power if not for the fact that the previous three names spend no more than five minutes on screen individually. Relying instead on the strength of director Favreau’s acting chops, which have mostly been spent portraying a doofy, badge-obsessed bodyguard to a superhero over the last six years, Chef has an engagingly down-to-earth quality that serves its theme and settings well. Newcomer Emjay Anthony puts in strong work as Carl’s son, who comes across as a real, likable and not useless kid, while even Sofia Vergara, as Carl’s ex-wife Inez, and John Leguizamo, as Carl’s sous chef Martin, manage to tone down their usual over-the-top natures to come across as actual people. The interplay between each of these characters comes through as genuine, with the real-life moments generally outshining any potential flights of fancy that the script demands. 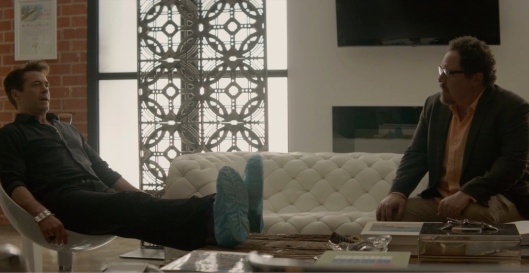 “So in this scene, Robert, I’m gonna need you to pretend you’re not the star of the movie.”

Chef’s other major strength lies in its clear obsession with food and food culture. Like I said earlier, I can’t explain why I liked watching cooking shows as a kid, but the way food is treated, the way its made, plated and shot, you can’t help but feel compelled to find out more and maybe even make something of your own. Going beyond the food itself, Chef touches on the techniques, background and philosophy of food culture without ever falling into the potential traps of an insipid foodie culture, featuring dishes as simple as grilled-cheese sandwiches to Mexican carne asada and New Orleans beignets.

At its highest level, Chef speaks to the heights we’re all reaching for in our most honest moments of self-expression, be it in our art, in our music or in our food, suggesting the potential of the genuine greatness waiting for all of us just behind the veil of banality that society more often than not chooses to drape itself in.

And then there’s Chef at its lowest level:

In a lot of very pointed and almost alarming ways, Chef plays like a child’s dream about his parents, with all the requisite conveniences and naiveté. From the perspective of son Percy, Carl is a largely absent father, while his mother Inez is some ill-defined but near-perfect and definitely rich mother who may or may not have some important Hollywood-type job (actress?). As is the case with many children who often take a backseat to their parents’ career development, Percy’s relationship with his father is strained, but as portrayed in the movie, this strain only reaches so far, where the worst Percy ever really receives is a disengaged father who can’t always find time for him. A trip into darker territory would certainly serve the film poorly, but trust me Percy, there’s a lot worse a father can do (and not do), and for many sons and daughters, mild disengagement is the best we ever got.  Though he did stick you with the name ‘Percy’, so I guess you are right to be a little mad.

So I guess in some cultures dads care about their sons and teach them things? Weird.

Later, when Carl’s food truck affords him the chance to mend their relationship, Percy is fully immersed, 24/7, as his father shares everything he really cares about with his son, an idyllic setting given the nature of Carl’s work, but again it seems just a little too convenient that Percy’s time off from school would come around at such an opportune time. Finally, Percy even has the chance to be a behind-the-scenes and eventually revealed hero, with his marketing efforts richly rewarded as their food truck becomes a social media sensation. Maybe that’s all an overly negative reaction from someone who spent virtually no time with a father who shared very little with his son even when they did have things in common, but all of the above feels like a kid’s idea of what being an adult is supposed to be rather than any harsh truths about work and family.

There’s a difference and a potentially huge gap between a feel-good movie and a genuinely good movie, and beyond its clear love of food culture, Chef isn’t a movie I would call very good. Technically proficient, reasonably conceived and well acted, Chef is also a movie incredibly removed from reality. Though chef Carl Casper’s self-destructive tendencies and his relationship with his son and former wife serve as the movie’s central points of contention, it avoids any real problems as everything really just falls into place, providing its characters with an obvious and easy path towards redemption and ultimate prosperity.

Chef is a feel-good movie worth seeing if you’re into food porn and general fun. On the surface, it’s not fundamentally different than 40-60 per cent of the movies out there already, erring far more on the side of hope and faith than loss and regret, and even though that’s not terribly realistic, sometimes it does feel better to see something more hopeful than harmful, a fact keeping the movie on the brighter side of the critical scale. But if you’re looking for a story with conflict or earned resolution, this isn’t it. It’s easy and breezy and almost meaningless, and its final scene is so insultingly cloying and naively ignorant, that it almost makes you choke, an ending that’s so bad and so feel good that, in and of itself, it pulled my score for the movie down by a whole point.

But at least now I know how to make a really good grilled cheese.