We’re back!  And with ghosts!

It was thirty years ago that Ghostbusters was released on an unsuspecting populace, and the world was never the same. Because the world is never the same. Frankly speaking and if nothing else, we change results just by measuring them, so of course the world was never the same. The film, both a critical and commercial success, rocketed Bill Murray, Dan Aykroyd and Harold Ramis to superstardom, while earning two Academy Award nominations, a top thirty rank on the American Film Institute’s list of best comedies, and launched an entire industry of cartoons, toys, and various other cultural minutiae.

But, while this year marks the thirtieth anniversary of the original film’s release, with all the commensurate screenings still available in your area, what a lot of people have forgotten is that this thirtieth anniversary is also the twenty-fifth anniversary of Ghostbusters II. Where the original is widely and roundly viewed as an untouchably seminal work, most regard the sequel with no regard at all. A hollowed-out retread of the original some call it. “It looks as if the filmmakers… simply didn’t try to do anything special,” said one notable film critic.

Earlier this summer we ran a potentially controversial review of Ghostbusters, one in which our resident “born in the ‘90s” GOO reviewer, Grace, proclaimed the movie to be “average”. To which I, as our resident “born in the mid-‘80s” (emphasis on the “mid”) GOO reviewer, proclaim… that I actually kind of agree. As for Ghostbusters II? Like the critics have said, just more of the same. Which is fine. It’s all fine. Honestly, why do you guys get so worked up about this stuff?

Five years later, the world (a.k.a., New York City), has almost forgotten about ghosts, giant marshmallow mascots terrorizing the city, and that schlubby, opportunistic force known as the Ghostbusters. And who can blame them? That’s like asking today people what the world was like before the App Store. Now only able to find work as book store owners, lab workers and television show hosts (plus I’m sure Winston’s still looking for a steady paycheck), the Ghostbusters’ current activities consist of little more than sideshow attractions until the arrival of a painting of a 16th-century Carpathian warlord and the discovery of a river of slime. And thus, “We’re back! And with ghosts!”

Hey, anyone ever figure out why it took five years for more ghosts to show up?

I think my favourite synopsis of Ghostbusters (and it applies equally to Ghostbusters II) comes from TV Guide:

It’s such a reductionist and overly literal view of the entire concept that misses the point to such a complete and utter degree that it tumbles all the way over into full-on hilarity. That description alone garnered a bigger laugh from me than anything else in the series. Anyway. 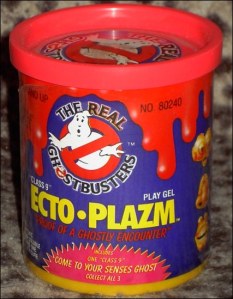 The best part about this toy was when you got it in the carpet and mom got mad.

After a vaguely paranormal occurrence concerning Dana Barrett, heroine/victim of our last adventure, we catch up with our heroes speeding to what turns out to be a kid’s birthday party, the kids deeply disappointed by them as well as the lack of He-Man mascots at their party (which was weird, because He-Man was pretty over by then, a live-action, Dolph-Lundgren-starring movie even having been released two years earlier), and all of that pretty much lines up with where Ghostbusters, as an intellectual property, was at that point at the end of one of our greatest modern decades. In 1986, shortly after the original film’s release, The Real Ghostbusters Saturday morning cartoon (so named due to a dispute with another cartoon release also called Ghostbusters [itself based on an earlier movie, The Ghost Busters, released in 1975]) was released to capitalize on Ghostbusters’ franchise potential, with an accompanying series of action figures, mascot toys and affiliated slime-based products, as was the style at the time. Oh how things have changed (today, there’d also be a video game and apps and a viral marketing campaign, and only collectors would be able to find or afford the rare “Venkman with green proton pack” variant action figure). At its height, The Real Ghostbusters had more than taken over the headspace of what most people thought of Ghostbusters, so by 1989, the second film also had the responsibility of appealing to a legion of kids who had seen the cartoon and played with the toys more than ever having seen the original movie.  But it was all starting to get a little old.

Remember the time the Statue of Liberty broke into the Manhattan Museum of Art? Or was that just another acid flashback?

It’s largely true that Ghostbusters II is a copy of the original, complete with paranormal activity surrounding Dana Barrett as a starting point, our heroes’ splashy, public (re)debut, romantic Peter-Dana (re)entanglements, the Ghostbusters being thrown in jail and needing the mayor’s endorsement again, giant, unnatural things walking around the city, and ghostbusting our way into some public place to vanquish an ancient evil. This is a movie, like the original, that has very little new to say (I kind of even think the stakes were a lot lower this time), instead showing us yet another series of notable events in the lives of parapsychologists with nuclear guns, but that spirit is really the spirit of the entire franchise: some scientists need to find something to do with their time and stumble their way into unexpected opportunity.  And we get to watch.

I was just a bit too young to have seen Ghostbusters II in the theatre, but probably like many of the children I outlined two paragraphs ago, I’m pretty sure I saw Ghostbusters II before Ghostbusters. It was okay, nothing special, but unlike a large part of the more mature viewers of the sequel, I didn’t view it as a lazy copy of the original. Sure, by the time I saw the original and put it together in my head with my knowledge of the sequel and the toys, I too viewed the original film as superior and could understand how every thing that followed watered down that first movie, but I still didn’t see what so many others saw in that first piece. For me, and I guess this is like how I view the original Star Wars trilogy or Alan Moore’s Watchmen, seeing things out of order of release date really gave me a different view on the whole thing, and as with those two examples, I also never thought that much of Ghostbusters. It’s funny (kind of), it’s entertaining (mostly), and I get it (I’m pretty sure), but it’s far from something I’ll ever revere or admire.

One of the things I remember most vividly from watching Ghostbusters II as a kid was being utterly terrified by the two main villains, Vigo the Carpathian and his transformed-into-a-ghost henchman Janosz. Maybe not woman-being-turned-into-a-robot-in-Superman-III terrifying, but definitely disturbing to a below seven-year-old kid. If nothing else, I think the hallway scene after Janosz visits Dana after the [Ghostbusters-induced] city-wide blackout is really well shot.

I can’t remember, human eyeballs usually emit light in total darkness, right? Like in the Simpsons?

Now, looking back, one of my favourite things about watching Ghostbusters II is seeing so many bygone character actors, recalling all of the things I’ve seen them in, and wondering what happened to them. Off the top of my head, I recognized Kurt Fuller, who played the mayor’s aid, and Brian Doyle-Murray, the psychiatric doctor, from Wayne’s World, Peter MacNicol, Janosz, from Ally McBeal (remember single-female-lawyer Ally McBeal?), and Kevin Dunn from Transformers and True Detective (two polar opposites that showcase how important the material can be in making an actor seem overbearingly incompetent or nuanced and considered). Sadly missing from this instalment was William Atherton’s Walter Peck, the actor having, by that time, moved on to starring in both original Die Hard movies as yet another a-hole.

I guess there’s more to talk about around Ghostbusters II than there is to say about the movie itself. In the end, and like its forebear, there’s nothing really wrong with Ghostbusters II. I like it, and it’s more than decent enough to leave on when I run across it on TV, but for a comedy it’s not really that funny so much as it has an unmistakable, irrepressible air of ‘80s whimsy. It’s far from standing up to critical thinking, but I think the thing that people need to understand (about both movies), beyond the paranormal, the comedy and the criticism, is that Ghostbusters is as much about New York City (or at least the idea of it) as it is about the story, these people or busting ghosts. Everything about the movies speaks to that “only in New York” attitude, where no one drives because there’s too much traffic, where the water in the dough is what makes the pizzas the best in the world, where paranormal activity is normal and accepted without explanation or examination, and where ghosts are everywhere, sh*t happens, someone has to deal with it, and who ya gonna call?