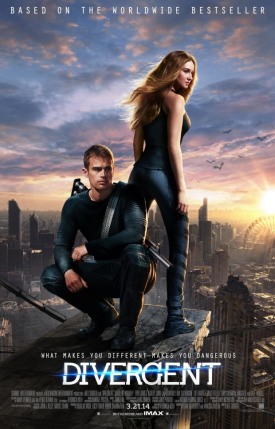 If you are extremely observant of things like the days of the weeks and the general passage of time, you noticed that we didn’t post a movie review last weekend. I’m gonna say right now that that’s my fault. It began with homework and a looming deadline, but as the week wore on and time continued to go by, I realized that I hadn’t posted a review yet for a very simple reason: I didn’t know what to write about or what I could possibly say.

Obviously this review is about Divergent, a movie based on a book that some people liked, a book that fell into the post-apocalyptic category, because that’s all the rage these days, apparently. But it’s going to be about some other things, too, because in the end, I have to borrow a page from Thom’s book and state the only fact I know for certain about this movie: it was a movie.

The story begins with a voiceover explaining the faction system. You should know right now that I think voiceovers are just lazy storytelling, so I don’t approve. Tris, a young not-really-member of the Abnegation faction, discovers that the prescribed personality test doesn’t work on her because she’s one of the rare, special little snowflakes known as Divergent. So she joins Dauntless, the place where all the badasses go, and immediately becomes a badass herself. 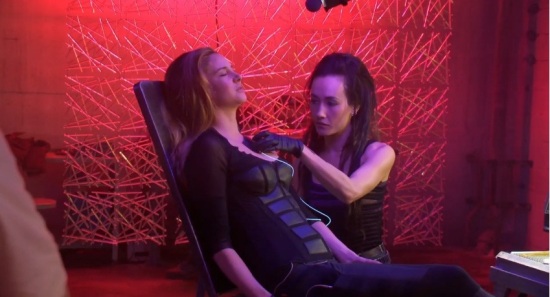 As evidenced by getting a tattoo, as all badasses do.

Then some things go wrong and there’s a plot to take down the Abnegation government and replace it with members of Erudite, who are the smart people and therefore the evil people. This plot means sort of brainwashing the Dauntless soldiers so they’ll kill all the key members of Abnegation, but Tris partners with her teacher/boyfriend (because he doesn’t date students unless they’re special snowflakes) to foil the Erudite plot and save the day.

I guess the movie mirrored the book on the important plot points, but it diverged (heh-heh) at some critical parts for what I think are decent reasons. First off, without expanding Kate Winslet’s role as Jeanine, there wouldn’t really be a major antagonist for the story, just a faceless faction that brings out Winslet as a cameo for a couple of scenes. So I think that makes sense overall; we need someone to hate, and it seems like a good idea to make that person the head of the opposing faction.

Then there’s Visiting Day, which isn’t a thing in the movie. To be honest, I didn’t think it made that much sense in the book; when someone chooses a new faction, that’s it. Faction before blood. You leave your family, friends, and home behind to join your new faction, and you don’t get to see them again unless your role in society calls for it. So it seemed more than a little odd to say, “You get an afternoon with your family so they can see how you’re fitting in and make sure that you’re wearing clean underwear.”

In the book, Visiting Day mostly served as a reason for Tris to meet up with her mom and discover that she, too, was a member of Dauntless. And the way the movie did that was much more organic. Visiting Day wasn’t a thing; Tris’s mom snuck in (because she’s Dauntless and can totally do it, even though she’s like twenty years out of practice), gave Tris the lowdown as quickly as possible, and skedaddled. Nice and clean.

And then there’s the last twenty minutes or so of the movie. That, too, made a lot of sense to change. In the book, Tris is taken away from the action so Erudite can execute her by drowning her in a tank. This fails because her mom rescues her, and they immediately go back to the action. What was the point of removing her from the scene at all, much less taking the time and bother to drown her? There isn’t one. In the film, they just take her out back to shoot her in the head. Much cleaner, much more realistic, and just way more practical when there’s a war on. 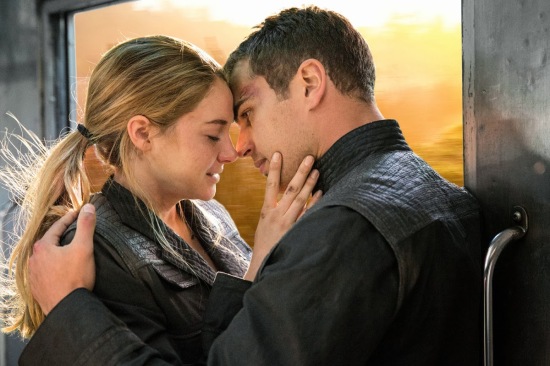 This movie is not a fan of “practical things to do while there’s a war on.”

The climax of the book is basically Tris having this emotional fight scene with her brainwashed boyfriend, whose name is Four because reasons, and calming him down long enough to shut down the program. But that didn’t make sense to me because why was no one supervising Four if he was the last line of defence for this plan.

So I like that in the movie there were members of Erudite on hand, that they interfered with the fight and used Four to distract Tris while they kept the plan on track. That seems much more reasonable for a faction that’s characterized by intelligence. And besides that, there’s a moment of triumph over Jeanine where Tris actually gets to lob a knife at her (there’s no other payoff for the knife training in the book, really) and use her to end the program. Dramatically speaking, that’s a great way to veer away from the established plotline.

Okay, so I think I’ve established that the movie paid service to its novel roots while making itself something more. But I think we need to discuss the overall problem here: post-apocalyptic fiction is seriously overdone. For whatever reason, a lot of popular young adult fiction right now, like Divergent, The Maze Runner, and The Hunger Games, is built on the ruins of our civilization. It demands that we somehow ruined the world and that the only opportunity to save what’s left of it rests on the shoulders of one single teenager who’s fighting a war and pubescent hormones. 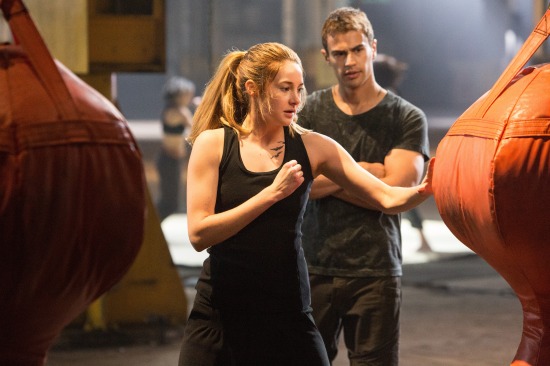 Hardcore physical training is a metaphor for sexual tension. Who knew?

I don’t know why it’s so popular. Maybe it’s easier to imagine our world in flames and to tweak a few elements here and there than it is to imagine a new one. Maybe it’s a metaphor for a new future rising from the ashes of the old. Or maybe it’s because it was always a genre, and the success of The Hunger Games just brought every other series to the front to clamour for attention.

Honestly, I don’t know. I feel like I should, because I eventually want to make a living as a fiction writer myself. I feel like it’s my job to analyze trends and talk about why certain books are popular at certain times. But the only suggestion I’ve come up with is that teenagers and young adults identify with characters who are strong because they grow up in a hard world.

It can be a world under the shadow of the darkest wizard of all time, a world of poor people whose children must fight to the death for the rich people’s entertainment, a world that tried to make itself better by dividing into factions that would preserve helpful and desirable characteristics, or a world where vampires sparkle in sunlight and like to date pasty teenage gir—no, sorry, I have no explanation for that last one. 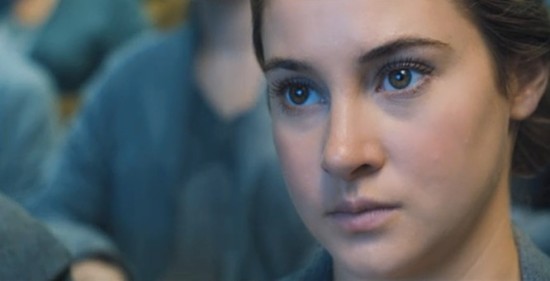 Something I’ve noticed is that most successful YA series aren’t built around average kids. One-shot novels like The Fault in Our Stars do well because they’re character pieces. But character isn’t enough to carry an entire series, so the protagonists of these series are given special characteristics around which massive plots are built. Harry Potter was The Boy Who Lived. Tris Prior was Divergent. Clary Frey can play a flute made out of bones (I’m assuming; I’ve never actually read The Mortal Instruments and have no intention of doing so). The only exception, as far as I can tell, is Katniss Everdeen, whose greatest characteristic was simply that she loved her sister.

Are these books successful because teenagers like to believe that they, too, can be something special? If that’s the reason, it’s not an entitlement thing; if anything, it’s because they find the real world too boring, too humdrum, too prosaic. And that’s fair enough; I loved The Chronicles of Narnia when I was a kid because a bunch of ordinary kids, whose lives weren’t at all in their own control, wandered by accident into a world where they found purpose and the control they desired. Did I want to be a queen of Narnia? No, I just wanted to find a magical land in my closet.

So maybe that’s it. Maybe it’s just a matter of taking the familiar and adding an element of the extraordinary to it, whether that’s hinting that Diagon Alley could be hiding just one street over, that the way your brain works might help you stop a political coup, that a skill you picked up to keep your family safe is the skill that helps you change the world. I dunno. It’s hard to make sweeping generalizations about YA fiction, especially when the stories shift rapidly across a bunch of different sub-genres, much like a person crowd-surfing across a cafeteria. 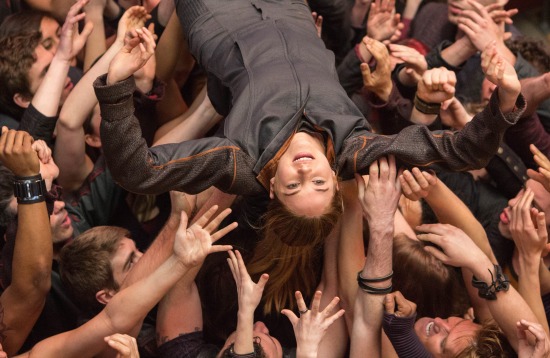 I just really wanted an excuse to use this photo.

Bringing all that back around to Divergent, here’s my verdict, having only read the first book and seen the movie: it was entertaining, it was a cool story, and it was a great way to spend an evening. But it was also familiar. It wasn’t groundbreaking, it wasn’t challenging, and it didn’t do anything new for the young adult world, because it was built on the foundations of previously successful stories. In the end, it was a movie, and it felt like one I’d seen before.