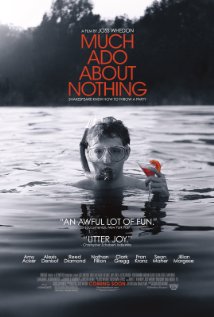 I like Shakespeare. I always have. I know there are some who think he’s stuffy, pretentious, and the single leading cause of boredom among high school students. But I’ve just always liked him. I once played a witch in my school’s grade nine production of MacBeth (I’m not altogether certain what the fillet of a fenny snake is, nor what use eye of newt and toe of frog are for, but apparently it’s important for witchy things). I understood every word of Othello. I love writing a parody script of Twelfth Night. Had I not ended up in communications, I would have made an excellent English major and subsequent long-term barista/waitress.

I don’t really know how else one is supposed to begin discussing an adaptation of something, particularly when that something has already been adapted countless times over the years. In the case of Much Ado About Nothing, I thought Kenneth Branagh’s version hit the nail on the head. It was clever, well cast (with the exception of Keanu Reeves—not even high school students deserve to listen to his mechanically delivered lines for two and a half hours), and true to the source material. Whenever I think of how much I like Much Ado About Nothing, that’s the benchmark for me.

And then this funny thing happened to me. My friend Kelsey told me to enter a contest, which I did, even though I never win things. And yet somehow I won two tickets to a screening of Joss Whedon’s Much Ado About Nothing, which I’d only been looking forward to for, oh, just every second of its existence. So I asked Boyfriend to come along, which he gamely did, and we sat there with our smuggled candy from Bulk Barn and wondered what the movie was going to be like.

“It’s going to be black-and-white,” I warned him. “And probably original Shakespearean.”

And yet we stared at each other in mute silence for the first fifteen minutes, wordlessly asking each other, What in the name of Sir Francis Bacon are we doing here? It was a long time since I’d last watched a Shakespeare adaptation, not including She’s the Man, and my brain was having trouble adjusting to this utterly foreign language. The phrasing that tripped so lightly and naturally out of the actors’ mouths landed heavily on my ears, filling my head with mushy dialogue I couldn’t process. And so I sat there with my chocolate-covered pretzels, resolving to drown my shame in candy’s sweet embrace.

“I wonder that you will still be talking, Signior Benedick,” Beatrice (Amy Acker) suddenly said. “Nobody marks you.”

My head snapped up. I understood her! Was it that Amy Acker’s voice is smooth and luscious? Probably. Was it that the words seemed to come from her heart, not just from her lips? Possible. Was it that it was a simple sentence understood by all? Well, yeah, okay. The point was, something clicked, and from that point on—though I occasionally stumbled with tricky bits of dialogue or mumbled lines from disinterested minor actors (I’m pointedly looking at you, Riki and Spencer)—everything flowed through my head without a filter and without the need for translation. And it was at that point that I began to enjoy the movie.

The plot is a simple one, and because it’s about five hundred years old, I’m just going to skim it:

Beatrice and Benedick hate the crap out of each other and take every opportunity to trade barbs. Claudio and Hero meet and fall in love at first sight. There are also two princes, one of whom delights in marrying everybody off (Reed Diamond) while the other delights in (or mildly enjoys) destroying the happiness of other people (Sean Maher). Some people sleep with each other, everyone likes to party, and holy hell is there ever a lot of drinking. Eventually everyone conspires to get Beatrice and Benedick together, at which point they become just completely adorable but still make fun of each other. After a series of honour-impugning complications (because it wouldn’t be a Shakespearean romance without adversity and a faked death), Claudio and Hero get married and everybody is happy except for Sean Maher, who gets arrested for being a jerk. Also, Nathan Fillion is an ass. 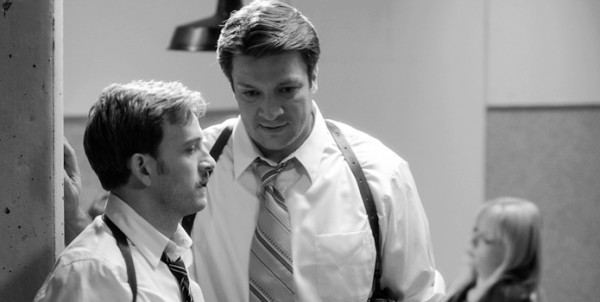 Pictured here: a wise fellow, an officer, a householder, and as pretty a piece of flesh as any is in Messina. Mmm, yeah.

The story is identical in every way, regardless of who makes it or who takes which part. So what makes this most recent film, just another addition to a long line of adaptations, remakes, and homages, stand out? For one thing, it’s set in modern day. Now, normally that would give me pause. Shakespeare doesn’t translate well to modern times. A rather famous Twelfth Night adaptation, She’s the Man—which, don’t get me wrong, I enjoyed way more than anyone has the right to enjoy anything—was set in modern day, and it was a travesty. I mean, other than the catfight in the bathroom, it was hardly even watchable (which doesn’t mean I haven’t seen it a million times, though). The storyline was completely adjusted, the dialogue was stilted, and it tried to pass off Channing Tatum as a sixteen-year-old. And I don’t even think I need to explain to you what was wrong with Baz Luhrmann’s Romeo + Juliet (hint: a Friar in a Hawaiian shirt). So when I say Shakespeare and modern day don’t go well together, it’s entirely possible that I’m missing out on some fantastic visual experience starring the incredible talents of Anne Hathaway, but I rather doubt it.

But modernity made Much Ado About Nothing so accessible. The men wear suits, the ladies wear sundresses, the house has running water, even the iconic shot of Fran Kranz sitting in the swimming pool with a martini and a scuba mask—all of it has something so quirky about it, but not in a way that appears forced or alienates the viewer. Everything feels completely natural, and I think that’s due in large part to the cast.

Most people familiar with Joss Whedon’s body of work are aware that he has a large group of actors he favours, Nathan Fillion being perhaps the most well-known. Both Amy Acker (Beatrice) and Alexis Denisof (Benedick) were on Dollhouse, along with Fran Kranz, Reed Diamond, and Ashley Johnson. Another half a dozen actors were in Avengers, with more overlap IN Firefly, Buffy, Angel, Cabin in the Woods, and even in shows that have nothing to do with Joss Whedon, like Private Practice, How I Met Your Mother, and Castle. These actors have worked with each other for years, and they’ve formed a wonderful working relationship as a result. They have incredible chemistry with each other, and they play off one another in a way that comes across so naturally that it makes you wonder how much of the action is improvisation.

Take the scenes where the supporting actors are trying to push Beatrice and Benedick together. They’re talking about the feelings the two Bs supposedly have for each other, and both Beatrice and Benedick react appropriately—in Beatrice’s case, by falling down the stairs with a basket of laundry. It’s impossible for me to explain why I was dying of laughter during those scenes because describing it completely robs them of their charm. It was hilarious yet realistic, and you could tell the actors were enjoying themselves enormously. 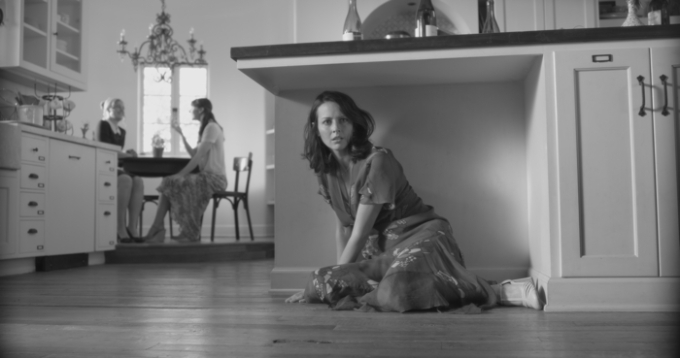 “Did they hear my heels clacking violently against the floor while they were talking quietly not ten feet away? Nahhh.”

That was another part of it. If you look anywhere on the Internet for Much Ado About Nothing, you’ll stumble across the fact that the director filmed the movie in twelve days. At his house. Joss Whedon basically had some of his favourite coworkers over for a Shakespeare party and filmed it, and I was lucky enough to be able to watch the result. Everyone seemed so at home in Whedon’s house. I’m sure most of them had been there before, and they all knew their way around. The house has some confusing twists, turns, and connecting rooms, but the actors seemed to instinctively know where they ought to be, which lent more familiarity to the setting. I was watching the action progress in the characters’ natural habitat, and it was that much more special to me because I knew it wasn’t just a set.

That, I think, is the greatest charm of Much Ado About Nothing. It feels lived-in. It feels comfortable. It feels natural. It pushes at the edges of Shakespearean drama without straining them at all. It feels like watching a group of people who talk funny and live oddly and get married after knowing each other for only a week, but it makes sense. The language doesn’t feel disjointed or incongruous, and it was even cut in certain places to allow for greater clarity of story. Everything flows, and that’s not something one normally sees in an adaptation—and sometimes not even in a straight-up copy, complete with gowns, codpieces, and men in women’s clothing.

Were there problems? Of course there were; no film is perfect, not even one directed by Joss Whedon. Some of the actors weren’t good choices (I’m still looking at you, Riki and Spencer). It made me uncomfortable to see Leonato (Clark Gregg) freaking out at Hero for being an alleged slut, because I’ve always instinctively felt like he’d be the best kind of dad, who’d defend his daughter no matter what because he’d never listen to a word against his girl. It was incredibly weird that Conrade was a girl and that the Watch kept referring to her and her cohorts as “masters,” because she’s quite obviously female, but whatever.

But those problems feel small and petty, and to me, they really don’t detract from my enjoyment of the movie. It was rich without being overwhelming, dramatic without being soapy, and sweetly romantic without being nauseating. And all that balanced perfection makes me wonder: why was it shot in black-and-white? I’m sure there are all sorts of artistic reasons for that, but I’ve come up with a reason I like the best. Because colour is distracting; that ties in with the modernity of the film. Keeping things cool and familiar lets the dialogue shine, where normally it’s the most uncomfortable part of a Shakespearean story. In a black-and-white film, the voices provide the colour. Anything else would be overpowering. 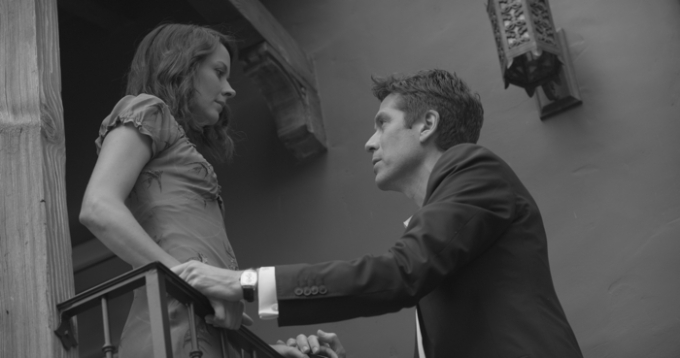 I waited a long time for Much Ado About Nothing. If I’m being completely honest, it’s not what I expected. I don’t even really know what I expected. Probably the same kind of thing I’ve been seeing for years, actually: Shakespearean actors with British accents and fancy doublets, all rendered in gorgeous Technicolour. I wasn’t expecting this. But am I disappointed? Not at all. I don’t know how I ever missed it, particularly for someone who values simplicity, but it’s something Shakespeare benefits from. For a writer both renowned and despised for his flowery, complicated prose, a little simplicity in the filmmaking can never hurt, only enhance.

Also, Nathan Fillion is an ass.