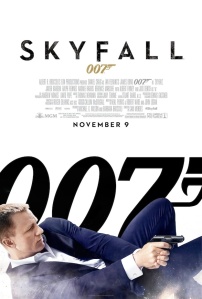 Skyfall is one of those movies that terrifies me.  It occupies my mind, disrupts my waking life, and pervades my slumbered thoughts.  It’s one of those movies that not only distracts me, but makes me nervous the longer I go after its release date without having seen it.  Y’know that feeling, like everyone’s made some wonderous discovery and you’re the only one left out?

As much as I thought Quantum of Solace was, on balance, decent, after the promise of Casino Royale, it felt a little bit like stalling.  In a way I felt cheated — the entire wait after Casino Royale brought us nothing more than this mediocre follow-up?  So after all the glowing advance reviews, particularly from the perspective of North America where we got the movie two weeks later, it was hard not to be screw-my-homework-nothing-else-matters excited about Skyfall.

But I did my homework anyway.  And that may have been for the best.

We open with Bond in pursuit of a stolen hard drive that contains the identities of undercover agents in terrorist organizations because that’s espionage story writing.  Accompanied by new (at least to us) MI6 agent Eve, the duo give chase all the way until Bond is shot, giving way to a fairly traditionalistic Bond opening sequence.  Similar to Die Another Day’s opening sequence, I really liked this plot-driven opening wherein the fantastical imagery is directly informed by what just happened in the story.  On the other hand, I’m starting to miss Bond openings that are completely unrelated to the rest of the film.  It just gives Bond a greater sense of activity, like there’s lots of things he does, even/especially when we’re not looking.  For your sake, I hope me telling you that Bond is shot isn’t a huge spoiler as that was a central part of pretty much every trailer and commercial.  It’s just that there was some moron beside me in the theatre who audibly exclaimed when he saw the scene, like he had no idea it was coming.  Pray that wasn’t you, oh media-obsessed reader(s).

With Bond missing, presumed dead, we then move to Judi Dench’s M as she struggles under the weight of filling out Bond’s obituary and under the pressure of Ralph Fiennes’ Gareth Mallory, Intelligence and Security Committee Chairman, who is insisting on M’s retirement.  Soon after M’s meeting with Mallory, the MI6 offices are blown up, Bond returns from his self-imposed “death”, and the game is afoot.  For various reasons, Bond is lead first to Shanghai, then Macau, sleeps with an otherworldly beautiful Bérénice Marlohe, meets the villain (who, for semi-interesting reasons, is after M), captures the villain, loses the villain, narrowly saves M, and the stage is set for the final confrontation.  Oh yeah, and gay innuendoes.  It’s a testament to Craig and Bardem that Skyfall makes gay innuendo not only palatable to pretty much all every member of the audience, but actually kind of cool.  I almost can’t wait for the chance to tie some ruggedly handsome guy to a chair to engage in some gay innuendo.  Almost.

So basically a bunch of stuff happened, all reasonably riveting, but, unfortunately, largely predictable.  As I watched Bardem’s Silva, imprisoned in the catacombs of nu-MI6 HQ at the movie’s mid-way point, I thought to myself that it’s too bad for James Bond that he lives in a world without James Bond movies.  Otherwise he would have seen most of what was coming next before it happened. 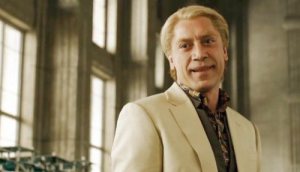 Bardem’s Silva — All there is to know about fear?

As far as characters go, Bardem’s Silva almost steals the show.  We may have already had Le Chiffre’s weeping blood and Dominic Greene’s annoying face as villainous deformities, but Bardem’s Silva is full-on freak right from the word go.  Freak in a flamboyant way.  Freak in a revelling-in-his-own-freakishness way.  Freak in a crawling-under-your-skin and causing-you-to-remember-repressed-traumas way.  Bardem is a delight to watch on screen as he fully embodies the character and carries a film that may have otherwise been relatively barren.  And when I say “delight”, I really mean it.  I hate using the word “delight”.  It’s just too bad that there’s very little mystery to be solved, his plans are so obvious, and he’s dispatched without any major physical confrontation.  Oh yeah, spoiler alert, Bond beats the villain.

At this point, it seems like a disservice to refer to the female leads as merely Bond girls.  Iconically, it’s certainly an important role, but Naomie Harris and Bérénice Marlohe bring a toughness and competence to their roles that far oustrips the days of Holly Goodhead or Kissy Suzuki.  Harris in particular was great as Eve.  She brought just the right level of attitude to the character she eventually becomes.  You really couldn’t ask for any more from her, and even though Marlohe’s Séverine is probably technically more attractive, Harris’ Eve, for her intelligence, is so much hotter overall.  As for Marlohe’s Séverine… eh….  Like Bardem’s Silva, Séverine could’ve been truly great if she was given more to do.  She looked great (and actually really dangerous) in her primary scene, but almost before we know it, she’s gone.  Maybe all she needed was a name like Pussy Galore to leave a stronger impression.  Or maybe she could’ve done something worth doing beyond just advancing the plot.

The inversion of the Bond-Q age relationship works really well, and Ben Wishaw carries the Q character forward in a way that’s respectful and reminiscent of Desmond Llewelyn (and in a way that John Cleese’s portrayal never could’ve been).  Even Wishaw’s floppy, full-bodied hair reminds me of Llewelyn’s combover.  At this point in the franchise, I’m also glad to see a lack of crazy gadgetry.  The Bond-Q exchange at the gallery knowingly skirts around this issue without being overbearingly meta about it.  Similarly, and as many have noted, from the return of the original Aston Martin DB5 (with many of the original modifications) to the locales visited to the remarks made by the characters, Skyfall is filled with self-referential moments that manage not to shove themselves up their own asses.

As is standard with Judy Dench by now, as M or in any other role, we get another standout performance.  Unlike in any previous Bond, in Skyfall Dench is given a lot to do, and she pulls it off better than any of us could reasonably expect.  There’s an obvious mother-son relationship being drawn between M and Bond throughout the film (and no, she isn’t actually Bond’s mother even if he calls her “mum”), and it helps with the film’s final pay off, particularly as the final set piece feels like it belongs in a different kind of action movie.  Albert Finney’s Kincade, plays a surrogate father figure to Bond in the movie’s latter half, and that’s pretty well done too.

Other than the relatively uninspired plot, the only really disappointing part of Skyfall is that Bond never really has to overcome losing a step.  Introduced as an element of danger, as an interesting dramatic question that propels the early parts of the film, and as an excuse for one of the better intros to an opening sequence, Bond still needs to overcome having been shot, almost to death.  And while we’re told that he didn’t pass the tests for active field duty, other than missing a few targets, not once did I see any reason for Bond to fail these tests.  If that’s failure, it’s hard to imagine how great all the other double-0s must have been.

In the end, I really did like Skyfall.  But mostly in the end, not as much throughout.  While Skyfall really can’t beat Casino Royale (not even close), by the end, especially with that ending, it’s hard not to feel an incredible amount of comfort, even as the conclusion sharply departs from the previous two films in favour tradition.  There’s a sense of everything in its place, and it’s hard to imagine anyone not, consequently, having a huge grin on their face as the credits begin to role.  After the emotional rollercoasters of the previous Daniel Craig-Bonds, Skyfall might not be the Bond we deserve, but it’s the one many of us wanted anyway. 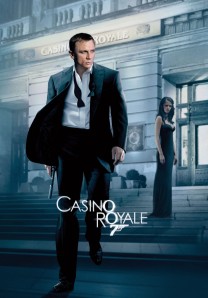 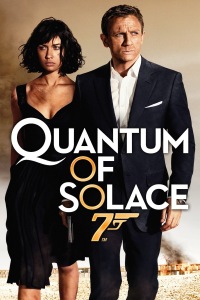