The Expendables 2 images courtesy of Lionsgate

There’s something to be said for a movie where, of all of its stars, Jean-Claude Van Damme gives the best acting performance.

And that something to be said? F*cking awesome.

That’s how I wanted to start this review, and, after a moment of contemplation, I went ahead and started it that way.

Even though it’s a lie.

At this point, we all know what the Expendables is, not just from seeing trailers, or the fact that this is the second in the series, but because… you just know… you can tell, even without any real inspection. Once you’ve mentioned the names Sylvester Stallone, Jason Statham, and Jet Li, it’s pretty clear that you’re talking about an action movie, and probably a very self-reverential/referential one. And there’s nothing wrong with that.

I’ll go on the record as saying I enjoyed the original Expendables, though I don’t remember much about the plot and I’ll probably never do a formal review of it. I’d give it a solid 7. In other words, OK-Good. I walked into The Expendables fully expecting what I got, and I don’t see how anyone armed with a full knowledge of what to expect could have been disappointed with it.

Okay, so the camera was too close and quick-cut during the Dolph Lundgren-Jet Li fight, but hey… that’s American action movies. The thing about the original Expendables is that there are several f*ck yeah moments laden throughout. The opening scene was great, not overtly bloated, and it set the stage for the rest of the movie. Jason Statham’s knife-throwing fight was not only well-choreographed, but also well-executed, and punctuated with the right amount of action-hero male camaraderie. And for all of its flaws, you could at least feel the Dolph Lundgren-Jet Li fight physically, and even somewhat spiritually because the duo’s animosity towards each other had been well [enough] established.

So what’s so wrong with The Expendables 2? It’s not that it’s a very self-aware film, though it did get a bit grating by the end when all of Sly, Arnold, Willis, and Chuck Norris were assembled together, trading each other’s trademark lines.

The problem is, unlike in the original, The Expendables 2 doesn’t feel like it was made from the point of view of asking “You know what would be awesome?” It feels more like, “How do we shuffle so many characters around?” “How do we get Statham’s character away from Stallone’s so that Stallone can develop a relationship with a new character?” “How do we write Jet Li’s character out, ‘cause he doesn’t really want to be in this one?” “How do we get Arnold Schwarzenegger’s character out of this scene, ’cause he’s only doing an extended cameo?” With thoughts like that on their mind(s), the writer(s) didn’t seem to have any time for questions like “How awesome would a Jet Li-Van Damme fight be?” “How awesome would a Stallone-Schwarzenegger fight be, ’cause I don’t think we’ve ever actually seen that.” “Hey, we’ve got Scott Adkins in this one, maybe we should give him a decent fight scene?” 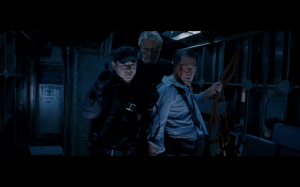 Bye-bye, Jet Li, off to a better movie

While we’re talking about cast, let’s take a look at that problem. It’s pretty obvious that this isn’t going to be an intricate, character-driven film by any stretch of the imagination. With a cast of more than eight headliners, all of whom have held lead roles in several other films, it’s probably too much to ask for much more than basic lip service, but characters like Terry Crews’ Hale Caesar, Randy Couture’s Toll Road, or even Lundgren’s Gunnar Jensen (whose character almost had what could be called an arc in the first film) are relegated almost entirely to the background.

For all of the disappointment of Jet Li’s character’s absence throughout most of the movie, he at least had a pretty good fight scene at the beginning. I don’t see why Crews, Couture, and especially Lundgren couldn’t have gotten the same. We don’t need much, just some f*ck yeahs. The f*ck yeah moments are what define movies like this and characters like these. And, unfortunately, even the film’s climactic battle between Stallone and Van Damme was more “f*ck no, that was boring” than “f*ck yeah, that was awesome.” All I have to say about that final fight is, “Yeah, Jean-Claude, cocaine is a hell of a drug.”

If, like me, you’ve gotten this far into the review and noticed that not once has discussion of a plot come up, you might be thinking to yourself how that’s kind of odd in a review. But that’s the thing. As much as we might like a plot, we don’t need one in a movie like Expendables 2. That’s not the problem.

And as much as the movie may be informed by the Expendables crew avenging the loss of a member, the rookie character played reasonably well (and incredibly cliched) by Liam Hemsworth, that doesn’t matter. As I’ve said from the beginning, we should already know what to expect when we walk into a movie called The Expendables 2, starring Stallone, Statham, Li, Lundgren, Norris, Crews, Couture, Hemsworth, also Van Damme, with Willis and Schwarzenegger.

We should expect to be yelling “F*CK YEAH!”